Surprisingly, it has been a while since we’ve had a television wrap-up here at Cinema Smack. However, it’s getting to that time of year where there are a lot of shows being pumped out constantly. Over the past few years, the science fiction genre has been given a serious face lift with some excellent films and TV shows coming out. Titles like Arrival, Blade Runner 2049, and Westworld have set the new standard for what the genre can offer. Of course, Netflix isn’t one to be left out of a party. With shows like Stranger Things and Black Mirror, the streaming company has their own repertoire of quality entries to the genre. With their newest sci-fi show, Altered Carbon, Netflix has another hit on its hands despite some crucial flaws.

The show is an adaptation of Richard K. Morgan’s 2002 novel of the same name. Altered Carbon is the first of a trilogy of books following the character of Takeshi Kovacs. A feature film adaptation was originally optioned by showrunner Laeta Kalogridis fifteen years prior to Netflix picking up the show in January 2016. The dense world of the source material is a perfect match for Netflix’s episodic structure. It’s also a welcome addition to the cyberpunk sub-genre of science fiction with its usage of advanced technology and its portrayal of the grimy underbelly of society.

The plot sees Takeshi Kovacs (Joel Kinnaman), a former Envoy and mercenary, as he wakes up 250 years into the future. His “cortical stack” (basically a human memory card) is put into a new body (AKA sleeve). He’s forced to choose whether to remain imprisoned for his previous crimes or help solve the murder of the wealthy Laurens Bancroft (James Purefoy). Luckily, Bancroft’s memories are all downloaded to a satellite which allows him to cheat death. Bancroft believes that he was murdered while all signs point to suicide. Throughout the show, Kovacs assembles a crew of on-again/off-again allies as he investigates Bancroft’s murder.

From the very beginning, there’s a lot to digest in Altered Carbon. While it can be a little confusing at first, each episode does a pretty good job explaining how the world of the show operates. Essentially, no one truly dies unless their stack is destroyed as they can be re-sleeved into a new body at any time. For example, Kovacs is actually Japanese but is re-sleeved into a Caucasian body. It’s actually an interesting idea and there are numerous different plot points that revolve around this. One gripe with this is that, unlike something like The Matrix where the characters actually plug into a machine, you never see the technological procedure. It’s not a huge issue but it would help viewers further understand some of the goings-on throughout the show. 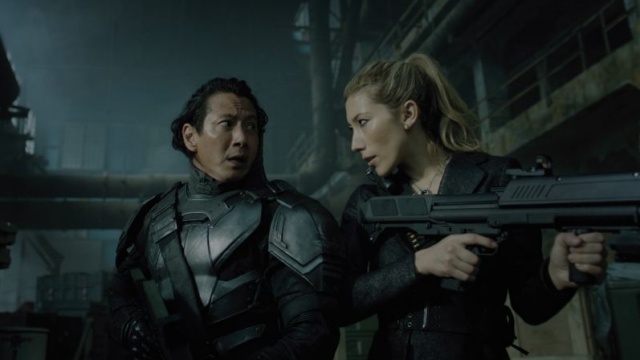 When comparing Altered Carbon to other sci-fi properties, it has a lot of overlap with classic titles. Along with The Matrix, it shares ideas with Blade Runner and its implanted memories. The show also feels reminiscent to the Deus Ex video game series. Both titles contain human augmentation technology. Without spoiling anything, one character’s strength is affected and another has the ability to become transparent. There’s also the question as to whether some of this technology should be acceptable at all. Although, this question in Altered Carbon is breezed over instead of it being a major sticking point as it is in a game like Deus Ex: Human Revolution.

While Joel Kinnaman was laughably bad in Suicide Squad, he leads a solid cast in Altered Carbon. Here, he feels like a legitimate bad ass anti-hero and you’re with him every step of the way. Martha Higareda plays Lieutenant Kristin Ortega and is convincing in her role as well. She quickly attaches herself to Kovacs to figure out exactly what he’s up to and also for personal reasons. Vernon Elliot (Ato Essandoh) also aligns with Kovacs as his wife and daughter are taken from him in different ways. Perhaps the best character in the show is the artificially intelligent proprietor of The Raven Hotel, Poe (Chris Conner). Before Kovacs arrives, Poe, based on the writer, hasn’t had a single guest in 50 years. Chris Conner is undeniably witty and charming as Poe and is a useful ally to the main character. 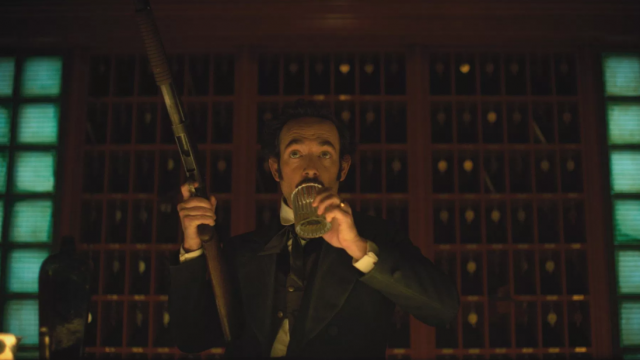 The first six episodes of Altered Carbon are great. They quickly intrigue and get you involved in an unfamiliar world. Then, the show hits a sharp decline. The seventh episode is still solid but it’s a definite turning point. It explores the backstory of Kovacs as a mercenary. The episodes that follow cover a storyline that feels so abrupt and unnecessary to the main plot. Prior to the end of episode six, there’s very little indication that the story would take this direction. We won’t spoil it here but the idea feels rushed and also meandering at the same time. You wonder why the characters are so wishy washy on the decisions that they’re making. The relationship between two characters specifically is a bit strange and a little too possessive. For all of the goodwill that the first half of the season builds up, it flounders badly in the end.

Even through the show’s iffy ending, Altered Carbon is still a series worth watching. Again, the first six episodes are fun and provide satisfying action, suspense, and storytelling. The story is at its best when it’s a simple detective story with Kovacs as its focal point. When it trudges into the drama riddled final episodes, it loses much of its mystique and the murder investigation is almost completely forgotten about with a tacked-on solution. Regardless, it’s likely that the show will return for a second season and, as long as it learns from its mistakes, that’s not a bad thing. At its best, Altered Carbon is a worthy piece of sci-fi television. If Netflix gives viewers more of the world and its inhabitants instead of needless drama, the show will become a standout for the streaming giant.