With the multitude of films that are released every year, sometimes one just falls through the cracks. Today, we’re reviewing Sam Raimi’s Drag Me To Hell just in case you missed it…

There was a time when Sam Raimi wasn’t just known as the man who brought Spider-Man to the big screen. At one point, he attained cult status as the creator of The Evil Dead franchise. Raimi, with childhood friend, Bruce Campbell, as the lead, took the simple idea of a group of teenagers in a cabin in the woods being haunted by spirits and turned it into an underground phenomenon. The Evil Dead spawned two sequels, a remake, and a television series which is currently in its second season. Following the critical backlash of Spider-Man 3 in 2007, Raimi redeemed himself when he returned to his horror roots with 2009’s Drag Me to Hell.

Raimi has never seemed to take himself too seriously in his career. For the most part, his films are original, fun, and full of humor. Even his work in the horror genre is the same. The Evil Dead and its sequels belong to the horror sub-genre of splatter or “splat-stick.” Obviously a spin on slapstick comedy, “splat-stick” films are chocked full of gore as well as comedy. Drag Me to Hell was made in the same vein. After leading such a big budget Hollywood franchise like Spider-Man, it was surprising to see Raimi go back to horror. Drag Me to Hell may not share the Evil Dead name, but it’s definitely a spiritual successor to the series.

Christine Brown (Alison Lohman) is a sensitive and insecure loan officer at a bank. After an old, gypsy woman named Sylvia Ganush (Lorna Raver) begs for a loan extension on her home, she curses Christine after she’s declined. Following the curse, supernatural occurrences begin to haunt Christine at every turn. She confides in a fortune teller named Rham Jas (Dileep Rao) who helps her along the way. Meanwhile, her boyfriend, Clay (Justin Long), doesn’t understand what’s happening to her but still does everything he can to help her unconditionally. 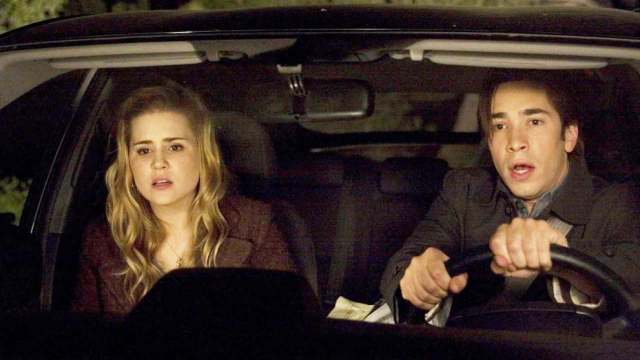 Unlike Ash from the Evil Dead series, Christine is not nearly as crafty or threatening to the forces that haunt her. Actually, her character is kind of pathetic. She’s mostly unnoticed by her peers, other than Clay, and there are a few instances where she dresses up or puts on makeup to garner more attention. She previously had a weight problem that’s addressed a few times through camera shots, conversation, and photos. It seems that every time she tries to boost her self esteem, she gets shot down harder than ever by the other characters and spirits in the film. Essentially, the poor girl is tortured more for wanting to better herself. Alison Lohman does a great job as the character and it’s easy to feel for her during the entire film.

One of the unsung highlights of the film is the music. There’s a sinister yet somewhat playful sound to it which is perfect for what Raimi excels at. The score was composed by Christopher Young, who also worked on Hellraiser, and a lot of the same elements that made that score great are at work here as well. There’s a gothic feel to it with a choir, organ, low horn sections, and a high pitched recurring violin theme, creating a sinister piece of music. Just like with Hellraiser, when you hear that theme, you know something bad is about to happen. 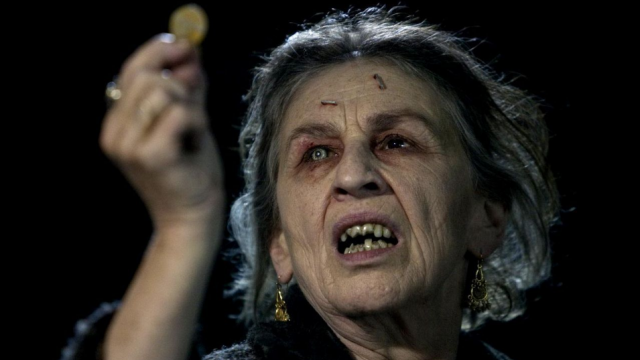 The highlight of Drag Me to Hell, though, are the special effects. Like with the rest of the film, there are some that look a bit comical (i.e. the goat scene) but it’s a near certainty that those spots are intentional. Poor Alison Lohman gets the bulk of the dirty work in this film. Like Bruce Campbell before her, Raimi loves punishing his actors with practical effects. Blood, maggots, and green slime are all at play during some of her best scenes. Also, there’s some good makeup work on people possessed by the spirits. Although, there are times when it just looks a little too much like something out of Evil Dead 2. Renowned artists, Greg Nicotero and Howard Berger, most recently known for The Walking Dead, head the special effects team on the film.

Overall, Drag Me to Hell is a fun film stuffed full of action, comedy and bodily fluids. Its only real downfall is that it’s a lot like Raimi’s previous work in the horror genre. In saying that, the film certainly holds good company and is entertaining enough on its own to warrant a watch. There are just too many amusing aspects of the film to fault it too much. Again, Alison Lohman needs to be praised for her performance as such a sad character that basically gets punished the more she fights back. While Drag Me to Hell may not trump The Evil Dead or its sequel, it proves that there is lasting interest in these types of films and Sam Raimi still knows how to provide the goods.