Within the horror genre, specifically with slashers, it’s only natural to look for a motive of the killer. Even unstoppable monsters like Jason Voorhees and Freddy Krueger have a reason for hunting their prey. In some cases, though, the fear of the unknown can be just as effective. With films like The Texas Chain Saw Massacre and the original Halloween, you aren’t really sure why the killers do what they do. A more modern example of this would be Bryan Bertino’s 2008 film, The Strangers.

Bertino, who wrote and directed the film, originally submitted his script for a Nicholl Fellowship with the Academy of Motion Picture Arts and Sciences. The film was sold to Universal Studios and released under their Rogue Pictures subsidiary. Mark Romanek signed on to direct, though, he eventually dropped out due to not being given a bigger budget. Despite his lack of directorial experience, Bertino ended up being hired on to direct following Romanek leaving the project.

The film follows James (Scott Speedman) and Kristen (Liv Tyler), a couple whose evening takes a dramatic turn. Following a friend’s wedding reception, James proposes to Kristen who declines and puts an immediate strain on their relationship. While at James’ childhood summer home, the couple receives a knock on the door from a young woman asking for “Tamara.” From here, three masked assailants, played by Kip Weeks, Gemma Ward, and Laura Margolis, begin terrorizing James and Kristen by pounding on the doors and playing mind games with them. 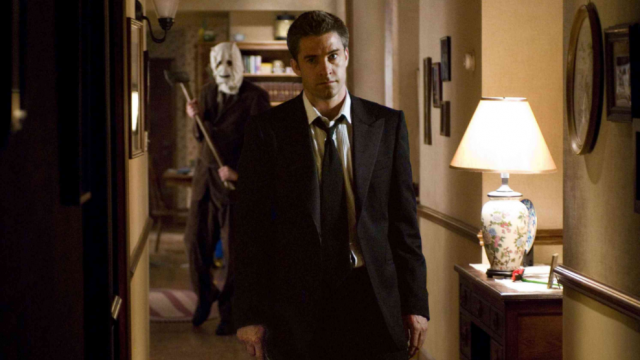 While watching The Strangers, the first thing that comes to mind is its influences. It’s clear that Bertino took inspiration from the Manson Family murders. From the remote location of the house to the brutal nature of the events that transpire, the film frequently reminds of the infamous 1969 crimes. Bertino has also claimed that he was inspired by real events from his own childhood. Supposedly, people came knocking at his door and asked for someone who didn’t live there. Bertino later found out that the people had been breaking into the houses they visited if no one answered. Others have suggested that the film is based on the unsolved Keddie cabin murders of 1981 or even the French film, Them, which was released two years prior to The Strangers.

The film has a small cast and it works for the better. In fact, there are actually more villains than main heroes which is a change of pace. Often times, horror films aim for a body count. That’s not the case with The Strangers. It’s all about the psychological breakdown of the two main characters. Between the knocks on the door, moving items inside the house, and vandalizing the couple’s car, the three strangers torment their targets until they’re physically, mentally, and emotionally drained. There are a handful of other characters that make brief appearances including Glenn Howerton of It’s Always Sunny in Philadelphia fame. The only other characters are two Mormon boys. Every  character serves a purpose and they have their own roles in the overall story.

The Strangers is also one of the better examples of a horror film working without using gore. While there is a little bit, it’s not overdone. The small amount of gore is brutal and realistic. That being said, it’s still not the most disturbing aspect. As previously mentioned, it’s the mind games that not only affect the main characters but us as viewers. Where many horror films exploit the usage of sound cues as jump scares, The Strangers does it to perfection. Every time you hear a booming knock in the door, it does make you jump. Yet, it’s a sound that exists within the world of the movie and is used to also unsettle the characters. It never feels unnecessary or cheap as so many jump scares do. 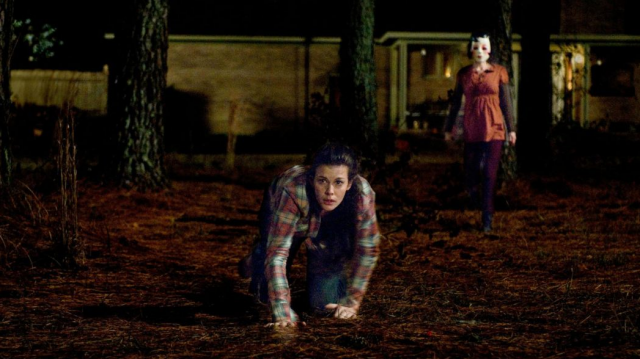 As is the case with many horror films, there are a few maddening moments. One of the biggest problems is that the characters of James and Kristen are kind of dumb at times. Kristen has a legitimate reason to believe they’re being stalked inside of their house. Yet, James completely shrugs it off after making a halfhearted search attempt. Even their escape attempts frequently result in them seeking refuge back inside the house. As usual, this review is spoiler-free but there’s one moment where they seemingly have a decent plan to limit their accessibility to their stalkers. Of course, in true horror fashion, they soon abandon it after James makes a grisly mistake.

Even though The Strangers isn’t overly original, it’s still a very satisfying horror experience. It’s refreshing because of how different it is from most of the ho-hum films that come out in the genre. The story is simple and realistic. It feels like an event that could legitimately happen to anyone. The villains aren’t supernatural killers or monsters that are indestructible. While it’s a bit polarizing among critics, The Strangers is an underrated, atmospheric, and eerie horror experience that excels because of its realism and voyeuristic feel.