Someone may need to check on Disney. It’s breathing but each breath is very shallow and there appears to be very little brain activity being monitored. Yes, the mass media conglomerate has seemingly been on top of the world in recent years. Massive acquisitions (i.e. Marvel Studios, LucasFilm, 21st Century Fox) and cash cows (i.e. Avengers, Star Wars) have quickly paid huge dividends for Disney. Yet, it still feels like the company has jumped the shark one too many times in the past two years or so. Highly anticipated films like Star Wars: The Last Jedi and Captain Marvel were met with mixed reactions after coming off of previous highs. Sure, Disney certainly isn’t lacking financially as Avengers: Endgame recently became the second highest grossing film of all time both domestically and worldwide. Even that film had its detractors though too. Additionally, Disney has been pumping out live action adaptations of their classic animated films. Earlier this year, Tim Burton’s Dumbo hit theaters to more mixed reviews. This past weekend saw more of the same as Disney’s messy live action version of Aladdin was released.

Of course, the film is an adaptation of one of Disney’s beloved 1992 animated film of the same name. The story is based on the Arabic folktale, also of the same name, from the One Thousand and One Nights collection of Middle Eastern folktales. Aladdin was the highest grossing film of 1992 and became the highest grossing animated film of all time before being beat out by The Lion King in 1994. It was also the first animated film to reach the half-billion dollar mark. The film spawned two direct-to-video sequels prior to this newest live action version. For the 2019 film, English filmmaker Guy Ritchie mans the director’s chair and co-writes the script along with John August. Ritchie is known for heist films like Lock, Stock and Two Smoking Barrels and Snatch along with both Sherlock Holmes films starring Robert Downey Jr. Most recently, Ritchie helmed 2017’s King Arthur: Legend of the Sword which received mixed reviews at best.

The 2019 film sees the titular Aladdin (Mena Massoud), a street urchin living on the streets of Agrabah with his pet monkey, Abu, rescue a young woman who steals bread to give to starving children. The woman explains that she’s the handmaiden to Agrabah’s Princess Jasmine (Naomi Scott) before Aladdin learns that she’s actually the princess in disguise. Aladdin and Jasmine quickly establish a connection but, due to his lack of royalty, the two cannot be together. Meanwhile, the Grand Vizier, Jafar (Marwan Kenzari), seeks someone to retrieve a magic lamp from the nearby Cave of Wonders to help him become the new Sultan. Jafar promises Aladdin great wealth to woo Jasmine in return for acquiring the lamp. Aladdin is betrayed by Jafar but keeps the lamp and releases the Genie (Will Smith) inside. The Genie allows Aladdin three wishes and also helps him win Jasmine’s affection.

For most people, the story should be pretty familiar. Again, 1992’s Aladdin is a favorite among Disney fans and was released during the renaissance period for the company. For the most part, the film doesn’t stray too far from its source material. It’s similar to 2017’s Beauty and the Beast in this regard with its iconic soundtrack, costuming, and characters mostly intact. However, the story feels oddly rushed most of the time. Given that the original is only 90 minutes while the live action version is 128, it’s strange to think that anything would be rushed. 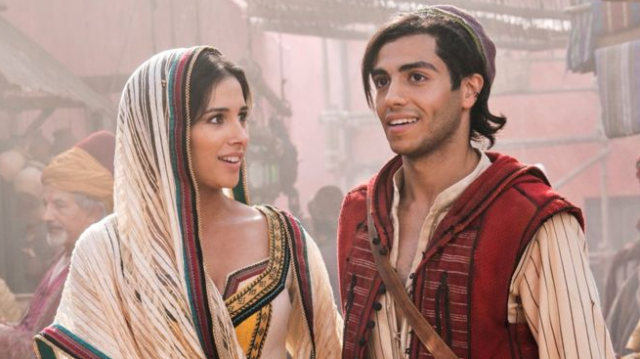 One thing that causes the film to frequently drag on is its extremely poor screenplay. Screenwriter John August has spent much time penning films like Big Fish, Charlie and the Chocolate Factory, and Frankenweenie for Tim Burton. His first collaboration with Guy Ritchie couldn’t have gone worse as Aladdin is filled with unfunny jokes, nonsensical plot points, and some of the blandest dialogue imaginable. There’s a long running joke in the film about jam that is never once funny. It’s not the least bit humorous when it’s first mentioned and it’s brought up multiple times throughout the film. It’s simply appalling that a film with so much hype and fan anticipation could be this poorly written and handled. Ritchie’s direction can be lumped in here as well since neither he nor August seemingly knew what made the original Aladdin any good. It certainly wasn’t a pathetically unfunny joke about jam.

The overall storytelling and continuity doesn’t do the film any favors either. There are so many instances of something happening and then being completely irrelevant literally one minute later. At one point, Jafar is arrested but, one minute later, he breaks out of his cell and it’s never mentioned again. Another example is a scene where Jafar’s parrot, Iago (Alan Tudyk), is unable to carry the weight of the Genie’s lamp and he falls towards the ground. Again, literally a minute later, Iago is flying with the lamp with absolutely no issue. Sadly, there are even more scenes like these. How did these things go unnoticed by a veteran filmmaker like Ritchie or even the studio? These kind of issues are day one filmmaking problems and there’s no excuse that this type of laziness should make it into potentially one of the biggest movies of the year. It’s true that some quick events from the animated film may not have translated well to live action. However, those are things that needed to be cut then. They shouldn’t have just been shoehorned and left in to make an inferior product.

The film’s acting is quite a mixed bag as well. Sadly, the two biggest roles provide the largest disappointment. In terms of “big roles,” we’re talking about the protagonist and antagonist. Mena Massoud’s Aladdin is so bland. Every once in a while, the tiniest amount of charisma leaks through but, for the most part, Massoud is a poor lead for this film. However, it’s not all his fault as that atrocious script often rears its ugly head and gives Massoud nothing to work with. Similarly, Marwan Kenzari’s Jafar is nothing compared to the original animated version. Not only does Kenzari not look the part, he’s not the least bit menacing or threatening. Kenzari is far too man-pretty for the role and never feels like a legitimate foe for Aladdin. 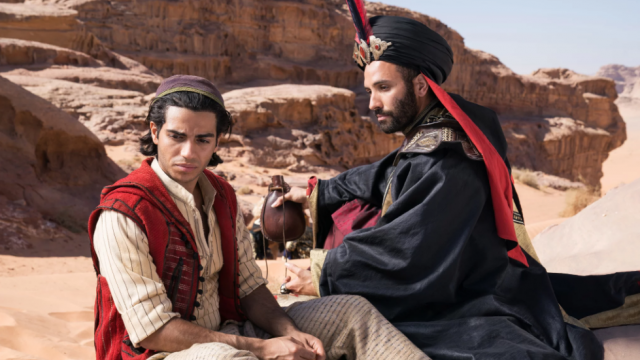 Unlike her male co-stars, Naomi Scott does a commendable job as Princess Jasmine. Her performance isn’t going to land her any awards or anything like that but Scott is likable in the role. Ritchie and company try to give her a bit of “girl power” attitude and it works enough without feeling overly cliched. It’s funny how everyone was worried about Will Smith’s Genie as he actually ended up being the best part of the entire film. No joke. He’s fine. Is he better than Robin Williams in the 1992 film? Not really. Yet, Smith took an iconic role and made it into his own thing. Will Smith is a charismatic guy in general and he brings that charisma and swagger to the role. When Smith’s Genie is onscreen, Aladdin is simply a better film.

It should be mentioned that Aladdin is a mostly faithful adaptation. Almost everything that happens in the animated film happens in some fashion here. Though, it just feels so uninspired. From the look of the early trailers, the 2019 Aladdin almost didn’t even look like a real movie. In some ways, it’s not. The film’s locations look like sets and its costumes look just like that: costumes. It’s an inferior stage play version of a classic title. Unlike a film like Dumbo, it doesn’t introduce anything new or different to the story. It’s just Aladdin but not as entertaining, memorable, or as well made. As soon as Disney struck gold with its adaptations of The Jungle Book and Beauty and the Beast, they were set on this path of remaking literally everything. With a few unimaginative and bland titles, they may be rethinking their stance. July 19th sees the release of their next adaptation with The Lion King so let’s hope that Disney learns that they’re not infallible before then.