In a day and age where action movies are packed to the gills with CGI and constant explosions, it’s refreshing to see something different. Films like the Transformers sequels, Power Rangers, and, most recently, Valerian, have cheapened the value of the action genre time and time again. Though, for every bomb there’s also a Mad Max: Fury Road or John Wick to instill faith back into audiences. While Charlize Theron’s new film, Atomic Blonde, may not be necessarily groundbreaking, it’s still a worthwhile experience despite some of its flaws.

The film is directed by David Leitch, uncredited co-director on the first John Wick and a stunt coordinator/stuntman since the late 1990’s. It’s actually an adaptation of the 2012 graphic novel, The Coldest City. Over the past few months, the trailers for Atomic Blonde showed many similarities to Leitch’s directorial debut in Wick. Both contain lethal, short-spoken heroes who fight off a small army of enemies. Their motivations are simple and effective with the action scenes being brutal and effective.

The film stars Theron as Lorraine Broughton, an MI6 agent being interrogated by her superior, Eric Grey (Toby Jones), and CIA agent Emmett Kurzfeld (John Goodman) about her mission in Berlin before the fall of the Berlin Wall in 1989. After the death of a fellow agent and her supposed lover, James Gasciogne (Sam Hargrave), Lorraine is tasked with recovering a specific List that holds the names of every Soviet Union field agent. She must also find and kill a double agent that goes by the codename, Satchel, who has been selling intelligence to the Soviets. Her lone contact is the erratic David Percival (James McAvoy) who is as much help as he is a hindrance during Lorraine’s time in Berlin.

First things first, the cast of Atomic Blonde is fantastic. There are no weak links whatsoever. Charlize Theron is totally believable as the beautiful, yet deadly, Lorraine. She uses seduction, intellect, and, when necessary, combat skills to obtain information. James McAvoy as Percival is, as always, fantastic. Although Percival is a somewhat sleazy character, McAvoy brings a swagger to him that also makes him extremely likable. Even minor characters like Spyglass (Eddie Marsan), a codenamed German Stasi officer, and French agent Delphine Lasalle (Sofia Boutella) are memorable in their brief screen time. 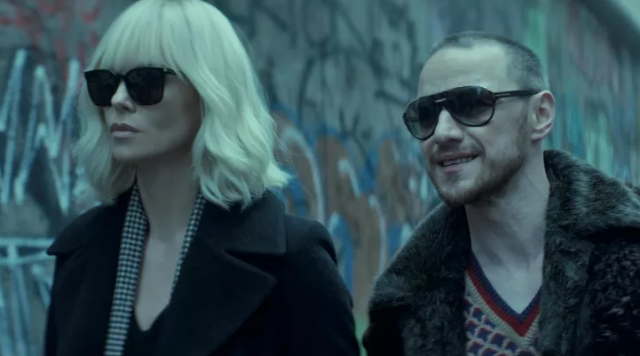 Another perk is that Atomic Blonde is also a beautiful film to look at. The stark Cold War-era Berlin is a perfect exterior backdrop for the story. Though, below the chilly blue hue is a visual smorgasbord hidden from the outside world. Many of the film’s interior scenes boast some of the best uses of color since Nicolas Winding Refn’s 2016 film, The Neon Demon. The scenes in Lorraine’s hotel room, the bar, and the nightclub are some of the standouts as they always feel like there’s so much to look at. The film also contains some stellar action sequences. In past reviews, we’ve complained numerous times about camera movement and choppy editing make so many action scenes unpleasant to watch. That’s not the case here. The smooth camera movements allow viewers to enjoy all of the choreography and stunt work without inducing nausea.

In addition to being visually stunning, it’s equally as good aurally. Though, viewers should be aware that this film gets loud at times. Between the impressive action and nonstop 80’s soundtrack, there aren’t many lengthy quiet moments. Speaking of the soundtrack, it’s unbelievable. While many of the songs are legitimate 80’s songs, there are also a number of 80’s covers to give the movie some flair. Classic tunes from artists like David Bowie, New Order, The Clash, and Public Enemy appear on the soundtrack. Even a song from industrial metal pioneers, Ministry, makes the soundtrack. However, it’s just a relatively faithful cover by Marilyn Manson (yuck). 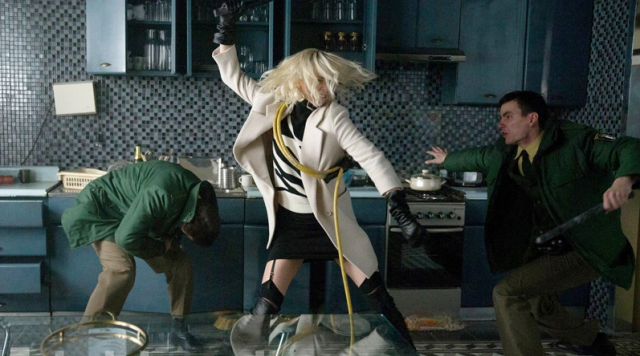 For as many good things there are to say about Atomic Blonde, the film has one fatal flaw: the storytelling. It’s pretty awful at times. Jumping back and forth between the interrogation room and the events happening in Berlin seems like it should be pretty straightforward but there are so many twists and turns along the way. The story gets so convoluted after a while that it’s sometimes hard to remember what the characters’ motivations are. The film editing plays a part in this too. There are some significant time jumps that are overly distracting. At one point, Lorraine is pursued by some nearby enemies and somehow escapes without much issue. Then the story jumps ahead to a different event altogether. Again, it’s just too convoluted and much more confusing than it truly should be.

Ultimately, Atomic Blonde is a good, but not great, action film. For those hoping for a female version of John Wick, you only get some of that. When the film is on the ball, it’s awesome. It just seems like the writers, David Leitch and Kurt Johnstad, may have simply overthought the plot and storytelling mechanics. If there is a sequel in the works, there’s certainly a lot to build off of though. Charlize Theron is great as the heroine and the rest of the cast is impressive as well. Atomic Blonde is by no means perfect but you can still have a lot of fun with it.