Marvel Studios, who we’ve talked about at length on this site many times, has been nothing but consistent. Every time a new film is released, you know what to expect. Of course, there are people who absolutely love everything that Marvel does no matter what but, more often than not, the comic book giant offers up an entertaining 2+ hour experience that doesn’t necessarily blow you away. Though, it’s hard to fit Avengers: Infinity War into that critique because it does blow you away and is, perhaps, the best film in the Marvel Cinematic Universe to date.

The first Avengers film was released in 2012 and it seemed like a total long shot for it to be any good. The idea of cramming four superheroes into one movie sounded like a terrible idea. On top of the four main characters, Iron Man (Robert Downey Jr.), Captain America (Chris Evans), Thor (Chris Hemsworth), and the Hulk (Mark Ruffalo), the film also included Black Widow (Scarlett Johansson), Nick Fury (Samuel L. Jackson), and Hawkeye (Jeremy Renner) into the group as well. Needless to say, The Avengers was a box office smash and set Marvel onto the trajectory they’re on today. A followup film, Avengers: Age of Ultron, was released in 2015 but, in hindsight, is a little less than stellar despite its box office numbers and positive reviews. Since then, the growing cast of heroes have trickled into standalone movies but, finally, everyone teams up in Infinity War.

Meanwhile, the Guardians of the Galaxy, Peter Quill/Star-Lord (Chris Pratt), Gamora (Zoe Saldana), Drax (Dave Bautista), Mantis (Pom Klementieff), Rocket (Bradley Cooper), and teenage Groot (Vin Diesel), come across Thor floating in space after following his ship’s distress call and rescue him. The group splits in half to double their efforts with Thor, Rocket, and Groot retrieving a weapon with the ability to kill Thanos and the rest of the Guardians go in search of the Reality Stone. 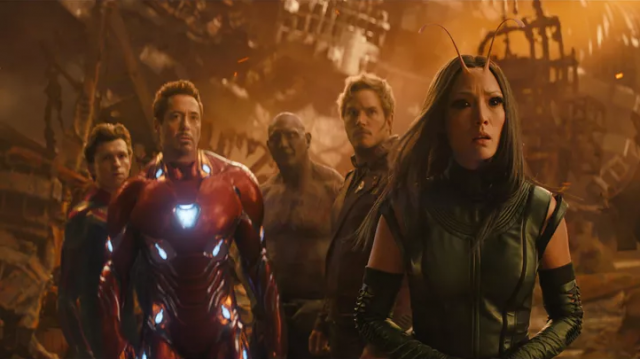 As you can see, the plot for Avengers: Infinity War is quite dense. Though, it’s not all that hard to follow either. All you really have to know is that all of the superheroes splinter off into their own teams to locate the infinity stones before Thanos is able to. Unfortunately for the vast collection of Avengers, they continuously fail at doing so while Thanos becomes increasingly powerful. If you’re coming into Infinity War blind without seeing most of the other Marvel films, you may be quite lost. This isn’t a film like Justice League where all of the characters seemingly get a glossed over backstory. Marvel has already established every one of these characters and you’re expected to see the previous films before this one.

Speaking of the characters, the cast for Avengers: Infinity War may be the largest ensemble cast in a big budget movie ever. It’s unbelievable how many current stars are not only in the MCU but in this one single film. There’s no doubt that this film is going to rake in truckloads of cash at the box office. It’s safe to wonder how much of that is needed to offset the actor salaries in Infinity War. Regardless, the price is well worth it as everyone is in top form here. With the massive cast of the film, it’s surprising that there isn’t a single weak link whatsoever. The plot has to move pretty quickly so some characters, like Black Panther (Chadwick Boseman), get less screen time than others. Yet, even more minor characters like Mantis and Wong get opportunities to shine. For how many people were in this film and for how much content they needed to get through, the filmmakers did a good job spotlighting everyone and giving them a role to play in the story.

That brings us to Thanos. The Marvel Cinematic Universe has been sorely lacking in suitable villains for their charismatic heroes. Though, in recent films, they’ve done a better job in this regard with Michael Keaton’s Vulture and Cate Blanchett’s Hela. With the initial tease of Thanos coming during the credits of the first Avengers film, the expectations of his arrival have been pretty lofty. Well, Marvel didn’t disappoint. Thanos is easily the best villain that the MCU has ever had. There will always be a soft spot in the hearts of fans for Tom Hiddleston’s Loki but Josh Brolin is excellent as Thanos. The Mad Titan knows who and what he is. He’s almost always calm and collected but has the power to destroy anything and everyone at will. What’s most surprising though is that they also succeed in humanizing him. While he is a villain, the filmmakers bring logic and understanding to his plan. You don’t want him to succeed but you don’t want him to entirely fail either. 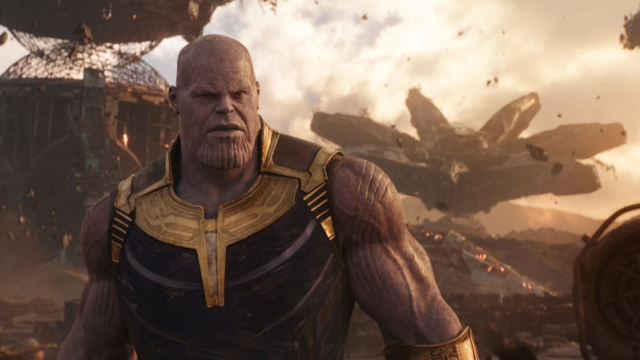 As most fans probably assumed, there’s also plenty of action to go around. Unlike last year’s War for the Planet of the Apes, another film with “war” in the title, Infinity War delivers on the word in a much more physical sense. There are constant battles between the different groups of Avengers and they’re all across the universe. There are battles in New York City, Wakanda, in space, and on the planet of Titan. Simply put, this film legitimately does feel like a war. In the past, we’ve been a bit critical on directors Anthony and Joe Russo for their action scenes. They love using quick and erratic cuts that make for a lot of jumpy action. While Infinity War isn’t devoid of this, they do scale it back a little. As opposed to something like Captain America: The Winter Soldier, you can actually see some of the action. If they’d scale it back just a tiny bit more, it’d be perfect. At least it’s a little less distracting here than in the past.

For all of the praise we’ve lumped on Avengers: Infinity War, it’s not a perfect film. However, it’s so ridiculously entertaining that its sins are completely forgiven. Ultimately, it’s everything that a Marvel movie should be and more. There’s actually a sense of urgency for the characters as their very existence is threatened by one being. It’s definitely the darkest film psychologically in the MCU as well. Marvel has finally hit a home run in terms of providing a villain and their greatest heroes legitimately feel challenged. As great as The Avengers, Guardians of the Galaxy and its sequel, Captain America: Civil War, and the original Iron Man were, Marvel has set a new gold standard for their superhero films. Avengers: Infinity War is unquestionably the best movie in the Marvel Cinematic Universe to date.