Well, it’s officially October so you know what that means. A chill is in the air and the leaves are falling from the trees as Halloween approaches. As has been the case over the past two years on this site, this is the month where horror reigns supreme. This year, we’re kicking things off with a new release. Gregory Plotkin’s second feature length film, Hell Fest, saw its release this weekend and perfectly encapsulates the Halloween season. For the most part…

To be frank, cinema has been without good slasher films for a long time. The height of the slasher sub-genre was back in the 1970’s and 1980’s with horror icons like Jason Voorhees, Freddy Krueger, and Michael Myers. There have been some bright points scattered here and there with characters like Candyman and Ghostface in the 1990’s. In the 21st century, we’ve mostly dealt with less than stellar remakes involving some of the aforementioned characters or copycat films like Cry Wolf and My Soul to Take. In the case of Hell Fest, it’s encouraging to see a film that attempts to be its own entity even if it still doesn’t feel fully original.

Hell Fest opens with a young Orange County woman getting separated from her group at the titular traveling horror themed amusement park. She is stalked and murdered by a masked killer known only as The Other. The plot picks up after these events and centers around a different group of friends as Natalie (Amy Forsyth) unexpectedly returns home to visit her former roommate, Brooke (Reign Edwards). Brooke and her new roommate, Taylor (Bex Taylor-Klaus), inform Natalie of their intention to attend Hell Fest in their city along with their respective boyfriends, Quinn (Christian James) and Asher (Matt Mercurio), and their friend, Gavin (Roby Attal), whom Natalie has a crush on. The group arrives at Hell Fest and proceeds through the park to the Deadlands, the scariest area of the park where the performers can touch the patrons, all while being stalked by The Other.

On paper, the plot is your typical slasher fare. In this regard, it draws inspiration from films like John Carpenter’s Halloween and Tobe Hooper’s The Funhouse. Viewers were terrified upon Halloween‘s release in 1978 because of its ambiguous nature. You don’t know why The Shape AKA Michael Myers is butchering babysitters. In the grand scheme of things, it’s not overly important either. It provokes a fear of the unknown as a faceless killer stalks his prey seemingly for the sport of it. This is the same case with The Other in Hell Fest. Of all of the people in the park, he latches onto these specific characters and he won’t stop until he kills them all. Too many films in this sub-genre try to get too cute (i.e. the Scream sequels) with motives and severely suffer for it. 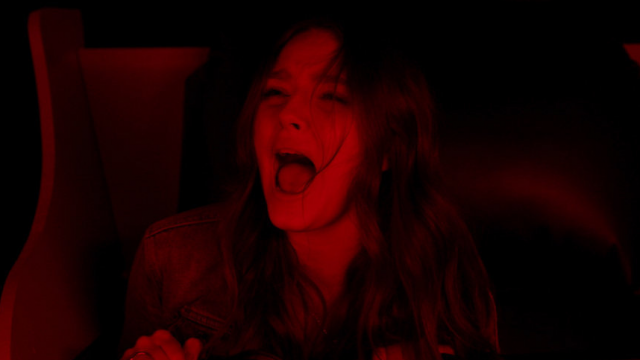 Now, that isn’t to say that the killer, or the other characters for that matter, are all that interesting. In terms of a slasher villain, The Other checks all of the boxes. He’s a nameless, masked, voiceless stalker who kills without reason. However, there’s nothing about him that really stands out other than a visible steel toed boot. This may be what the filmmakers were going for to simulate a real-life scenario. On film, though, a steel toed boot doesn’t make for the most interesting character trait. However, The Other does have some pretty cool kills on his resume by the film’s end. With the first kill following the film’s opening murder, you see where it’s going and hope that it follows through on what you’re anticipating. Needless to say, it does.

In terms of the film’s cannon fodder, they have their ups and downs. Like Hell Fest’s antagonist, none of the characters are all that interesting. There are even times where characters get kind of annoying based on their actions. Early on, Brooke is a bit obnoxious upon Natalie’s arrival but does calm down later on. Taylor, on the other hand, is full speed all the time. She’s the unapologetic horror/Halloween fanatic of the group. While us horror fans can relate to her excitement, it’s too much at times. Surprisingly, though, the characters aren’t always annoying. The issue with the uneven characters could be the fact that the film contains five writing credits. Two writers are credited with the story and three with the screenplay. This is a bit excessive for a simple slasher film and could definitely be the issue. 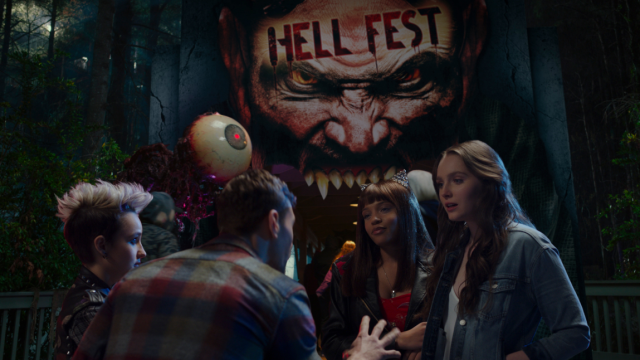 For fans of all things horror, one thing that will grab your attention is the park itself. It brings to mind events like Fright Fest at Six Flags and Halloween Horror Nights at Universal Studios. The mazes and attractions that the characters go through aren’t too memorable, most likely due to budget constraints, but they do leave you somewhat envious. The idea of Hell Fest is awesome and, for horror and Halloween enthusiasts, it makes you wish there was something of that nature in your own town. Even Tony Todd (yes, Candyman himself) makes a brief appearance as a barker at a guillotine attraction. In hindsight, the film could’ve used more Tony Todd. Hell, every film could use more Tony Todd.

For as up and down the plot and characters can be, none of these things are especially damning of the film itself. Perhaps the best thing about Hell Fest is in the fact that it knows what it’s trying to be. From the film’s trailers leading up to its release, it looked like your typical slasher movie. That’s exactly what it is. Nothing more, nothing less. The characters are likable enough to keep you invested in their survival and/or demise. The Other isn’t on par with any of the slasher heavyweights but the mystery surrounding him is, again, just enough to keep you on board. Some have criticized the film for being what it is. If you go into it expecting a reasonably fun time at the movies, you shouldn’t be disappointed. Yes, it’s mindless and lacks the gore factor that’s been exploited by films like the Saw franchise. However, if you’re a fan of horror and the Halloween season in general, Hell Fest is a satisfying slasher film.