There are two types of people in this world. Those who “get” Wes Anderson and those who don’t. As fans of filmmaking, it’s much more beneficial to be in the former category. There’s something about Anderson’s style, humor, and simple storytelling that’s just so endearing. With films like Rushmore, The Royal Tenenbaums, The Life Aquatic with Steve Zissou (which is actually a little overrated) being early quality entries on his resume, it’s hard to believe that the writer/director has remained so consistent over the course of his career. Over the past decade, titles like Fantastic Mr. Fox, Moonrise Kingdom, and The Grand Budapest Hotel have kept him at the top of his game. Anderson’s newest effort, Isle of Dogs, is no exception.

The film isn’t Wes Anderson’s first foray into the world of stop-motion animation. The aforementioned Fantastic Mr. Fox is a wonderful adaptation of Roald Dahl’s novel with an amazing ensemble cast. Needless to say, if you were a fan of Fox‘s style and execution, then you should be right at home with Isle of Dogs. It features many of the same anthropomorphic character traits, quirky, yet appealing, animation, and a massive voice cast that charms every step of the way.

The plot centers around a young, orphaned, Japanese boy, Atari Kobayashi (Koyu Rankin), in a dystopian near-future. Mayor Kobayashi of Megasaki City, and Atari’s legal guardian, exiles all dogs to Trash Island due to a dog flu virus. Atari’s dog, Spots (Liev Schreiber), is the first to be banished to the island. Atari pilots a plane and flies to Trash Island to search for his missing pet. There, he meets a pack of dogs, including Rex (Edward Norton), King (Bob Balaban), Boss (Bill Murray), and Duke (Jeff Goldblum), who befriend him and agree to help him locate Spots. Though, the quasi-leader of the pack, Chief (Bryan Cranston), is a former stray and reluctant to help a human.

Like Fantastic Mr. Fox, the first thing that sticks out is the voice cast. Just look at those names above. Of the five main dogs, Bryan Cranston and Edward Norton steal the show although they all have their moments. Frequent Wes Anderson collaborator, Bill Murray, is always a welcome inclusion and brings his quirky delivery to the role of Boss. In addition to the main characters, there are still a ton of excellent actors who make appearances. Scarlett Johansson, F. Murray Abraham, Harvey Keitel, and Tilda Swinton voice some of the other dogs in the film. Then, you have Greta Gerwig as a stereotypical American tourist, Frances McDormand as an English interpreter, and even Yoko Ono lending her voice as an assistant scientist. That’s not to mention the Japanese voice talent, including Ken Watanabe, that makes up a good chunk of the cast. 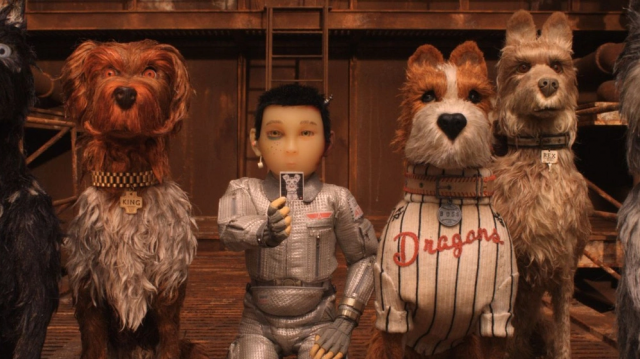 The aesthetics and animation style, again, are extremely appealing. There’s something about stop-motion animation that you just don’t get from the usual computer generated Pixar/Dreamworks fare these days. Of course, there’s nothing against those types of films as they often put out quality work. Isle of Dogs is just a step above. Every character is memorable in terms of their appearance. Each dog has their own unique look and there’s never any confusion over which dog is which. Even by the end when there are two dogs who differ in only one distinct trait, it’s easy to avoid confusion over them. In addition, every frame of this film is a work of art. This is nothing new for a Wes Anderson film as his films are always aesthetically pleasing. It’s shocking how much attention to detail is paid and it truly sets Anderson apart as a filmmaker in general.

The dry oddball humor is as prevalent as ever in Isle of Dogs. For fans, it’s exactly what you’d expect. One of the funniest things in the film is the constant appearance of cats. They’re essentially god-like creatures in Megasaki City. You often forget about them as the dogs are the primary focus. Then, the story cuts back to the city and the human characters will be holding cats or cats will adorn their clothing or backgrounds. Even the televisions display images of cats. It’s an amusing recurring gag that is classic Wes Anderson. On top of that, seeing the talking dogs doing dog-like things is always worth a chuckle. The same type of humor was used in Fantastic Mr. Fox and it works just as well here. One notable scene involves the main pack of dogs discussing whether to fight another pack over a bag of garbage. Great stuff. 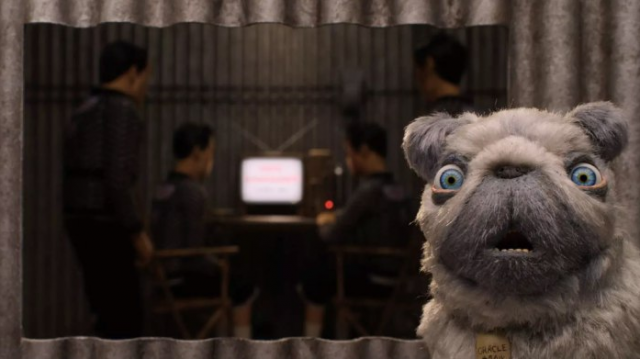 One thing that people should know going into this film is that there’s a good portion of it in Japanese. Though, the film cleverly handles the language barrier with subtitles and interpreters. It’s not so much that it would be unwatchable for people not interested in foreign film but it may be a turn off to casual moviegoers. Surprisingly, or maybe not given the day and age we live in, Isle of Dogs has received some slight backlash due to its handling of Japanese culture. It has been criticized for some racial stereotyping, cultural appropriation, and tourism cliches. While there are certainly some of these things in the film, they appear to be very intentional. This film, like all of Wes Anderson’s work, is not meant to be taken seriously. The dry, subtle humor is a staple of his work and, again, intentional. Don’t think too much about it.

It’s no surprise that Isle of Dogs is another home run for Wes Anderson. While some people may think The Royal Tenenbaums or The Life Aquatic represent his best work, you could argue that his newer films are just as good if not better. We’ve compared Isle of Dogs frequently to Fantastic Mr. Fox throughout this review and that’s its lone setback. It’s definitely not the same as Fox, but it’s just not quite as good. That being said, it’s still an outstanding experience. If you’re a fan of Wes Anderson, it’s simply impossible to dislike Isle of Dogs.