As we’ve discussed a handful of times before, Disney has been nearly unstoppable as of late. Between their massive company acquisitions and their stellar box office performances, they’re on top of the world. One of their flagship franchises, though, has not been as hot. Pirates of the Caribbean has been unable to find its way since the universally acclaimed debut, The Curse of the Black Pearl. My, how the mighty have fallen. This past weekend, the fifth film in the franchise, Dead Men Tell No Tales hit theaters. To say the least, it’s not good. It’s really not good.

After the somewhat open ending of the acceptable last film, On Stranger Tides, the series could’ve went in a number of directions. Angelica (Penelope Cruz) was left on an island by Captain Jack Sparrow (Johnny Depp), Captain Barbossa (Geoffrey Rush) reclaimed his place as a pirate, and Philip (Sam Claflin) and the mermaid, Syrena (Astrid Bergès-Frisbey) fled their captors together. Obviously, Dead Men Tell No Tales wrapped up all those plot points, right? Well, no. It didn’t address any of them actually.

The new film instead tells an entirely new story as new villain, Captain Salazar (Javier Bardem) searches for Jack Sparrow. Salazar is a pirate hunter who’s cursed following an unfortunate trip to the Bermuda Triangle with his crew. Meanwhile, Will Turner’s (Orlando Bloom) son, Henry (Brenton Thwaites) is also looking for Sparrow in an attempt to free his father from his oath of service on The Flying Dutchman. In addition, Kaya Scodelario plays Carina, a brilliant woman with a mysterious past who’s searching for answers of her own. Barbossa also returns as Salazar uses him to find Sparrow. For some reason, all of the characters need the hidden trident of Poseidon to accomplish their goals. Whoever holds the trident commands the sea.

The main problem with Dead Men Tell No Tales is in its story. None of these things really add up to anything all that exciting. While the search for the trident is the ultimate goal, you often forget about it. There’s no story surrounding it as there was with the Fountain of Youth or the Dead Man’s Chest as in the previous films. It’s just a random object to propel the plot with the ability to undo previous plotlines. It’s hard to care about the story when it doesn’t seem all that important to the characters to begin with. 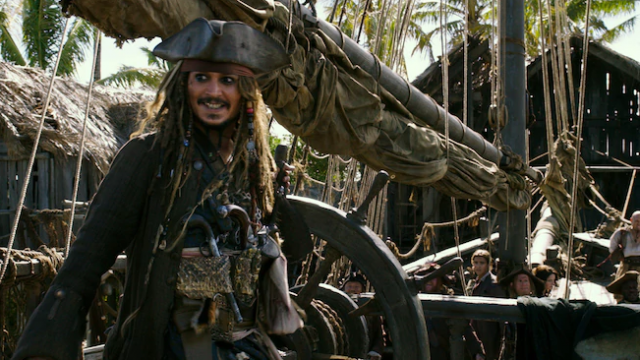 This continues with the characters as well. While Johnny Depp held the series together with his four previous adventures as Jack Sparrow, he really phoned it in this time around. He’s a shadow of his former self as he’s not charming, funny, or clever. He’s a caricature of himself at this point. The opening scene with him is humorous for a brief moment until he acts like a total buffoon for the rest of the film. It’s hard to think of any noteworthy scenes in which he stands out from his peers as a true star.

As for the new characters, Javier Bardem is the only one that sticks out. Salazar has an interesting backstory and a history with Sparrow. His sinister look and actions work for the most part but he’s never really given a lot of time to shine. The best scene with him is his introduction which was basically the first teaser trailer released for the film. Henry Turner and Carina Smyth, on the other hand, are throwaway characters at best. They’re a big part of the story but their chemistry between one another and with the rest of the cast is nonexistent. Henry doesn’t bring the same flair to his relationship with Jack Sparrow that Orlando Bloom brought with Will Turner.

With these last two films, Disney has tried to introduce characters that could step in to the roles left behind by Will and Elizabeth Swann. Both times, they’ve failed miserably with hackneyed love stories between wooden characters. They did actually bring back Will Turner for Dead Men Tell No Tales. Though, he’s barely in the film. With a good chunk of the plot dedicated to his son trying to save him, it’s incomprehensible that he wasn’t more involved in the film’s events. That movie would’ve been worth actually seeing. Instead, we were given the most tedious events and characters to follow for a predictable payoff. 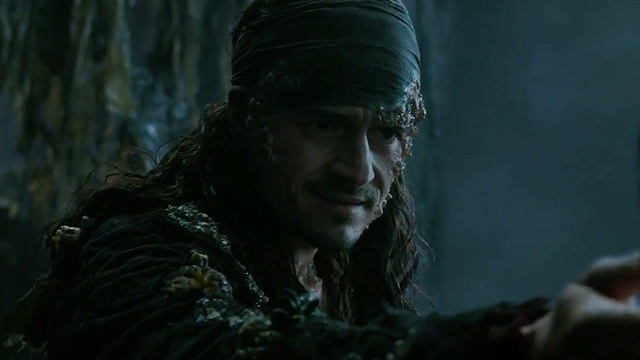 The other thing that’s shocking about Dead Men Tell No Tales is its length. It’s the shortest of the series yet feels ridiculously long. The problem is that there really isn’t all the much happening. There’s so much buildup that it seems like this is just the first part of a new string of films. It felt a lot like Dead Man’s Chest in that respect except that Dead Man’s Chest is actually entertaining to watch. You continuously wait for the climax to start ramping up but it never seems to come. When the film does finally get to it, the climax is admittedly better than anything that happened previously. Still, it’s too little, too late to save the movie.

Pirates of the Caribbean: Dead Men Tell No Tales simply misses the mark. It’s not fun, it’s not entertaining, and it doesn’t even give us more of the same. Even the clever humor has become unfunny slapstick at this point. It’s a halfhearted attempt at reminding people of the series. There are two somewhat emotional moments in the film that provide a brief glimmer of what the Pirates films once were. It just isn’t enough though. While all of the films that followed the original have received mixed reviews, all three sequels were far superior to this one. At the very least, they felt like logical extensions to the franchise. Dead Men Tell No Tales tries to reinvigorate interest in Pirates of the Caribbean but it’s becoming obvious that this is a series that has completely lost its way.