Imagine being a child in the early to mid 1990’s. So many classic television shows featuring some of the most legendary heroes were going strong at the time. Teenage Mutant Ninja Turtles, Batman: The Animated Series, and X-Men are total staples of the time period. Then along comes a live action television show that mashes together elements of superheroes, martial arts, and Godzilla. Here, you have Mighty Morphin Power Rangers. The show was a cultural phenomenon between 1993 and 1996 and was merchandised up the wazoo. Toys, clothing, video games, and more stemmed from the popularity of the show. Somehow, in 2017, Power Rangers lives on with a brand new theatrical film.

Produced by Saban Entertainment, Mighty Morphin Power Rangers took most of its footage from a Japanese series called Super Sentai. The show used this footage for most of its fight scenes while an American cast filmed the rest of the show. The superhero team went through many changes over the years as different variations of the rangers were introduced. Following the Mighty Morphin days, there have been continuations of the show such as Turbo, Dino Thunder, Mystic Force, and, most recently, Ninja Steel. Though, none of these will ever touch the popularity of the original show. This isn’t the first time that the team has hit the big screen either. There have been two films based on the series released before the 2017 version. Though, neither had the budget nor the box office return that this new film is destined to have.

The film opens with the Power Rangers on prehistoric Earth. The Red Ranger, Zordon (Bryan Cranston), seeks to hide each of the Power Coins belonging to his team from the Green Ranger, Rita Repulsa (Elizabeth Banks), who betrays them to take the Zeo Crystal for herself . Zordon orders his robot assistant, Alpha 5 (Bill Hader), to send a meteor strike that kills Zordon and sends Rita to the bottom of the ocean. Back in the modern day, five high school outcasts in Angel Grove have an unlikely meeting at a mine. Here, they find the Power Coins and each develop superhero abilities. They are told of the history of the Power Rangers by Zordon whose spirit inhabits a moving wall. They begin to train as Rita returns and begins to collect as much gold as possible to create her minion, Goldar.

From that description, you may be thinking, “What does any of that even mean?” Luckily for the film, you don’t really need to understand any of it to follow the plot. The Zeo Crystal’s purpose is somewhat shaky, Zordon’s spirit inhabiting a wall is something you’ll just have to accept, and Goldar is a giant creature made out of gold. For anyone that has seen the TV show, you’ll be right at home with the storyline. It’s basically a bloated two hour episode. For those not familiar with the show, it’s a simple story of good versus evil and it shouldn’t be hard to understand whose side you should be on. 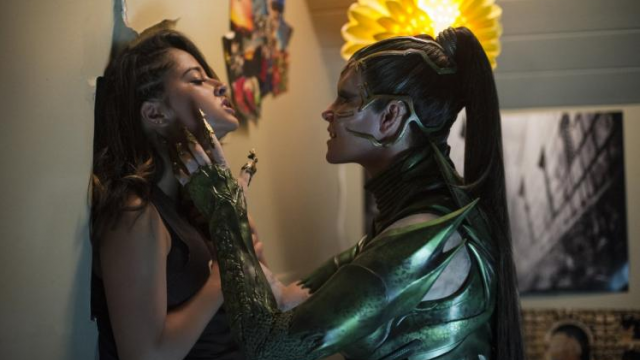 Let’s get something out of the way. Power Rangers is not a good film and we’ll get to that. Though, the characters are actually not that bad. The five Rangers have their own personalities and traits which is definitely a good thing. In the film, they need to bond with one another before they’re able to morph into their armor. Jason (Dacre Montgomery), Kimberly (Naomi Scott), Billy (RJ Cyler), Zack (Ludi Lin), and Trini (Becky G) are all relatively likable and there’s a legitimate chemistry between the actors. Sure, they can be a bit dopey at times but the script doesn’t do them many favors.

Elizabeth Banks as Rita Repulsa is the highlight. She definitely looks the part and feels like a formidable threat to the Rangers. This is a welcome change from the show as Rita and her minions are often buffoons. While the Rangers and Rita are done quite well, unfortunately, Zordon and Alpha 5 are not. They are simply in the film to explain the plot. Every time either one is onscreen, they’re spewing incessant exposition to the other characters and to the audience. It’s definitely a waste of the name actors they cast in the roles.

While the filmmakers did relatively well in building their characters. They failed miserably in the other major aspect of the show: the action. For starters, there barely is any. The Rangers spend the majority of the film outside of their armor in training. Then, when they finally morph, they have one brief battle with Rita’s army of Putties before getting into their Zords (mobile robots modeled after prehistoric animals). Then, they don’t even have their face shields down for the battle with Goldar. It’s bizarre that the filmmakers spent all this time building up to an epic battle with halfhearted execution. 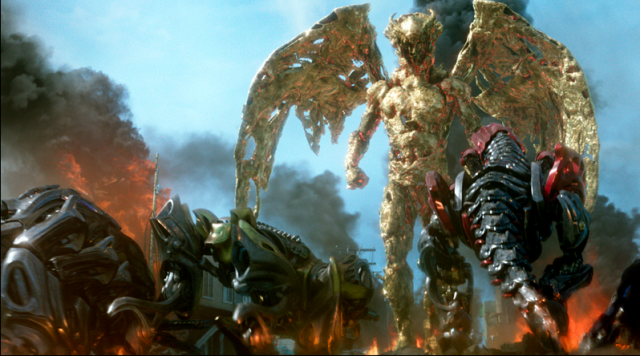 Of course, the final confrontation with Goldar needs to be mentioned as well. At this point of the film, you may as well be watching any mindless action film. The Zords are unrecognizable compared to their Mighty Morphin counterparts. They seriously look like they belong in a Michael Bay Transformers movie. Even the inclusion of the Power Rangers theme song can’t make the final CGI-ridden battle appealing. On top of everything, Goldar has the scorched earth of Mordor where a face should be for some reason. Maybe the filmmakers didn’t know what to do for a final villain and threw him in last minute. Either way, though, they could’ve given him some kind of facial feature instead of nothingness.

Ultimately, Power Rangers was a disappointment. There were too many times the film didn’t know who they wanted for an audience. You’d think they’d either aim for kids or adults who grew up watching the original show. There’s some cheesy bullying and horseplay from the characters which makes it seem juvenile. Then, the next thing you know, you have the characters dropping curse words. It’s kind of bizarre that we’re seeing this film in 2017. Had it been made ten years ago around the time of the first Transformers, it may have been passable. What’s even crazier is that there are supposed to be multiple sequels in the works. At this point, though, we’ve seen everything that Power Rangers has to offer and we’ve seen it done much better. While Power Rangers isn’t the worst film you’ll probably see this year, it’s not very memorable either.