When Disney acquired Lucasfilm back in 2012, the world buzzed with anticipation over what would be done with the Star Wars franchise. Three years later, Star Wars: The Force Awakens was released to universal acclaim from critics and fans alike. Now, only one year later, a new installment to the series has hit theaters in Rogue One: A Star Wars Story.

Rogue One is a different type of Star Wars. It’s not one of the “episodes” of the George Lucas era and it’s not part of the sequel trilogy that started with The Force Awakens. Instead, it’s a part of Disney’s plans for standalone films set in the same universe. You can expect these individuals to be peppered in between the sequels to the original saga every other year through at least 2020 according to Disney’s current plans. That being said, Rogue One is an excellent way for Disney to kick off their anthology series. It has a ton of Easter eggs and a lot of things to love for Star Wars fans of all ages.

The plot follows Jyn Erso (Felicity Jones), the daughter of scientist, Galen Erso (Mads Mikkelsen), who escapes following the capture of her father by Imperial military officer, Orson Krennic (Ben Mendelsohn). She is led to safety by Saw Gerrera (like Che Guevara… we see what you did there, Star Wars), who’s played by Forest Whitaker. From there, Jyn unites with the rebel alliance in efforts to steal the plans to the Death Star being built by the Empire.

For starters, let’s talk about the cast. It is beyond solid from top to bottom. Felicity Jones is likable as the heroine, Jyn. Her main companions are rebel supporter, Cassian Andor (Diego Luna), blind believer of the Force, Chirrut Îmwe (Donnie Yen), assassin, Baze Malbus (Wen Jiang), and reprogrammed Imperial droid, K-2SO (Alan Tudyk). As you’d expect from an uprising, the group is a ragtag of people with a common goal. Of the group, Îmwe and K-2SO are the two standouts. Îmwe has a few awesome scenes in which you’ll see him dominate stormtroopers and use his faith in the Force to achieve his goals. K-2SO is the lone comic aspect of the film and he has a number of properly timed one liners of dialogue. 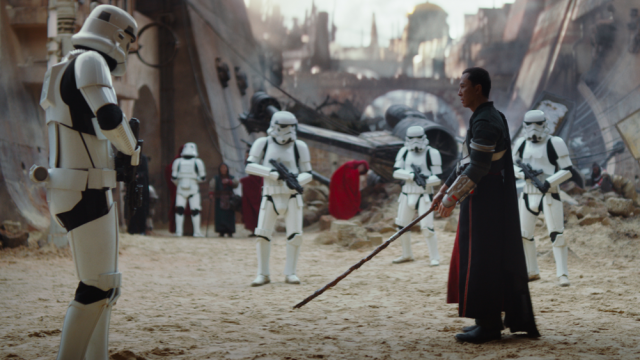 As previously stated, this is a different type of Star Wars film yet it feels like a necessary entry to the franchise. The events that take place were the catalyst for the events in the original Star Wars from 1977. Seeing them in the flesh, so to speak, seems to bring more of a meaning to them. Stealing the plans was an important moment for the rebels that required motivation, sacrifice, and some luck. There’s a legitimate emotional weight to the actions of the participating characters.

Of course, with Star Wars, one must always mention the special effects. They are phenomenal in Rogue One. With Disney’s interpretation of the universe, gone are George Lucas’s cartoony CGI cities and characters. Disney has taken the classic approach that the original trilogy took with real locations and practical effects. Though, that’s not to say that there’s no CGI in the film. In fact, one of the most impressive uses in all of cinema occurs in Rogue One.

Usually, these reviews are kept spoiler free but this is only a minor one that doesn’t revolve around plot. CGI was used to recreate Peter Cushing’s likeness to include Grand Moff Tarkin in the film. Tarkin was a focal point of the original Star Wars. Cushing unfortunately passed away in 1994 at the age of 81. Industrial Light and Magic created Cushing’s likeness while using a stand-in actor to perform the role and a voice actor to imitate his voice. On top of that, Tarkin isn’t only in a scene or two, he’s an integral piece of the plot. If you were unaware that the real actor was deceased, you’d be unlikely to notice that he was created via CGI. There’s another scene that uses the same technique but won’t be addressed here. 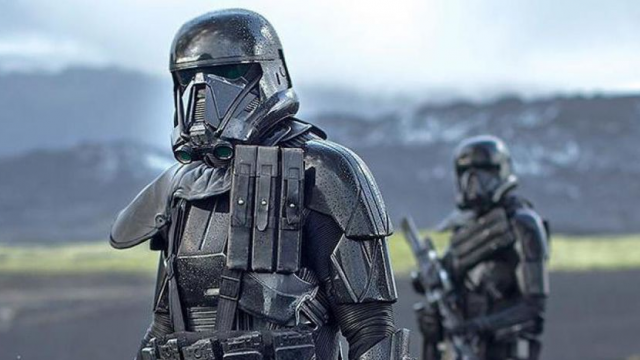 As with any film, Rogue One is also not perfect. As great as it is to see Star Wars on the big screen again, it has a few missteps. The beginning of the film meanders for the first hour or so before kicking into high gear. It’s not horrible but you also get a little bit lost as it jumps from person to person. The worst thing about it is the characters. As mentioned before, the cast is excellent. It’s just that the characters aren’t quite as memorable as the original films. While that may not be a knock due to the ridiculously legendary status of characters like Luke Skywalker, Princess Leia, and Han Solo, it’s still a slight detractor to the Star Wars universe in general.

Overall, Rogue One: A Star Wars Story is a great experience. The plot is rock solid, the action is great, and it adds another piece to the massive Star Wars puzzle. It’s also great to see characters like Tarkin and, especially, Darth Vader back in action. Vader, once again voiced by James Earl Jones, plays a somewhat short role in the film but has one of the best scenes as well. Regardless of what anyone says, the name in the title is Star Wars. Star Wars is an event and this one’s no different. If you’re a fan of the series, Rogue One should be essential. It’s not quite as good as last year’s The Force Awakens and it may not have the charm of A New Hope or The Empire Strikes Back but it’s still one of the most entertaining movies of the year.