Even in 2020, it’s crazy to think that we still don’t have a high quality film adaptation of a video game. Titles like Netflix’s Castlevania and The Witcher appear to be a step in the right direction for video game properties on television but there continues to be a disconnect on the big screen. Things started out quite rocky back in 1993 with the extremely misguided Super Mario Bros. but, by now, you’d think that filmmakers and studios would’ve figured something out. Films like Assassin’s Creed, Tomb Raider, and Pokémon Detective Pikachu were decent enough but still have been unable to wow new audiences and appease gamers alike. Unfortunately, that trend continues with the mildly entertaining but mostly dull adaptation of Sonic the Hedgehog.

Most people will remember Sonic the Hedgehog from his days as the Sega video game company’s mascot. In 1990, it was decided that Sega needed a new recognizable character to combat Nintendo’s Mario. Created by programmer Yuji Naka and artist Naoto Ohshima, the first Sonic the Hedgehog game hit the Sega Genesis console in 1991. The game helped put Sega on the map with its touted faster gameplay, killer soundtrack, and its perceived cooler character than Nintendo’s Mario. Countless games have been released over the years including a followup in 1992 which became the second highest selling Genesis game of all time behind only the original. In addition to the video game franchise, there have been cartoon television shows, comic books, and all types of physical merchandise based on the character. Of course, the most recent efforts to re-establish the character as a media icon comes in the form of his long awaited feature film debut.

Sonic the Hedgehog opens with Sonic (voiced by Ben Schwartz), an extraterrestrial blue hedgehog, running at blazing fast speeds across his home island. He disregards his caretaker, Longclaw the Owl’s (voiced by Donna Jay Fulks), requests for him to hide his special abilities. Because of this, Sonic attracts the attention of the native echidna tribe and Longclaw instructs Sonic to use a magical ring to seek safety on Earth. Ten years later, Sonic lives in solitude in Green Hills, Montana. Though, he longs to make friends. Upset by this, he unintentionally emits an electromagnetic pulse that knocks out power in Green Hills and attracts the attention of Dr. Ivo Robotnik AKA Eggman (Jim Carrey). With Robotnik on his tail, Sonic loses his bag of rings through his own portal to San Francisco. From here, he seeks help from sheriff Tom Wachowski (James Marsden), who Sonic idolizes from afar, to get him to San Francisco and out of the reach of Dr. Robotnik. 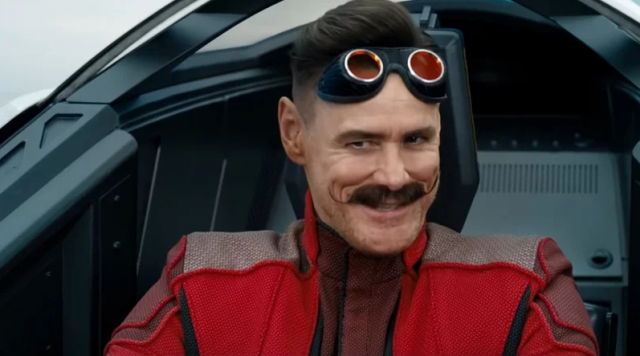 When it comes to plot, what did anyone really expect out of a live action Sonic the Hedgehog movie? On the surface, it hits enough of the right notes with Sonic battling the evil Dr. Robotnik. Yet, he really doesn’t do a whole lot of battling. Much of the film follows Tom and Sonic’s shenanigans while essentially running away from Robotnik. One of the problems here is that it’s hard to say if this film really needed to be live action. It feels as if maybe screenwriters Patrick Casey and Josh Miller kind of wrote themselves into a corner by including so many human characters. After all, the classic Sonic games usually only featured one human character in Dr. Robotnik. Yeah, some of the later ones made questionable decisions in regards to characters but we’ll disregard those. Too much of the plot starts to revolve around the humanity of an inhuman character. This is something we’ve seen countless times before in much better films such as Terminator 2: Judgment Day.

As previously stated though, what was to be expected from a Sonic film? Obviously, this wasn’t meant to be high art. So, what does the film get right? It does seem to capture some of the look and feel of the video games. There are little Easter eggs here and there that pay homage to the games like the town of Green Hills, Montana, being named after introductory Green Hill Zone stage from the Genesis games. There’s even some remixed original game music in the film even if there’s not quite enough of it. Ultimately, the Sonic the Hedgehog is at its best when it’s being just that: Sonic. Seeing everyone’s favorite blue hedgehog running at high speeds, tucking into a ball, and smashing into things gives you a nostalgic thrill and will have you wanting to play the Genesis classics. It also helps immensely that the filmmakers took fan criticism to heart after the first trailer debut where Sonic’s uncanny valley creep factor disappointed fans. The new version of Sonic is much closer to the games and was the right way to go overall. 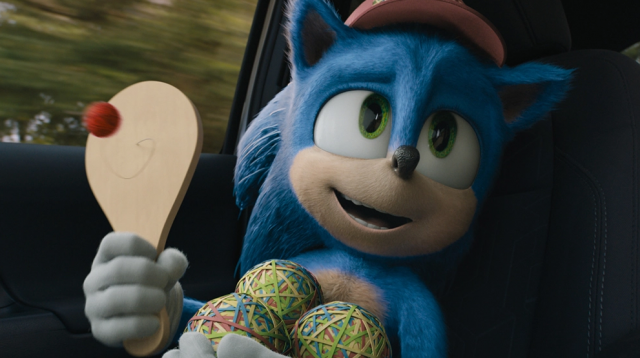 However, there’s still a major problem with the character of Sonic. He’s so unlikable. While Sonic was supposed to the cool and hip alternative to Mario, this ADHD little kid portrayal of the character is insufferable at times. He’s constantly firing on all cylinders with cheesy one liners and gags that are rarely funny. There’s some heart to the character when he’s not being annoying which is one of the only things that save the film but, for the most part, this doesn’t seem like the Sonic that anyone was asking for. On another note, James Marsden is actually pretty good despite being your standard cliched good guy police officer. Jim Carrey is alright as Dr. Robotnik but he mainly relies on the old Jim Carrey schtick. His portrayal is reminiscent of his past performances as characters like The Riddler or Ace Ventura. Basically, it’s something we’ve all seen before from him.

Even though Sonic the Hedgehog isn’t a bad film, it just seems largely uninspired and much too far past the point. Had this film come out in 2000, it may be looked at in a more positive light. The writing from Casey and Miller is just plain bad in a lot of spots and it’s hard to determine who the audience for this film is. There are stretches of boredom that would seem to turn off younger children but everything is so juvenile that it’s hard to consider the film as a product for older, long term fans either. It feels as if opinions are going to vary for Sonic the Hedgehog and that’s probably fair. Some people are probably going to love it for the nostalgia and its moments of fun. Others will be disgusted by the poor writing, lack of popular characters like Tails (kind of) and Knuckles, and the overall portrayal of Sonic. At this point, it’s about what you’d expect from a video game movie and, sadly, that continues to be mediocrity even here in 2020.