It’s finally here. After the wonderful resurrection of the Star Wars franchise in The Force Awakens to the dreary depths of mediocrity that was The Last Jedi, the supposed final installment of the Skywalker saga has hit theaters. Upon its release, Star Wars: The Rise of Skywalker has been met with polarizing reviews from critics and fans alike with some going so far as to completely lambaste the film. In all fairness, the Star Wars franchise isn’t exactly new to this type of criticism. Yet, Disney’s handling of the billion dollar cash cow hasn’t exactly played out like die-hard fans have wanted it to. So, is The Rise of Skywalker good or bad? Well, that’s going to be left up to interpretation but, by the end of this review, you may be surprised.

In 2015, fans got to return to a galaxy far, far away for an adventure with new characters and a heavy dosage of nostalgia in The Force Awakens. Unfortunately though, the film was followed by the horribly misguided Rian Johnson trainwreck, The Last Jedi. Johnson toyed with the lore of Star Wars and introduced many storylines, ideas, and characters that are hated by fans today. Originally, the third film in the sequel trilogy was to be directed by Jurassic World’s Colin Trevorrow. However, the director backed out and Abrams returned to get the conclusion of the Skywalker saga back on track after the Rian Johnson debacle.

Since there hasn’t been much announced about the film’s story, we’ll keep the plot section quite brief. The sequel trilogy’s triumvirate of newly trained Jedi, Rey (Daisy Ridley), former stormtrooper, Finn (John Boyega), and Resistance pilot, Poe Dameron (Oscar Isaac), finally unite to lead the Resistance into a climactic battle against Kylo Ren (Adam Driver) and the villainous First Order. Rey, Finn, and Poe are not alone as they team with past heroes such as General Leia Organa (Carrie Fisher), Chewbacca (Joonas Suotamo), and C-3PO (Anthony Daniels) in their quest. However, Kylo Ren has support of his own in the form of the evil Emperor Palpatine (Ian McDiarmid) who’s back from the dead.

Much of the film has a “go here, do this” kind of a feel. The characters go somewhere to retrieve a McGuffin to further enhance the plot and then move on to the next place for another McGuffin. Additionally, it often feels like the The Rise of Skywalker has the unenviable task of performing damage control for this trilogy. While The Force Awakens was a great starting point for these new characters, The Last Jedi felt like it was going in a completely different direction. With the return of J.J. Abrams, this new film mostly does a good job doing away with some of the stupid ideas that Rian Johnson brought to the franchise. Abrams essentially retcons a lot of the events from the previous film and brings back the fun from his first go-round.

One of his most noteworthy achievements is getting this batch of characters back on track. The three main heroes, Rey, Finn, and Poe, were extremely likable in The Force Awakens but were all kept apart in The Last Jedi. Instead, Johnson opted for questionably detached storylines for each. Rey understandably spent most of her time training with Jedi Master Luke Skywalker (Mark Hamill) but Finn had a forced relationship with the largely forgettable Rose Tico (Kelly Marie Tran) while Poe was made to look like a doofus as he constantly screwed everything up for the Resistance. Thankfully, Rose is relegated to a minor role and the three main characters finally get to share the screen together. One of the main criticisms people have had with The Rise of Skywalker is how they don’t care about the characters. That didn’t appear to be the case with 2015’s The Force Awakens. It’s safe to wonder if people really don’t care or if Star Wars fatigue is taking hold.

Obviously, there are a still some characters left from George Lucas’s original trilogy as well. Joonas Suotamo steps in as Chewbacca the Wookiee for the third time since Peter Mayhew’s retirement and subsequent death earlier this year. Let’s face it, Chewie is always a welcome sight no matter what role he plays. Billy Dee Williams returns as Lando Calrissian in a satisfying bit of fan service and Anthony Daniels has a surprisingly large role as the mostly forgotten C-3PO throughout the first half of the film. The character hasn’t gotten much love in this new trilogy but he’s quite the chatty Cathy here. Sadly, Carrie Fisher passed away prior to the filming of The Rise of Skywalker but leftover footage from The Force Awakens and The Last Jedi was used to shoehorn her into this installment. They do a relatively good job with it but something definitely feels off about Leia’s scenes. Regardless, the filmmakers did the best they could given the unfortunate situation.

Then, we have Ian McDiarmid as Emperor Palpatine. For the first two films of this trilogy, Supreme Leader Snoke (Andy Serkis) was appointed as the “big bad.” Being the garbage character that Snoke was and Rian Johnson’s pathetic handling of him, J.J. Abrams and company needed to come up with something for The Rise of Skywalker. Bringing back Palpatine may not have been the best idea from a story standpoint though. While this film has quite a few plot holes, this return is a plot abyss. As everyone should already know, Palpatine was killed off by his own protégé, Darth Vader, in Return of the Jedi so why would he be back here? Also, why does he look kind of like the Dr. Channard cenobite from Hellbound: Hellraiser II? McDiarmid does fine in the role as should’ve been expected but viewers shouldn’t expect any explanation in regards to his return. 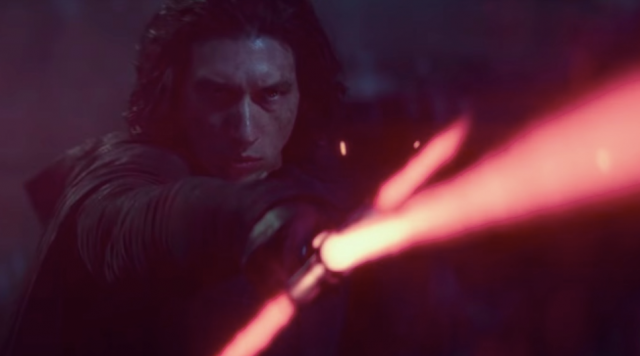 Up to this point, there hasn’t been a ton of praise for the film and, yes, The Rise of Skywalker is very messy in some respects. However, if you’re a viewer that enjoys fan service, then this is the film for you. While it takes a while to wash away the stink of The Last Jedi, the second half of the movie just pummels the senses with everything fans have come to love about Star Wars. Do you want to revisit locations from previous films? You got it. Are you expecting some killer lightsaber duels, space battles, and Force powers? Done. What about that kick ass John Williams score to hype up the film’s best moments? Well, those moments are some of the best that the film has to offer. Despite its many shortcomings, The Rise of Skywalker boasts an epic conclusion which showcases all of the best things Star Wars has to offer. Again, there are a lot of plot holes that are left unfilled but it’s acceptable when a film packs the emotional final punch that this one does.

While most people are crucifying Star Wars: The Rise of Skywalker, we’re going the opposite direction and giving it top praise. This is a tough film to score given its plethora of flaws. No, it’s not perfect by any stretch of the word but it checks all the boxes it needs to by the end. There will always be the question of “what could’ve been” in regards to Episodes VII-IX. The Snoke storyline goes nowhere, Finn and Rey’s budding relationship is abandoned in The Last Jedi and, most importantly, fans never got to see a full onscreen reunion of all their favorite Star Wars characters one last time. That itself is simply unfathomable. Yet, J.J. Abrams clearly did his best to make up for The Last Jedi. For some fans, his goodwill and fan service isn’t going to be enough. That’s completely understandable and, frankly, this film isn’t high art. Though, if you’re going into The Rise of Skywalker with an open mind and looking to be entertained, you may find yourself having a total blast. If not, let’s just agree to disagree.