When it comes to Halloween influenced cinema, it’s easy to immediately think of horror films. However, there’s more out there to get people into the fall spirit. Countless television shows like South Park, Friends, and It’s Always Sunny in Philadelphia have featured Halloween specials and some, like Chilling Adventures of Sabrina, embody the holiday with every episode. Then, there are the numerous animated films and shows that are essential watching on a yearly basis. Titles like the Treehouse of Horror episodes of The Simpsons, It’s the Great Pumpkin, Charlie Brown, and, of course, The Nightmare Before Christmas have been classic since their respective releases. In this same vein, there’s one iconic family that shouldn’t be forgotten during Halloween: the Addams Family. It has been 26 years since a theatrically released film based on the Addamses has been released. Unfortunately though, the new animated version, simply titled The Addams Family, is a bland and boring film that fails to do anything the least bit creative with some of the most outlandish characters ever created.

The family was created by freelance cartoonist Charles Addams. Known for their love of the macabre, the Addams Family was first introduced in a series of comic panels in The New Yorker starting in 1938. Though, greater popularity would come when the family starred in their own television show beginning in 1964. The show ran for two seasons and totaled 64 episodes. From here, the family would be featured in a number of animated series, video games, films, books, and even a musical. Other than the 60’s show, most people remember the Addams Family for their two 90’s films, The Addams Family and The Addams Family Values, starring Raul Julia, Anjelica Huston, and Christoper Lloyd.

The 2019 animated version of The Addams Family opens with the marriage of Gomez (Oscar Isaac) and Morticia (Charlize Theron) Addams. They’re driven off by the townspeople and relocate to New Jersey where they raise their two children, Wednesday (Chloë Grace Moretz) and Pugsley (Finn Wolfhard). Soon, the Addamses, along with Uncle Fester (Nick Kroll), their butler, Lurch (Conrad Vernon), and a disembodied hand named Thing become the scourge of the nearby town of Assimilation. Reality TV host, Margaux Needler (Allison Janney), intends to renovate the Addams house to fit the community she built in Assimilation and drive the family away. Meanwhile, Wednesday Addams befriends Margaux’s daughter, Parker (Elsie Fisher), who contributes to Wednesday’s rocky relationship with Morticia.

First things first, ignore the plot of the 2019 Addams Family. It’s boring, generic, and completely irrelevant. It’s also nothing that we haven’t seen time and time again from other animated children’s films over the years. Whereas previous versions of the family focused on the main characters, this film spends far too much time with Margaux and her daughter. Most of the scenes with Parker are to build Wednesday and, for the most part, this works. Any scenes with Margaux are the opposite. She too often becomes the focus with the different family members serving as comic relief to whatever she’s doing. Ultimately, there are just too many different story elements and not enough time being spent with the characters that we’re actually here to see. 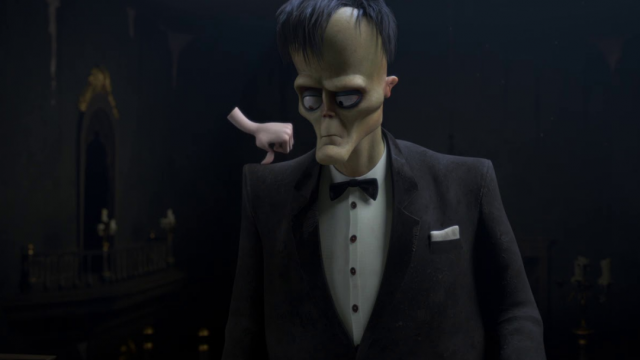 Before we delve too much into the negatives of the 2019 Addams Family, let’s talk about the few positives. The characters look great in their animated form. They’re immediately recognizable as the Addams Family as drawn by their creator decades ago. When the film stays with the family members, there’s a visual appeal. It at least feels slightly different than other animated films. Once it gets to the aptly named town of Assimilation, it looks just like any other animated movie. Also, avoid the 3D version of The Addams Family in theaters. It looks absolutely horrendous. 3D is a gimmick that has long outstayed its welcome and it shows in the laziness behind this film’s conversion.

The cast of the film is actually really quite spectacular. A lot of big names make it into the cast and they do try their best with the sad script they were given. Oscar Isaac channels his inner Raul Julia for his portrayal as Gomez. Oddly enough, though, he feels like the most underutilized character of the bunch. He seems to disappear for stretches and none of his scenes are very memorable. Charlize Theron does a good job as Morticia as do Chloë Grace Moretz and Finn Wolfhard in their roles as Wednesday and Pugsley. Allison Janney does what she can with the character of Margaux but the writing and story do her no favors. Also, Martin Short and Catherine O’Hara are apparently somewhere in this film but I couldn’t really tell you where. That’s perhaps the most depressing things with such identifiable voice talent. In contrast, Nick Kroll does a terrible job as Uncle Fester. Christopher Lloyd was a perfect live action version of the character that you could get behind but Kroll just plays his role for laughs. Sadly, he’s not able to elicit any. 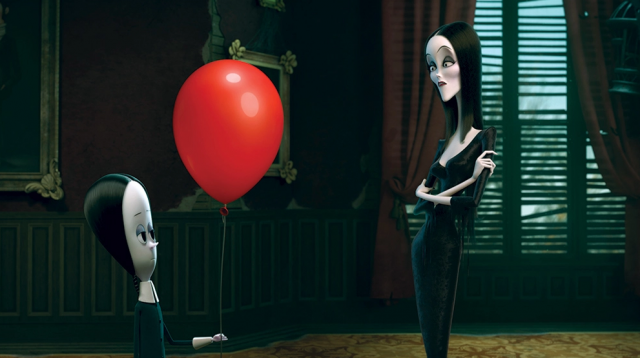 Kroll’s performance only scratches the surface for what’s wrong with The Addams Family but also kind of defines the film in a nutshell. It’s a dumb, unfunny mess. There’s way too much plot for its own good and none of the jokes land. It’s hard to say if children would even find any of this nonsense funny because of how dull everything is. There are so many cliches in both the dialogue and visualized onscreen. Yes, with these characters you’re going to get some traditional Halloween tropes. Though, the film just kind of does exactly what you’d expect with them. In addition, there are a ton of references to horror films sprinkled in which could be fun. Again though, this film has no idea what to do with itself and they just end up falling flat.

The Addams Family is a bad movie. It comes nowhere close to reaching the heights of its animated brethren like The Nightmare Before Christmas, Corpse Bride, or Coraline. It’s difficult to determine who the core audience for this film even is because of its poor slapstick comedy mixed with adult references and a cookie cutter message. Either way, it’s certainly not for fans of the characters. If you’re looking for a film you can just tune out and stare at for an hour and a half, The Addams Family might be for you. Then again, just thinking about watching this film again could bore someone to death. Maybe that’s this movie’s punchline.