The last time we talked about writer/director Guy Ritchie on this site, it was not in a positive light. Last May, Ritchie’s bland and lifeless version of Disney’s Aladdin hit theaters to surprisingly mixed reviews. This is only surprising due to some people actually praising the film. Prior to that, the filmmaker had another misstep with 2017’s King Arthur: Legend of the Sword. While the film isn’t actually that bad, it absolutely bombed at the box office. Now, in 2020, Ritchie tries, and mostly succeeds, to get back on track with his return to the crime genre in The Gentlemen.

At one point in time, Guy Ritchie was a filmmaker on the rise with films like Lock, Stock and Two Smoking Barrels and Snatch as his standouts. He displayed a knack for multilayered storytelling, amusing misdirection, and lovable characters in his films. Sure, something like Swept Away was a blemish on his early career but 2008’s RocknRolla reestablished Ritchie’s unique artistic flair. After getting a bigger taste of success with the two Sherlock Holmes films starring Robert Downey Jr., it seemed that maybe the Ritchie of old would be gone for good. 2015’s The Man From U.N.C.L.E. followed with some decent reviews but then the King Arthur and Aladdin debacles happened. There’s no doubt that Ritchie’s newest attempt is to get back to what he knows and to return to the good graces of his fans.

The Gentlemen opens with a private investigator named Fletcher (Hugh Grant) approaching Ray (Charlie Hunnam), the right hand man of marijuana baron Mickey Pearson (Matthew McConaughey). As Mickey intends to sell off his business once and for all, Fletcher reveals that he was hired by tabloid editor Big Dave (Eddie Marsan) to investigate him. This leads Fletcher to propose a bribe in which Mickey will purchase Fletcher’s incriminating findings for £20 million. As Fletcher relays all of his information to Ray, we meet the other key players such as billionaire Matthew Berger (Jeremy Strong), Chinese underboss Dry Eye (Henry Golding), and the mysterious Coach (Colin Farrell), among others. Along the way, there are plenty of twists, turns, schemes, and deceit between all the characters.

The plot for The Gentlemen is a bit hard to discuss in one paragraph as there are so many people and events to cover. Basically, consider the plot above as the big picture storyline. Throughout the film, there are so many additional plot points that branch off from the main story and that’s The Gentlemen‘s biggest problem. The introductory discussion between Fletcher and Ray feels like it takes forever as Hugh Grant’s Fletcher plays an exposition machine. Fletcher sets up the characters and plot through dialogue with flashback sequences posing as character building moments. Though, most of the things we know about the characters mainly come from verbal descriptions as opposed to really learning who they are through action alone. While we’re often critical of films that do more telling instead of showing, this is an instance where some telling is necessary. With the expansive cast of characters, some context is helpful. However, it takes a good 45 minutes to an hour of screentime to actually get to the meat of the story which is far too long. 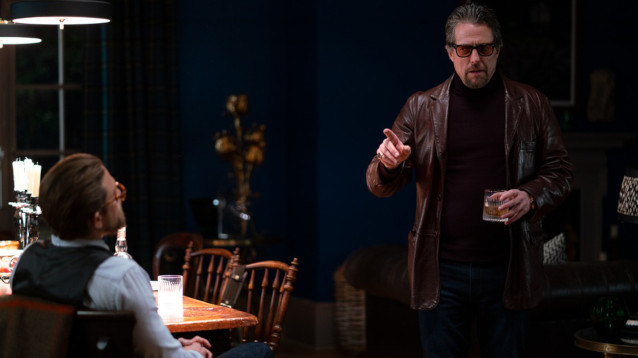 The film is also a little too self indulgent for its own good. In a way, it’s nice to see Guy Ritchie let loose as he did in his earlier work after spending some time in the restrictive Hollywood system. On the other hand, though, you also see that maybe some guidance and restrictions would lead to a tighter overall product. While The Gentlemen is definitely Ritchie’s best film in years, it’s more muddled and nonsensical at times than his early work on Lock, Stock and Snatch. It has the charm and wit of those films but there’s something missing in execution. Also, there are a lot of nods to filmmaking and self-referential bits that feel unnecessary.

That being said, there’s actually a lot to like about The Gentlemen as well. One thing that makes a welcome return to the work of Guy Ritchie is comedy. We spoke about how his last film, Aladdin, was horribly unfunny but that’s not the case here. Contrarily, The Gentlemen is often extremely funny with its bad language, depictions of comic violence, and character reactions. Some of the funniest parts include things like brutally accidental deaths, a fistfight gone wrong for one group, and a particularly vulgar sounding name for a character. Again, this return to form will remind viewers of Ritchie’s best work and instill hope that the filmmaker hasn’t lost his charm. 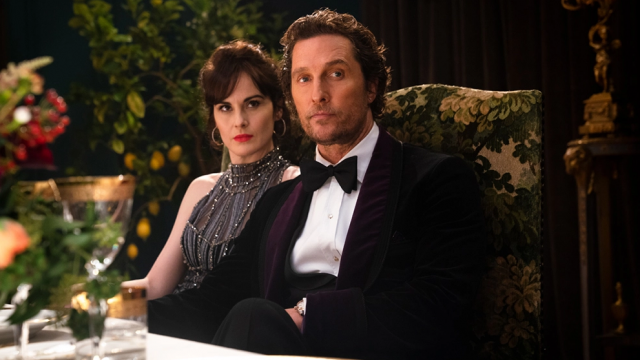 This also carries over to the film’s wonderful cast of characters. Overall, The Gentlemen boasts a strong cast in general and everyone’s in top form. Matthew McConaughey proves once again that he’s an often underrated talent with his portrayal of Mickey Pearson. He’s menacing and ruthless but, oddly, very personable and even honorable. You don’t fault him for some of the bad things that he does because he has every reason to react in such ways. Michelle Dockery is very good as Mickey’s wife, Rosalind. She’s not a constant focus of the film but her scenes carry weight. Despite the aforementioned issue with Hugh Grant and Charlie Hunnam’s heavy dialogue early in the film, both men are excellent in their roles. Grant is completely out of his comfort zone in this role and he shines brightly because of it. Hunnam’s Ray tends to be the film’s main character and his level headed, yet intense, demeanor works perfectly. Though, it’s Colin Farrell’s Coach that steals every scene he’s in. He’s used sparingly but commands your attention, and a fair share of laughs, every time he’s onscreen.

At times, The Gentlemen can be a total slog to get through. This is especially true in the first hour or so. However, there’s just too much classic Guy Ritchie nonsense to enjoy. Once the film starts kicking into high gear, it’s really, really good. From the characters, to the laughs, and even to the more polished story arcs, The Gentlemen is a return to form for a downtrodden filmmaker. For those who loved Ritchie’s older work, you’ll be right at home with this new one. What’s even more encouraging is that he even has another crime/drama, Cash Truck, in production. Perhaps it took something as awful as Aladdin to put Guy Ritchie on a path to recapture his former glory. Judging by his work on The Gentlemen, it just might’ve been worth it too.