We live in a day and age where the world has gone soft. There’s no way to sugarcoat it. With the emergence of social media and people broadcasting their lives for everyone to see online, the floodgates have opened to judgment, criticism, unwanted opinions, etc. For the people that aren’t easily offended, this is all fine. However, it seems that most people do take offense when it comes to others voicing their feelings. A prime example of this is right here on Cinema Smack. Not everyone is going to like what we have to say on this site and that’s perfectly fine. Film is a subjective medium and readers are encouraged to formulate their own opinions on the hottest new movies and shows. Ultimately though, we now live in a time where sometimes it’s just best for everyone to keep their mouths shut. Apparently, someone didn’t get the memo about this when it comes to Craig Zobel’s new action/horror satire, The Hunt, and it’s all the better for it.

As one could imagine, The Hunt‘s release was mired in controversy. Originally supposed to be released on September 27th last year, the film was pushed back due to the mass shootings in Dayton, Ohio and El Paso, Texas last August. The early test screenings of the film were then met with negative reactions and some supposed discomfort given the political nature of the film. Even President Donald Trump alluded to the film and the plot’s intention to “inflame and cause chaos” in a tweet last August. He didn’t specifically namedrop the film but most believe The Hunt to be the one he was talking about. Needless to say, the film faced an uphill battle in winning over audiences due to the initial negativity surrounding its release.

The film opens with an unknown woman sitting alone replying to a text message thread. The participants of the thread start bashing the president over something that affected the group before expressing their excitement over the upcoming hunt at “The Manor.” Soon, the film moves away from the group texters and focuses on a separate group of twelve people who awaken in a clearing with gags in their mouths. As characters like Snowball/Crystal (Betty Gilpin), Gary (Ethan Suplee), Yoga Pants (Emma Roberts), and Don (Wayne Duvall) begin to stir, they discover a cache of weapons and the hunt officially begins. Being shot at from all directions, Crystal disappears from the initial flurry and starts hunting those that are out to kill her instead.

When it comes to the plot of The Hunt, it’s hard not to compare it to last year’s Ready or Not. Both films keep it simple and consist of a group of people tracking and attempting to kill their respective heroine. While their reasoning is different, there’s not a lot of time wasted on any elaborate story elements. The film jumps right into the action pretty quickly. In addition, both focus on dark and brutal comedy throughout. There are plenty of boneheaded characters with fun and bloody deaths to satisfy viewers. The film also bears some resemblance to Hostel as the hunters basically toy with their victims and are free to kill them however they see fit. Though, the lighthearted and comedic tone keep it more fun than the exploitative gore-fest mentality of the Hostel series. 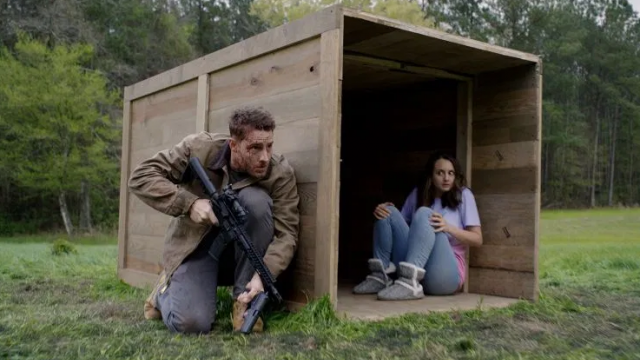 It’s actually quite surprising how many people were offended by the film following its initial test screenings. Then again, given how delicate society has become, maybe it’s not all that shocking. Yet, there’s no doubt that The Hunt plays for laughs more often than not and doesn’t force-feed a political agenda. Yes, politics are addressed in the film at times with quick jabs at the parties and a clear separation between liberal and conservative. However, it’s not as outright as some would have you believe. Instead, there are often jokes about political correctness, racism, sexism, and every other offensive modern day societal sore spot. Viewers that take these things overly serious aren’t likely to find any joy in the film. Those who acknowledge these issues but still agree with how ridiculous things have gotten in recent years should have a little fun with it. Even after the film’s early backlash, the marketing team decided to plaster negative quotes and their release date change all over the film’s official poster. As a marketing tool, the poster further proves how absurd things have gotten here in the 21st century.

It’s all fine and dandy for a film to shock and delight but it also needs the right cast in place to convey its message. Luckily, The Hunt has a pretty great cast full of people we’ve all seen in other films and TV shows. There isn’t a ton of name value outside of two time Academy Award winner Hilary Swank who’s a surprise inclusion in this film. However, cast members like Ike Barinholtz (MADtv), Glenn Howerton (It’s Always Sunny in Philadelphia), and Amy Madigan (Field of Dreams), along with the aforementioned Ethan Suplee (American History X) and Emma Roberts (American Horror Story), are instantly recognizable faces that carve out memorable roles for themselves here. The biggest standout is Betty Gilpin of Netflix’s GLOW fame in the lead role. Like Samara Weaving’s Grace in Ready or Not, Gilpin’s Crystal is a force to be reckoned with when facing her pursuers. Every time she’s onscreen you look forward to seeing how she outsmarts them next. 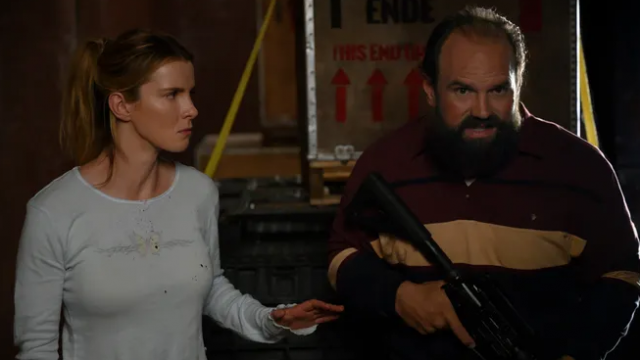 Honestly, The Hunt is kind of a tough film to critique when it comes to its negatives. It feels like everyone is going to have a different opinion of this film based on their individual beliefs, ideals, and political affiliations. As a pure action/horror/comedy emphasizing the fragile nature of today’s America and how easily things can be grossly misinterpreted, the film is excellent. Though, if you’re looking for a deeper meaning or message, it’s not the piece of political propaganda that it has been blown up to be. Frankly, it’s safe to wonder what the motivation behind the film really is given its penchant for trying to offend people. There’s no real substance behind the film’s events other than proposing that people are stupid and the media is needlessly harmful. Outside of this, the film is mostly spectacle.

In that regard, though, The Hunt is a success. If you’re just looking for some fun death sequences and a few laughs, it’ll be right up your alley. That’s definitely the target audience for this film as anyone firmly entrenched in politics or social acceptance is bound to find it tasteless and stupid. It’s no wonder why fans and critics alike have been so torn on the film. As of now, The Hunt is sitting at a middling 50 out of 100 on Metacritic and a 53% on Rotten Tomatoes. Even though those two scores aren’t spectacular, we encourage people to go out and see The Hunt for themselves. In fact, it’s one of the recent theatrical releases set to hit video-on-demand services given the current COVID-19 pandemic. If you’re looking for a new film to watch during your quarantine, give it a shot.