As most people know, it’s not easy for sequels to best their predecessors. Over the course of film history, only a handful of sequels have been able to pull it off. That being said, has there ever been a full rebooted series that has trumped the originals? If there wasn’t before, there is now. War for the Planet of the Apes is another fantastic installment to the Planet of the Apes franchise and rounds out a perfect trilogy filled with action, drama, and some of the best CGI to date.

With other big name franchises like Pirates of the Caribbean, Transformers, and Spider-Man headlining the summer release schedule, this film easily could’ve gotten lost in the mix. Though, two of those three aforementioned franchises were met with poor results as, hopefully, people begin to tire of bloated sequels and reboots. War for the Planet of the Apes, as well as the two films that came before it, are in a league of their own. While none of them are perfect, the collective story that they tell is perfect.

The plot focuses, once again, on the leader of the apes, Caesar (Andy Serkis). Years have passed since the events of Dawn of the Planet of the Apes and the ape colony is in hiding. Due to the impending danger they face, Caesar intends to move the apes across the desert to a new home. They are hunted by the mysterious Colonel McCollough (Woody Harrelson) who infiltrates them and kills Caesar’s wife and oldest son. From here, Caesar feels only hatred towards the humans and sets out to find The Colonel while sending the rest of the apes to their new home. Caesar is joined by Maurice (Karin Konoval), an orangutan, Luca (Michael Adamthwaite), a gorilla, and Rocket (Terry Notary), another chimpanzee, on his journey.

While searching for The Colonel, the group discovers a young girl, later dubbed Nova (Amiah Miller), who’s unable to speak and Bad Ape (Steve Zahn), a talking chimpanzee who lives as a hermit. Bad Ape is able to lead Caesar to The Colonel’s location while Nova’s vulnerability drives Maurice to watch over her. Together, they discover The Colonel’s location at a pseudo ape concentration camp and soon discover his motivations. 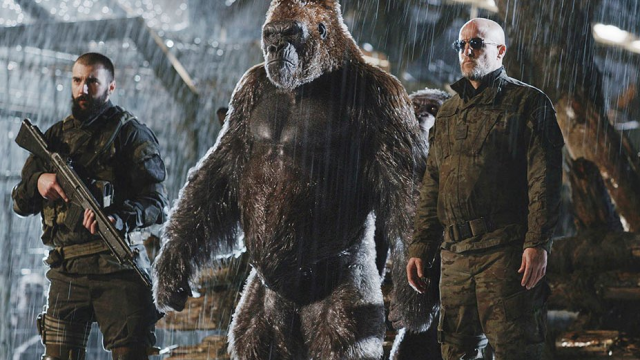 If you’re looking for summer blockbuster fun, you may be a bit letdown by War for the Planet of the Apes. There are very few lighthearted moments. The only ones that stand out are very brief moments with Bad Ape’s awkwardness around his new friends. Even Woody Harrelson, who’s well known for his comedic performances, avoids the laughs with his ruthless portrayal of The Colonel. This is easily the bleakest Apes film to date and it’s not a bad thing. The tone is absolutely perfect for the events of the film and, in addition to its bleakness, it’s equally as emotional.

The CGI characters are astounding to look at onscreen. While there are far too many instances of bad CGI in Hollywood (i.e. Michael Bay movies), the Apes series has used the technology to perfection. There are plenty of closeups on the apes’ faces where it’s nearly impossible to tell that they’re created using CGI. Also, interactions with human characters look fantastic and there’s never a time when you are taken out of the story by poor effects. Without doubt, these are some of the best computer animated characters to ever grace the big screen.

The best part about War for the Planet of the Apes is in its substance. Throughout the entire movie, there’s only one scene where a character gives any sort of exposition. Otherwise, the story is construed almost entirely through action, facial expression, body language, music, and pure emotion. Simply put, this is how to show the story as opposed to telling it. Even the environmental changes from forest to beaches and, eventually, the snowy mountains mark different moments in the overall story. It’s amazing that the filmmakers can make you feel so much with so little. It’s the subtleties that make this film, and trilogy, one of the best in recent years. 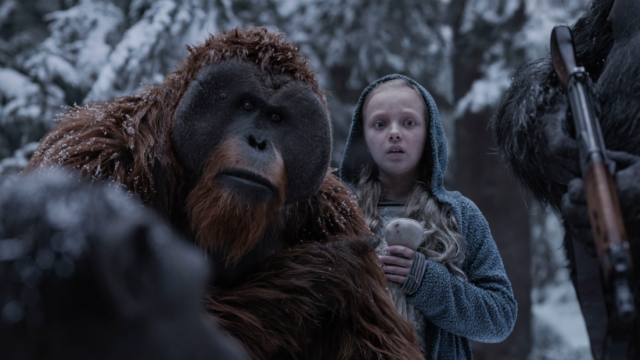 The few negative aspects of War for the Planet of the Apes are extremely minor and don’t take away from the overall experience. Unfortunately, it’s difficult to mention them without spoiling anything. Therefore, we’ll keep it vague. The story doesn’t feel quite as concise as the two previous movies. Yet, it does feel like a satisfying conclusion to a trilogy while also leaving the door open for potential sequels. The final battle between apes and men is well done. Though, while there’s a nice twist towards the end, you may be slightly disappointed by the lack of payoff. Again, these are very minor gripes and the film works just fine regardless.

There’s not much else to say. This recent Planet of the Apes trilogy is awesome. They’re not bloated action flicks with constant explosions and ugly CGI. They’re the exact opposite. They contain the perfect amount of action mixed with beautiful CGI and tons of emotion. The characters truly make you feel something which is one of the best compliments that can be offered. This film even had nods to the original 1968 film with some of its characters, locations, and props. With each of these newest Apes films, there’s a constant discussion over which one’s the best. In all honesty, there are arguments to be made for all three being the best. It’s all up to interpretation. All that’s for sure is that War for the Planet of the Apes satisfyingly rounds out one of the greatest film trilogies, perhaps, of all time.