When it comes to cinema, a filmmaker’s imagination is the only limit. If there’s a story that someone wants to tell, there’s always a way to do so. Of course, a big budget is always helpful. This is especially the case in the science fiction genre where special effects are often expected and anticipated. However, Aleem Hossain puts this to the test with After We Leave. With its low budget, efficient special effects, and a quality cast, After We Leave is a fine debut feature from a driven filmmaker.

The film is set in the near future and centers on a man named Jack Chaney (Brian Silverman). He wakes in a field to watch spaceships launching in the distance. Jack returns home to Los Angeles in search of his wife, Vanessa. The city is in shambles as resources dwindle and crime becomes a standard way of life. Because of this, Jack acquires visas for both himself and Vanessa to leave the planet to live in an off-world colony. Unable to find his wife, Jack turns to some old acquaintances for help. Among them are Lexi (Anita Leeman Torres), a woman with whom Jack has an affair, Morgan (Anslem Richardson), an old friend, and Eric (Clay Wilcox), a past criminal partner who enlists Jack’s aid for one last job in exchange for Vanessa’s location.

After We Leave‘s story is simple but mostly effective. Viewers are mostly kept in the dark on Jack’s past and how things have gotten to where they are. He has obviously gone through a rough patch in his life. Though, it appears that much of that was probably of his own doing. Still, the performance from Brian Silverman keeps you interested in Jack’s search for his wife. His run-ins with past acquaintances are also pretty standard but still effective. It feels like there’s a lot of history between the characters that viewers aren’t always clued in on. There’s a rivalry between Jack and Eric that doesn’t get much backstory. Yet, the film does a solid job of portraying their relationship as rocky at best. The film is strange in that it doesn’t give you much reason to care about any of its characters and, yet, you still do. This is a perfect example of a film that utilizing “showing” its audience something instead of “telling” it. 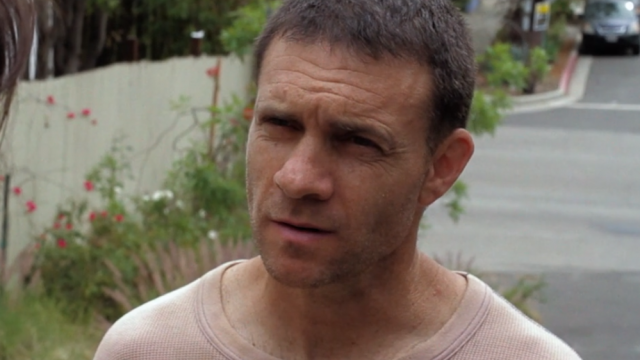 Despite a $30,000 budget, the film looks and sounds great. The somber music from Chanda Dancy perfectly sets the tone for the film and its story. There isn’t a lot of happiness to go around in After We Leave and the music perfectly conveys the sadness and hardship that the world’s inhabitants face. Visually, the camerawork is sharp and never feels low budget. Julie Kirkwood handles the cinematography after her work on last year’s Destroyer and 2016’s underrated Alien-esque horror flick, The Monster, and does a wonderful job. Being set in the near future, there’s also some decent special effects work in spots. Effects are used sparingly but, when they are used, they’re done well. It sort of feels like a lower budget spiritual predecessor to 2018’s Upgrade. Both are very different films but they feel as if they could take place in the same sparsely inhabited, slightly futuristic world.

The best thing about After We Leave, though, is the world that it’s set in. It’s one that’s familiar but very obviously changed from what we know here in 2019. The bustling Los Angeles city streets are often barren throughout the film. It’s not quite post apocalyptic but it’s certainly trending in that direction during the time period of the film. It seems as if most decent people have left Earth to live in off-world colonies while the criminals and unfortunates are left to claw for scraps on a dying planet. Writer/director Aleem Hossain crafts a depressingly compelling world to absorb where law and order have fallen by the wayside. Earth is a forgotten planet and you’re either foolish or simply unlucky to be stuck here. 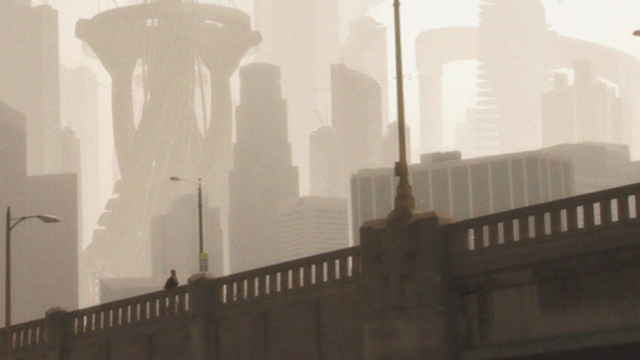 Unfortunately, After We Leave‘s greatest accomplishment is also its biggest downfall. For as intriguing as the film’s world is, viewers just aren’t ever allowed to become fully absorbed in it. In his director’s statement, Hossain explains his desire to make a gritty science fiction drama that focuses mainly on its characters. While Hossain certainly accomplishes this, it feels like there’s a lot left to explore in this world. What happened here and is it beyond saving? Is colonization on a foreign planet truly a better option? Everything is kept pretty vague overall and there’s little to latch onto in terms of story. The near future portrayed in the film is just loaded with intrigue but doesn’t get the spotlight. Instead, the film sometimes feels hollow and empty which, actually does work for the story being told. However, it’s safe to wonder if After We Leave could’ve been so much more.

Regardless, what is here is still really good. While the story is a bit run-of-the-mill at times, Hossain crafts a stimulating cinematic experience with his character driven mystery at its core. Despite its low budget, After We Leave never once feels that way and this is a testament to Hossain’s vision. He set out to prove that sci-fi doesn’t have to be all about special effects or space exploration and does so in a big way. Again, it does feel like there may have been some good stuff left on the table in its uncharted world building. Though, After We Leave is still an easy recommendation for fans of gritty indie dramas and thinking man’s science fiction.

*After We Leave is currently in the midst of a festival run and will be screening on November 29th at the Berlin Sci-Fi Filmfest. Check out the trailer below.*