In the time of a pandemic, rioting, shootings, etc., why not throw an old fashioned alien invasion in for good measure? In a year currently devoid of a big science fiction/action film (Tenet releases in the US next week), we look to independent cinema to prove that you don’t need a huge budget to make an effective film of this ilk. Screenwriter/director Brandon Slagle’s new film, Attack of the Unknown, released today on video-on-demand platforms and is one that B-movie and sci-fi fans will want to check out for themselves.

The film wastes no time getting started as a SWAT team in Los Angeles aims to take down vicious crime boss Miguel “Hades” Aguirre (Robert LaSardo) during a high level drug deal. The team, led by Vernon (Richard Grieco), arrests Hades but the FBI steps in to take over the case. Now, the team must escort Hades to a new location. However, something strange is going on as electrical disturbances affect the San Fernando Valley. Soon, an alien space ship is revealed to be hovering over Los Angeles with sinister creatures attempting to harvest blood from the city’s population. Vernon, Hannah (Jolene Anderson), Maddox (Douglas Tait), and the rest of the SWAT team must escort Hades through a city torn apart by chaos and also figure out a way to stay alive in the midst of an alien invasion.

As you may be able to tell from the description, Attack of the Unknown has a pure B-movie plot. Though, Slagle’s screenplay, adapted from a story by Michael and Sonny Mahal, does take its subject matter seriously. Everyone appears to be all in on this story as there’s very little levity and camp as there often would be in an alien invasion flick of this nature. As it is, it’s kind of a mix between titles like Aliens, SWAT, and District 9. This is a departure from previous Mahal Empire production Art of the Dead which we reviewed on this site last November. That film fully embraced its B-movie roots and was nonstop entertainment. With Attack of the Unknown, it may take itself a little too seriously at times. While viewers may be craving some vampiric alien fun, they’ll often have to sit through lengthy talking segments and deliberately paced action sequences without the absurdity and gore that might be expected. 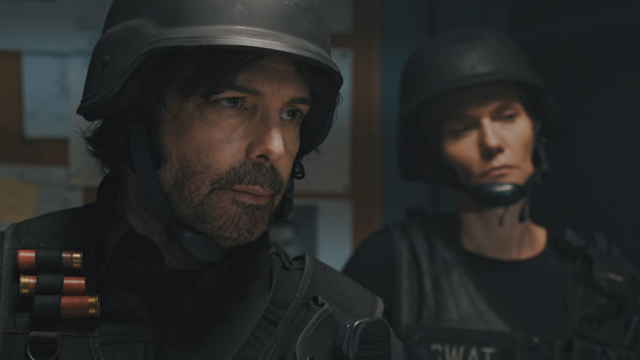 That’s not to say that there’s no enjoyment to be had though. In fact, the film is actually very well made and acted which is also uncommon for B-movies. Richard Grieco heads a believable cast of characters that bring personality to their roles even if there might be just a few too many characters overall. Grieco does a good job in the lead role as Vernon, a man suffering from myeloma and with nothing to lose. The direct support to him is kind of split between Jolene Anderson’s Hannah and Douglas Tait’s Maddox. Either one would’ve worked fine with an increased role but, instead, they both come off as half baked due to their split time. Regardless, they both do the best with what they have. The standout of the film may be Robert LaSardo as Hades. He doesn’t get as much to do as he probably should but he brings a presence to the film as a formidable foe. Tara Reid also makes an appearance in a small role not unlike her brief screentime in Art of the Dead.

Where the film will really impress viewers is in its technical aspects. The film was shot on location in Los Angeles and there are some excellent sweeping shots of the city and its surrounding areas. Despite its low budget, the film mostly doesn’t feel that way other than in some of its edits and some of the CGI. At times, the camera will close in on characters during action scenes rather than show off what’s happening. This is typically used as a cost cutting measure and that appears to be its use here as well. Despite a few cartoony looking effects, most of them that are present in the film are quite good. The alien costumes are very detailed and don’t come off as cheap or cheesy. The suits aren’t as impressive as something like the xenomorph from the Alien franchise but they’re worlds better than, say, the aliens from Scary Movie 3. Maybe the best visual effects work comes in the form of the alien spaceship hovering over Los Angeles. This idea hearkens back to District 9 and is just as effective here as it is in that film. The ship is absolutely massive and feels like a legitimate threat to humanity. It offers up the most intrigue and you kind of wish there was more of it by the film’s end. 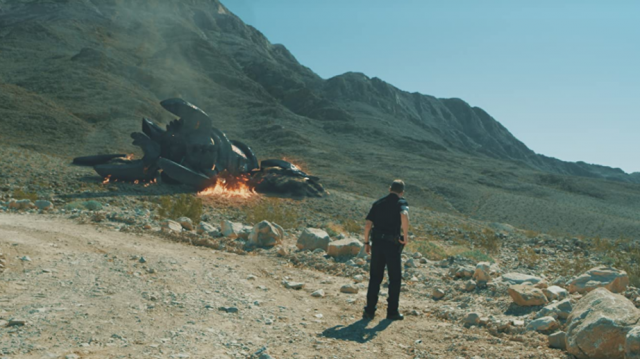 The main thing that holds Attack of the Unknown back from reaching its full potential is the back and forth nature of the film as a whole. On one hand, it’s an intriguing idea and viewers will crave more of the alien story. Yet, you’ll keep getting pulled back into this SWAT team escort mission. Then, you may be wowed by some of the great effects work before seeing some that take you out of the experience. The film feels pretty long at 103 minutes especially during lengthy talking sections or semi-suspenseful buildup. The aliens are shown early and often which minimizes the tension of them stalking their prey. In the original Alien, it took a long time to reveal the xenomorph and you felt like it could literally strike from anywhere. Here, you see the aliens follow their potential victims for so long before an encounter. A shorter runtime, quicker edits, and less dialogue could clean up a lot of the issues that the film seems to have.

We’re going to go with an overall neutral rating for Attack of the Unknown. It’s not a bad film by any means and some B-movie/alien invasion fans are sure to like it. For those looking for something more in tone with Alien or District 9, you may be a little disappointed. It really depends what you’re going into it for. The film has a little bit of an identity crisis as it almost can’t decide if it wants to be a B-movie or if it wants to be taken seriously. Either direction probably would’ve panned out just fine. Again, with Art of the Dead, it firmly chose the B-movie direction and was all the better for it. In its current state, Attack of the Unknown is a mixture of both which is sure to leave viewers torn. It’s one of those films that should be judged on a per case basis. For some, it will hit a sweet spot while others will likely shun it. For us, Attack of the Unknown is a film that’s worth a watch for the visuals alone. From there, it’s up to you to decide how you feel about it.

*Attack of the Unknown is currently available for rent or purchase on video-on-demand platforms like Amazon, Google Play, Vudu, and YouTube. Check out the trailer below.*