It’s that time once again. October. With Halloween approaching, we here at Cinema Smack will be talking about all things horror for the entire month! As we’ve done in previous years, we’re going to kick off the month with something new for horror buffs to check out. Coming off the huge success of 2018’s A Quiet Place, screenwriters Scott Beck and Bryan Woods return with something very different for their newest directorial output. Their new film, Haunt, is surprisingly everything you want from a haunted house thriller with its likable characters, identifiable villains, smart kills, and chilling atmosphere.

The film takes place on Halloween where Harper (Katie Stevens), a girl dealing with her abusive boyfriend, Sam (Samuel Hunt), is coaxed out by her roommate, Bailey (Lauryn Alisa McClain). At a nearby club, the two meet up with Nathan (Will Brittain), Evan (Andrew Caldwell), Angela (Shazi Raja), and Mallory (Schuyler Helford). The group leaves the club to find some local haunted house attractions and happen upon one in the middle of nowhere. A mute in a clown mask confiscates their cell phones before allowing them entry. Initially, the usual haunted house scares fail to scare the patrons. However, the group then sees a young woman who appears to be tortured before discovering that the attraction’s scares may be more real than they imagined.

While many films feature a legitimate haunted house as their setting, Haunt opts for a haunted house attraction instead. It’s quite reminiscent of the first horror film we reviewed last October, Hell Fest. This isn’t really a bad thing as Hell Fest was actually quite effective as a throwback slasher flick and both films capture the very essence of the fall season and Halloween in general. Obviously, Haunt isn’t the first of its kind to feature an attraction as its setting as we reviewed the third installment of the Hell House LLC franchise just last week. Overall, it lands somewhere right in the middle of these two titles. It has the thrills of the original Hell House LLC mixed with the blood, gore, and fun of Hell Fest. There’s even a splash of the Saw franchise mixed in for good measure. 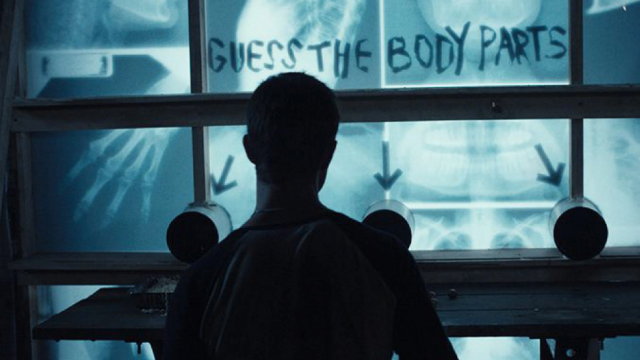 One thing that Haunt especially gets right is its cast. In most modern horror films, the majority of the characters are cannon fodder for the villains to kill off one by one. While there are deaths in the film, Beck and Woods do a great job creating distinct characters so that their deaths actually mean something. The film also avoids traditional horror archetypes like the jock, cheerleader, stoner, and minority. The group of characters in the film feels like your typical batch of college students out to have some fun on Halloween. The film doesn’t fully delve into each of their backstories but there’s enough there to differentiate between each of them. Though, the characters of Angela and Mallory are slightly devoid of personality. The standout among the group is Katie Stevens as Harper. She’s a sympathetic character with some deep-seated issues. Yet, in times of need, she shows strength in the face of panic. Even the villains throughout the film are identified by their cheap, generic Halloween masks. They actually work very well and each of the villains has a specific role to play.

It’d be foolish to think that anyone goes into a film like Haunt expecting some in depth character building. Most people are here for the scares and the gore. In this respect, Haunt fully delivers. It doesn’t focus much on false or jump scares, though there are some loud musical cues. Instead, the film uses common haunted house tropes that escalate into full blown terror as the story continues. Viewers experience the film in the same way that the group experiences the haunted house. At first, it’s unclear as to whether the attraction and performers are just a bit extreme in their methods to scare visitors. Without spoiling anything, there are many times where it seems like the film could go either the route of innocence or, conversely, nightmare. Unlike many horror films, the plot always has you guessing and is most welcome in a sometimes tired genre. As for gore, Haunt never gets overly cute. There are some pretty cool traps and ideas throughout the film but is never too over-the-top. 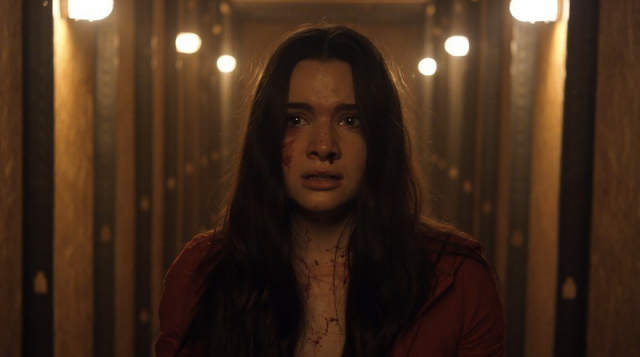 If there’s any downfall to the film, it’s that you find yourself craving a little more backstory on the haunted house and its inhabitants. Again, this is spoiler free so this section will be kept vague. The film does a good job showing viewers Harper’s past but the most intrigue comes from the villains. You constantly have questions while watching them. Who are these people? Where did they come from? Why are they running this haunted house? It’s tough to downgrade the film for leaving this ambiguous but it feels like there’s so much more to be explored with this setting and these characters. Not knowing these things doesn’t hurt the overall experience as it stands but it does leave you craving more.

When all’s said and done, Haunt is a surprisingly good independent horror film. It looks and sounds great, has some very good characters and villains, and is mostly everything you’d want. It also doesn’t fall into too many cliches of the horror genre which is very refreshing. Between this film and A Quiet Place, Scott Beck and Bryan Woods show their range as horror writers. While the tone of the latter film remains serious for its entire runtime, Haunt allows itself to have a little bit of fun too. Though, its fun is never insulting to the genre. For horror fans, Haunt is the type of film you want to watch at this time of year. It embodies everything that people love about the season and the fall holiday. It won’t change anyone’s mind about horror but it should please viewers looking for a fun and bloody time.