On this site, we’ve kicked off the last two Octobers by reviewing films from writer/director Stephen Cognetti. 2017’s Hell House LLC and its 2018 sequel, Hell House LLC II: The Abaddon Hotel, were both able to scratch the horror itch that we get during this time of year. While neither film is perfect, they’re very well made and bring the scares. Cognetti has remained hard at work as we get a new film in the series for the third straight year. This past Thursday, Hell House LLC III: Lake of Fire premiered exclusively on the horror streaming service, Shudder. Like its predecessors, this third go-round continues a trend for eerie scenes and a crafted story that continues to escalate.

The film picks up nine years after the tragedy of the original Hell House and one year after the investigative team from the second film disappeared. The Abaddon Hotel is set to be demolished when a young millionaire, Russell Wynn (Gabriel Chytry), steps in at the last minute to purchase the hotel. Russell plans to open the hotel to the public to see his interactive performance piece, Insomnia. Vanessa Shepherd (Elizabeth Vermilyea) from the show, Morning Mysteries, visits the hotel to document the production of Insomnia. Well aware of the history of the hotel, Russell and his crew have strict rules in place to avoid any issues. Though, the evil entities of the Abaddon Hotel are up to their old tricks with this new batch of victims.

If you were a fan of the previous two Hell House LLC films, then you’ll feel right at home with this third one. It’s not often that a film series continuously revisits the same locations throughout each installment. With the Hell House LLC films, the Abaddon Hotel continues to be an interesting venue for the horrors that each group of characters must face. As soon as the film begins, viewers will have familiarity and attachment to the hotel and its layout. The camera moves throughout the house while scenes from the previous films are spliced in as a sort of “memory” of what came before. In general, this is a precarious tactic for Cognetti and company to use. It holds your hand reminding you of the other movies and risks being a bit too on-the-nose. Luckily though, it’s used to perfection and serves as a ghostly reminder of all things Hell House. There’s an air of creepiness when shots are duplicated from previous films and you see things that came before Russell’s Insomnia. 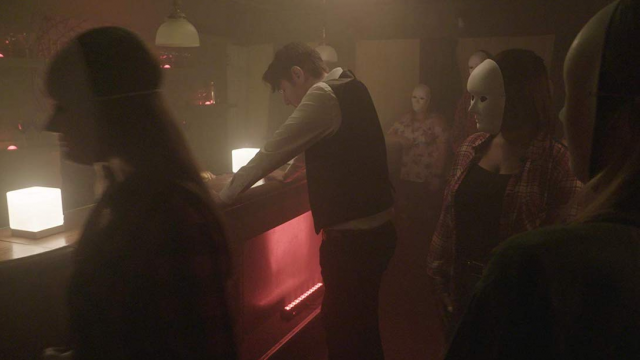 A lot of credit for the film’s success has to go to its technical aspects. Like the previous films in the series, Lake of Fire looks and sounds excellent. The images are sharp and the sound is effective. The camerawork, especially for a found footage film, is excellent throughout. It doesn’t suffer from constant shaky cam or grainy resolution. Viewers can actually sit and enjoy what they’re seeing without constant cutting and bouncing around. As has always been the case with this series, many of the scares come from situational things happening in the background of shots. The same can be said for the sound as offscreen noise frequently pique character interests and causes them to investigate. Things like the damning piano theme from the other films conjure a sense of dread every time they’re heard.

The acting in the film is also pretty good overall. Though, it leaves something to be desired. One of the problems with Hell House LLC II: The Abaddon Hotel was that its characters were decent but they just weren’t memorable. That appears to be the case once again with Lake of Fire. Characters like Russell and Vanessa stand out but it’s still the cast of the original Hell House LLC that remain synonymous. Each character from the first film was distinct whereas many of the characters to come after were lacking that indescribable “it” factor. Talent like Sam Kazzi, Bridgid Abrams, Leo DeFriend, and Jordan Kaplan all play their roles quite well. It’s just that the collective cast doesn’t hold up the way that the original one does. Theodore Bouloukos and Brian David Tracy both return to the series as author Robert Lyons and Andrew Tully respectively. Bouloukos especially is engaging to watch as his character feels like he has a wealth of knowledge on the Abaddon. It’d just be nice if there’d be more of the history that was promised but left undelivered in the last film. 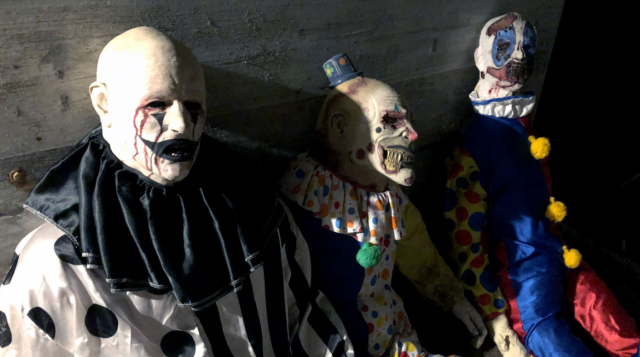 Lake of Fire, and the Hell House LLC films in general, is a rare case that shows that there’s still life in the found footage style of horror. Though, one still can’t help but wonder if there’s a better way to tell these stories. The first film mixed found footage with faux documentary and newsreel footage. It legitimately felt like watching a real life ghost story onscreen. The next two installments haven’t necessarily exceeded expectations. Though, they have at least met them. As you watch the films, it just feels like too many of the scenes are hamstrung by the style. There always needs to be an excuse for a camera to be filming the events. Both Hell House LLC II and III lack the documentary feel to the point that maybe a traditional filming style is a much better route to go at this point. Yes, the series is now known for its found footage style. However, it still feels like there’s creativity being held hostage by it.

Hell House LLC III: Lake of Fire doesn’t reach the heights of the first film but it offers up more promise than its immediate predecessor. Of course, we won’t give away the ending here but, there’s a larger intrigue by the time the credits roll that will stick with you more than The Abaddon Hotel did. Overall, the Hell House LLC trilogy is very, very solid and probably one of the best examples of modern found footage horror out there. Stephen Cognetti and his crew do a great job avoiding cliches and many of the problems that come with the style. While none of the films will convert non-horror fans, all three are well worth a watch if you love the genre.

*All three Hell House LLC films are currently available to watch on Shudder. Click here to sign up for a free seven day trial of the streaming service.*