In today’s culture, people love living vicariously through others. Via things like social media, there’s someone always watching whatever others are doing. We live in a society based on obsession and excess and, for some reason, we all feel the need to broadcast it to the world. It’s no surprise then that films about obsession always seem to grab people’s attention upon release. There’s something that’s absolutely chilling about some mild fixation completely derailing into madness by a film’s end. In the past, films like Misery and One Hour Photo have featured troubled individuals becoming fully engrossed in the life of someone else. With his new film, Homewrecker, director Zach Gayne channels these quality obsession-based titles with a creepy, yet fun, tale topped with some wonderfully psychotic performances from its female leads.

The film opens with a middle aged woman named Linda (Precious Chong) bumping into a young married woman, Michelle (Alex Essoe), a few times during the day. A bit pushy, Linda insists on joining Michelle at a coffee shop where Michelle intends to get some work done while waiting for a text message response from her husband, Robert (Kris Siddiqi). Instead of a quiet afternoon by herself, Michelle reluctantly agrees to redecorate Linda’s home. Upon going to assess Linda’s house, Michelle realizes she may have made a friend that she doesn’t necessarily want. In addition, Michelle’s new friend isn’t exactly open to the idea of her leaving either.

On the surface, Homewrecker may seem like a dramatic thriller in the vein of Misery or a newer film like 2019’s Greta. However, it’s much more than that. While there are the thrills and chills you’d expect from a film about obsession, there are also elements of both horror and comedy that keep the experience unique and fun. Throughout much of the film, Michelle knows that Linda is a bit loopy but doesn’t want to be mean to her. She gets roped into a bunch of things she doesn’t want to do and fails to cut bait before things spiral out of control. Though, it isn’t for lack of trying as Linda consistently coaxes Michelle into staying longer. As things break down between the two women, there are bouts of discomfort, girl talk, board games, and acts of violence spread out along the film’s runtime. The possibilities are exhausted throughout the film and in the best ways. 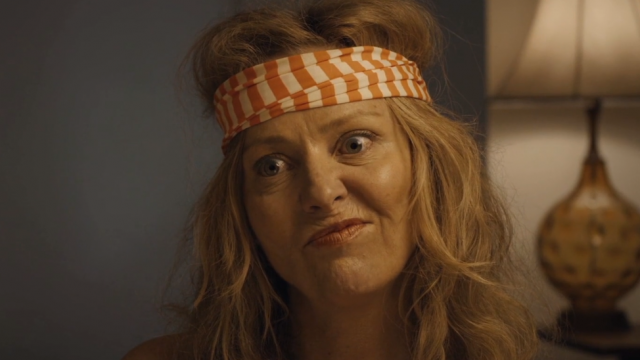 The success of Homewrecker is clearly tied to the film’s two female leads. Both Alex Essoe and Precious Chong pull double duty as co-screenwriters with Zach Gayne along with starring in the film. Essoe, who you may have seen in flashback scenes as Wendy Torrance in last year’s Doctor Sleep, actually channels her inner Shelley Duvall once again here. In earlier scenes, Essoe’s Michelle is weirded out by Linda but goes along with her activities to be nice. As things break down, Michelle is confused and terrified just as Duvall’s Wendy is in The Shining. Though, Michelle does eventually overcome her fears and is able to stand toe to toe with her adversary. Chong, on the other hand, is delightfully unhinged. The character of Linda is all over the place. Sometimes, it seems like she just wants to be friends with Michelle but her actions often say otherwise. Chong toes a fine line between being sympathetic and misunderstood while another side of her is demented and kooky. If you need an example of this, just watch her eerie performance of Lisa Loeb’s “Stay (I Missed You)” and that’s about all you’ll need.

One thing that’s quite surprising about Homewrecker is how funny it is. Usually films of this nature don’t go the comedy route but this one is all in. Linda’s teenage-esque naivete makes for some uncomfortable, yet effective, laughs. There’s definitely some deep seated resentment and sadness behind the character in which she tries to relive a better time in her life. Linda forces Michelle into talking about boys, watching Girls Just Want to Have Fun, and playing a Mystery Date-esque board game during their time together. It’s all very off-kilter and the two women tee off on each other as if they’re still in high school at times. Again, Homewrecker is quirky, weird, and very uncomfortable. There’s also an innocent quality to it that makes all the absurdity that much more amusing. It feels sort of like Rian Johnson’s Brick as serious issues play out with a goofy adolescent tone counteracting them.

Keeping in tone with this satisfyingly juvenile atmosphere, is the film’s overall look and feel. When it comes to these technical qualities, Homewrecker isn’t like other films about obsession. The cinematography from Delaney Siren is bright and colorful as is the set design and costuming. Chong herself is credited with the art direction on the film as well. The colors on Linda’s outfits pop and, once again, play into that childlike innocence the character often possesses. Director Zach Gayne consistently finds interesting ways to present the story and characters with the camera. He often uses split screens and alternate angles in many scenes that give the film some additional quirkiness. The music from Doug Martsch is also a highlight.  Martsch does his best Angelo Badalamenti Twin Peaks impression with effect driven guitar providing a soft, hypnotic tune throughout. There are so many clashes of styles but, somehow, Gayne, his cast, and crew somehow seem to make everything work to near perfection. 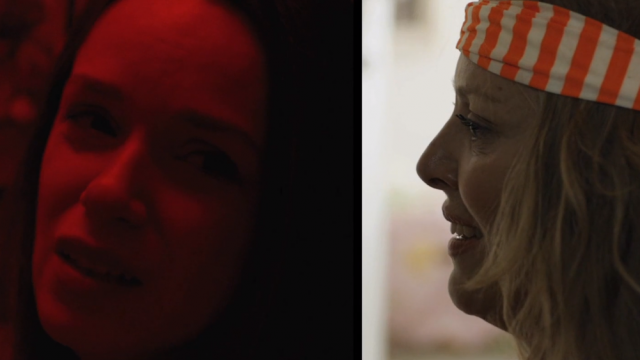 There are a few negatives of the film but they’re quite minor in nature. There are some limited special effects that call attention to Homewrecker‘s small budget. The rest of the film never feels cheap or lacking in resources so these few moments are a bit jarring. Additionally, the “fight scenes” sometimes don’t feel genuine. It’s understandable as these two ladies obviously don’t want to hurt one another but then there should’ve been some workaround to make the scenes feel less stagy. The other detractor of Homewrecker is that it’s a little predictable. It’s easy to guess what the motivations are pretty early into the film but it’s hard to say that they aren’t the way to go in this case. Perhaps some earlier subtlety could’ve masked the film’s twist a little more though.

Minor nitpicks aside, there’s a whole lot to like about Homewrecker. “Quirky” and “weird” are probably the two best adjectives to describe the film as a whole with “funny” coming to mind after that. None of these should be considered bad as they’re what make Homewrecker such an enjoyable experience. The performances from both Alex Essoe and Precious Chong are pitch perfect and will make you squirm during the film’s more disturbing sequences (i.e. Chong’s solo performance of “Stay.”) If you’re a fan of these obsession-based flicks, horror-comedies, or anything in between, Homewrecker is more than worth your time. It may be the funniest, and most disturbing, way you can spend 76 minutes of your time.

*Homewrecker is currently for rent or purchase on video-on-demand platforms like Amazon, Google Play, Vudu, and YouTube. Check out the red band trailer below.*