Teen suicide is a tricky subject to navigate in film. Not only is it extremely touchy but, if done improperly, it can seem exploitative and glorified. This is a topic that we previously explored in our wrap-ups of both seasons of Netflix’s 13 Reasons Why. Whereas the first season bumbled around while trying to convey its overall message, the second season failed miserably at every conceivable message and undid all of its goodwill. Luckily, there’s an alternative as Matt Walting’s debut film, Just Say Goodbye, officially releases on Amazon Prime, DVD, and other video-on-demand outlets today.

Just Say Goodbye is a micro budget feature funded mostly by a successful GoFundMe campaign. The campaign raised $9,790 with a goal of just $9,000. Director Matt Walting was only 16 at the time of filming which is outrageous in itself given the film’s professional feel and, of course, its subject matter. The film has achieved some success prior to today’s release as it has been an official selection for a number of film festivals. Walting even nabbed the Indie Spirit Best Director Award at the Boston International Film Festival last year.

The film centers on Jesse Peterson (Max MacKenzie), a teenager whose life is full of misfortune and bullying. Jesse’s mother passes away from an overdose when he’s a child and her death emotionally (and somehow physically) cripples his father, Rick (William Galatis). Jesse’s lone supporter is his friend, Sarah (Katerina Eichenberger), who’s planning a trip to New York City with her father. As Rick mistreats his son and the high school bully, Chase (Jesse Walters), continues to make his life a living hell, Jesse intends to commit suicide on his birthday while Sarah is away. After relaying his plan to her, Sarah makes every effort to convince Jesse that life is valuable and worth living. 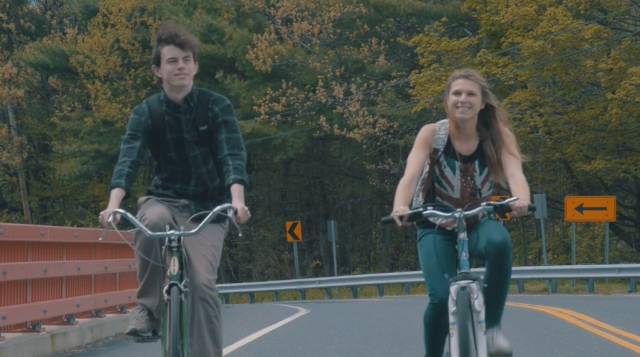 Before delving into more detail, it must be stated that the scope of this tiny film is quite bold. Frankly, Just Say Goodbye is probably more along the lines of what 13 Reasons Why wanted to be as opposed to what it ended up being. The direction from a talented young teenager in Walting gives the film a unique identity and a realness to it. The issues that Jesse goes through are easily relatable to anyone that has gone through the traditional high school experience. Again, the film tackles these ideas much better than the aforementioned 13 Reasons Why which often relied on petty nonsense for its main character’s fateful decision.

The characters in the film are a big reason that the film achieves its goals. Max MacKenzie as Jesse plays a convincing victim of circumstance with his quiet and hapless performance. His non-confrontational ways prove to be a lightning rod for oppression from both his father and the school bullies. When Jesse does finally lash out as he comes to a breaking point, it makes for some of the film’s most memorable scenes. William Galatis gives a no nonsense performance as Jesse’s drunken and broken down father. He’s understandably unlikable for much of the film but there’s emotional depth to his character that shines at times too. Katerina Eichenberger is probably the standout of Just Say Goodbye with her supportive, yet somewhat naggy, portrayal of Sarah. Her character runs through a series of emotions when plagued with Jesse’s plan. She conveys anger, misunderstanding, desperation, and sadness as she pleads with Jesse to go on living.

For such a young and inexperienced filmmaker, tackling a feature length film is a huge undertaking. However, Matt Walting handles the daunting task very well. For the most part, Just Say Goodbye is very technically sound and looks great. It has the look and feel of an independent film with its great camerawork and simple, yet visually appealing, locations. There’s a cool and stark aesthetic to the film that’s reminiscent of something like Rian Johnson’s 2005 film, Brick. Unfortunately though, the audio leaves something to be desired. There’s quite a bit of echo during some scenes and it sounds a little blown out at times as well. Some of this could be from the film’s upload but not all. 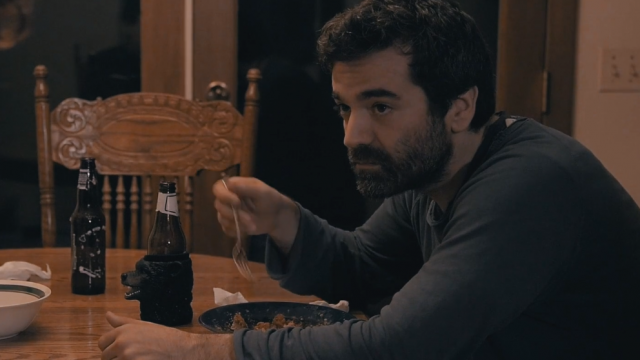 Now, we come to the biggest issue with Just Say Goodbye. Jesse’s ongoing torment can be a little overblown and unwarranted in some instances throughout the film. While bullying is certainly a real thing, the characters often feel like stereotypes or generalizations as opposed to being fully fleshed out characters with a reason for their attacks on Jesse’s person. Jesse’s dad, Rick, especially has moments of complete foolishness that make him feel like a caricature instead of the damaged father he’s meant to portray. The same can be said of Jesse Walters’ character of Chase as he feels like someone playing a bully and not someone who actually is a bully. Yet, screenwriter Layla O’Shea does a commendable job keeping the film’s story on track during these moments. There’s rarely a time when the film loses sight of its inevitable destination. The lone exception is a strange subplot that doesn’t end up going anywhere.

Though Just Say Goodbye leaves room for some improvement, it’s an impressive piece of no-budget independent cinema. There’s a definite vision here shared by Walting, O’Shea, and the rest of the cast and crew. Teen suicide awareness and prevention is always at the forefront of every scene and, as a viewer, you understand the viewpoints of the film’s characters for better or for worse. As with other stories about suicide, the characters’ issues can be frivolous and that’s sometimes the case in this film. However, the care and effort taken by all involved tends to overshadow some of these shortcomings. Ultimately, it’s a relief to see a humble film like Just Say Goodbye embrace a serious and pleading take on the topic. It’s not a masterpiece but it’s a very strong launching point for a young and talented cast and crew that should have much success ahead of them.

*Just Say Goodbye is available to watch now on Amazon Prime or for purchase on DVD here. Check out the trailer for the film below.*