Earlier this year, we took a look at writer/director Don Swanson’s short film, Occurrence at Mills Creek. The film was basically a teaser as it was intended to be the first act of a planned feature length version. At the time, it was difficult to give a proper rating to the short as it was packed full of intrigue but felt somewhat incomplete which, given Swanson’s plan for the film, made total sense. Regardless, we were excited to see where the filmmaker was set to take us in an extended cut of this story. Now, we’ve seen the feature film version of Occurrence at Mills Creek and it remains consistent in providing a ton of thought-provoking scenes and spooky imagery. However, the film also left us a little lukewarm on the full experience as it too often strays from what makes it so compelling.

The film follows Clara Coulder (Ava Psoras), a young woman who suffers through a string of tragic deaths in her family. First, Clara and her sister, Cassandra (Alexa Mechling), mourn the death of their mother, Emily (Betsy Lynn George), before Cassandra then mysteriously passes away. Clara briefly reunites with her father, Victor (Joe Fishel), following her sister’s death but he soon meets his end as well. Unable to cope with her own guilt, Clara tries to commit suicide but is spared. Her only means of support comes in the form of her friend, Anna (Carley Ward), and her distant aunt, Cecilia (Mary Sack). As the film continues, a dark family history is revealed as Clara struggles to understand the numerous tragedies left in her wake.

Before we delve further into the feature length version of Occurrence at Mills Creek, it should be stated that the first 17 minutes or so is more or less a retread of the short film. Some scenes have been moved around but, for the most part, the tone and overall horror vibe is left intact in the first act of the feature version. That being said, we’re not going to spend much time repeating things we’ve already mentioned in our short film review from earlier this year. We encourage you to go back and check that out for some initial thoughts if need be. There’s still a nonlinear approach chronicling all the recent events that have plagued Clara’s life before giving way to the more linear middle portion of the film. The themes of jealousy, death, and the supernatural are still prevalent in the reassembled cut here and everything functions very closely to the short. 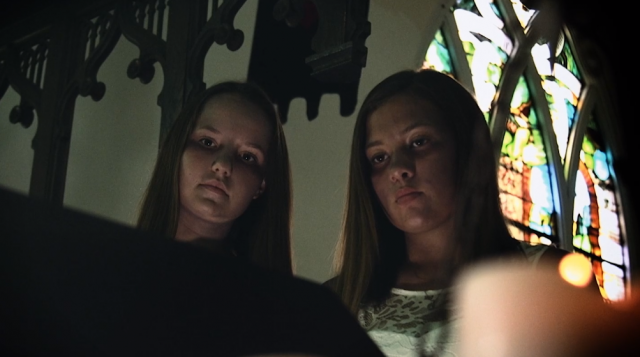 Surprisingly, the one thing we didn’t touch on in our previous review was the look and feel of Occurrence at Mills Creek. Swanson, who also handles the editing, cinematography, color grading, and effects work on the film, has a wonderful vision for the film aesthetically. It feels reminiscent to horror films from the 1970’s like Black Christmas or Alice, Sweet Alice. That’s not to say that these films are similar in substance to Swanson’s but there’s a similar appeal with the grainy film quality, slow pacing, and uncomfortable feel. Similar to Jeff Wedding’s Tennessee Gothic, another slice of recent indie cinema, Occurrence at Mills Creek just doesn’t feel like modern horror. There’s a timeless quality to it despite some minor uses of technology. Swanson’s eye for interesting and visually pleasing shots will have you not wanting to look away and it feels like there’s always something going on in the background. The specters of Clara’s past continuously haunt her every move and make the film all the more eerie as well.

In contrast to the excellent visuals is the sometimes irritating music. It’s a shame because there’s actually a very moody and emotional original score from composer Mark D’Errico that, again, has a sort of 70’s vibe to it. There’s also a hint of Angelo Badalamenti’s work on Twin Peaks in there as well. No, the problem with the music is in the usage of songs throughout the film. There’s nothing necessarily wrong with the songs themselves but the audio is mixed so loud that it often drowns out dialogue. It’s almost as if the songs are meant to be featured as opposed to what’s actually happening onscreen at the time. Admittedly, there are some pretty cool tunes, especially those from Mia Zanotti, a former contestant on Season 8 of The Voice, who also makes an appearance in the film. Though, the way they’re spotlighted in Occurrence at Mills Creek can be annoying when you’re struggling to hear what the characters are saying over them. Of course, the songs themselves aren’t at fault for this but this issue warrants mentioning here. 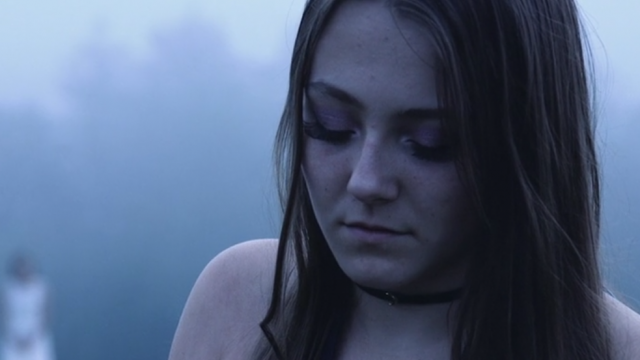 The thing that really hurts the film overall though is its inconsistent tone. Upon initial viewing, Occurrence at Mills Creek is a drama bookended by a more attractive horror story. In our previous review of the short film, we talked about the cerebral horror approach and the weight of Clara’s crippling guilt being its source. This is only part of the story as the second act of the film has her muddling around as she isolates herself from others. Yet, this part of the story feels devoid of any real impact. When looking back on the film, it’s the beginning and ending that will have viewers coming back. Despite feeling a bit incomplete, the short built the film up as a complete psychological breakdown of a troubled young woman. The feature length version only does this sometimes. Again, the beginning and ending feel consistent while the lengthy middle section feels like something different. The film is at its best when it sticks to being horror as the drama portions leave something to be desired.

Regardless, Occurrence at Mills Creek still comes with a recommendation. It gets a bit long in the tooth in the second act but the first and third acts boast that certain ghastly intrigue that so many great psychological horror films do. Writer/director Don Swanson has a vision for the film but it just feels slightly obscured as the runtime is padded out to its 84 minute runtime. The good news, though, is that you actually want to spend more time with these characters and this story. The potential family curse isn’t as fleshed out as one could hope but there’s definitely something there. Had the film spent a little more time establishing inciting incidents with all of the mysterious deaths, the middle could’ve had some more action, and the overall horror vibe could’ve remained consistent throughout. As it stands, Occurrence at Mills Creek is a film that will frequently pique interest but you may have to do a little bit of waiting in between.

*Occurrence at Mills Creek recently had its official premiere on September 12th while the original short film is currently available to stream on Amazon Prime. Check out the trailer for the feature length version below.*