With so many independent feature films being relatively small in scope, you have to take notice when one takes on a larger scale. Whether its location, a small cast and crew, or storytelling, many indie productions don’t try to function outside their means. This is why a film like Peter Bishai’s Rapid Eye Movement is impressive. It’s an indie feature that feels like a big budget one given its talent and backdrop. While the film isn’t perfect and some of its boldness backfires at times, it’s a commendable piece of indie cinema that isn’t afraid to shoot for the stars.

The film centers on a radio personality named Rick Weider (François Arnaud). His wife, Kathy (Chloe Brooks) pleads with him to help fix their marriage by going on a retreat but Rick doesn’t give her the time of day. On the verge of losing his wife and his time slot due to declining ratings because of his eclectic musical tastes, Rick plans a stunt to keep his job instead. He schedules a wake-a-thon to be broadcast live in the middle of Times Square. Here, he’s looking to raise money for a cure for the childhood disease, spinal muscular atrophy or SMA. Unfortunately for Rick, a deranged caller keeps contacting him threatening to kill him if he falls asleep or doesn’t meet a $5 million goal.

The plot is probably the biggest issue when it comes to Rapid Eye Movement. Throughout the film, it just doesn’t seem to ramp up very much. The whole wake-a-thon is designed around Rick trying to keep his job by breaking the eleven day world record for sleep deprivation. Then, there’s the story about the killer but you never fully understand why he threatens to kill Rick. It has to do with SMA but, again, the film never delivers a full explanation. The side story of Rick alienating his wife does have some weight but it’s often in the background instead of the forefront. On paper, the story seems interesting but, in execution, it leaves something to be desired. Also, the story is told day by day but there’s nothing really distinct about any of the days. Films like The Ring have used this structure but you can usually remember events from specific days. 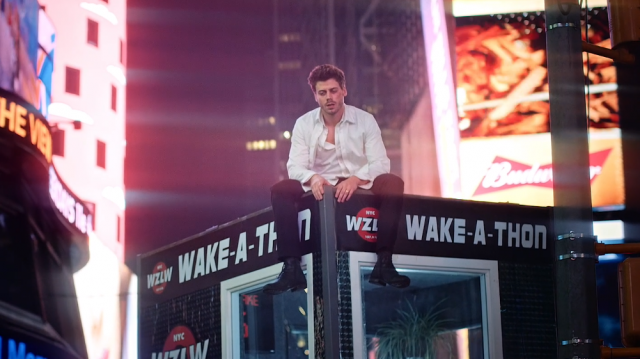 The film also suffers from a bit of an identity crisis. There are many times throughout the film where it’s trying to be humorous. Then, the next scene may be a dramatic interaction between Rick and his wife. All of this occurs while a caller is threatening to kill Rick. There are just too many different story arcs happening and they all feel like they’re from different films. The main comparison you’ll make is certainly to 2002’s Phone Booth where the lead character, played by Colin Farrell, is stuck on a pay phone with a killer who won’t let him leave. For the most part, Rapid Eye Movement is very similar. Yet, it lacks the intensity and thrills that Phone Booth is most known for. It also has the lightheartedness as well as the drama that keep the film from feeling like one cohesive experience.

Luckily, there’s actually a lot of good in the film outside of its shaky execution. The first thing most people will notice is how amazing the film looks. The cinematography, camerawork, and editing is excellent. There’s an almost dreamlike quality with the bright neon lights of Times Square always glowing in the background of Rick’s broadcast booth. As crazy as it may seem, the film actually was shot in Times Square. With independent productions, you’d expect sets and CGI trickery to double for the popular location but that’s not the case with Rapid Eye Movement. In this case, the real location gives a lot of life to the film and it does make up for some of the lackluster story. That being said, there are some cheap CGI effects in the film. Though, they seem intentional as they always occur during Rick’s hallucinations from sleep deprivation. Intentional or not, they work just fine in the context of the film. 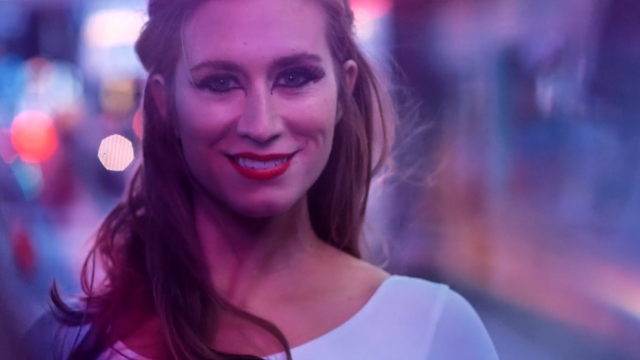 Certainly, the best thing about Rapid Eye Movement is its cast. François Arnaud as leading man Rick is great. There’s a complexity to the character with his cocky attitude, disregard for those closest to him, and still a desire to do good. As the film progresses, you see Rick bottoming out due to his lack of sleep and Arnaud plays this very well. His facial expressions are great and he legitimately looks like someone who has been awake far too long. The rest of the cast is also littered with unique personalities that probably should’ve been given more to do overall. Reiko Aylesworth as Rick’s producer, Charlene, is one of the most used characters but you never get to learn too much about her. The same can be said for Charlotte Sweiger’s Teresa Deans. Teresa seems to be infatuated with Rick but you don’t get much insight into their relationship or what her feelings are for him. It’s unfortunate because these characters, along with Chloe Brooks as Kathy, are interesting and recognizable but the film just doesn’t have much of a place for them.

Overall, Rapid Eye Movement is a bit of a mixed bag. It’s definitely not bad or poorly made. Actually, it has all the makings of a really good thriller. Yet, it seems that if writer/director Peter Bishai and company maybe tried to be a little too bold. Rick’s wake-a-thon, sleep deprivation, paranoia, and the burden of his relationships were probably enough to make a feature. Sadly, the killer storyline feels a bit unnecessary and it’s still inexcusable that the film never delves into the killer’s side of things. While Rapid Eye Movement isn’t going to wow you with its storytelling, the film’s aesthetics, characters, and popular location warrant it a watch.

*Rapid Eye Movement is available to rent or purchase on video-on-demand services like Amazon, Google Play, and YouTube.*