Since the release of Mary Shelley’s 1818 novel, Frankenstein; or, the Modern Prometheus, both the scientist Frankenstein (whether Victor or Henry) and his monstrous creation have become horror icons. This has obviously been the case in cinema as the Frankenstein story has been told countless times over the years. Back in our 31 Days of Horror feature this October, we even discussed this in our daily entry on James Whale’s 1931 adaptation of Frankenstein. While Whale’s masterpiece stands as arguably the best take on the story and characters, writer/director Donald F. Glut puts together something fun and unique, though admittedly low budget, for the 200th anniversary of Shelley’s original novel. Though 2018’s Tales of Frankenstein doesn’t come anywhere near the quality of some of the best interpretations of Shelley’s work, it’s still an entertaining and different kind of watch that’s worth checking out for fans of the classic tale.

Tales of Frankenstein is an anthology style film that adapts four short stories from Glut’s book of the same name. The first sees Dr. Gregore Frankenstein (Buddy Daniels Friedman), a distant cousin of Victor, creating his own monster to reclaim the Frankenstein name and provide a new lease on life for his lady love, Irma (voiced by Monique Marissa Lukens). Next, there’s a mystery regarding a red ruby ring owned by Lenore Frankenstein (Tatiana DeKhtyar) that summons a disembodied hand to exact its revenge. Then, in 1948 Los Angeles, detective Jack Anvil (Jamisin Matthews) stumbles upon his own house of horrors led by the unhinged Dr. Mortality (Mel Novak). Finally, we have a twist on the classic Frankenstein tale with Dr. Heinrich Karnstein (Jim Tavaré) recruiting a young assistant, Carl (Justin Hoffmeister), and setting up shop in Transylvania to create a new type of monster.

While none of the shorts act as a direct adaptation of Shelley’s story, they all boast aspects of it and/or provide an interesting spin on the source material. Obviously, most of them have to do with some kind of descendant or offshoot character trying to make their own monster in an attempt to honor the family name to varying results. The theme of playing God definitely has a place in Glut’s film but some of the stories take on a more romantic side and some a more sinister approach. Even though Frankenstein is a monster story, fame, glory, love, horror, and tragedy all have their place with each idea being represented in Glut’s Tales of Frankenstein as well. 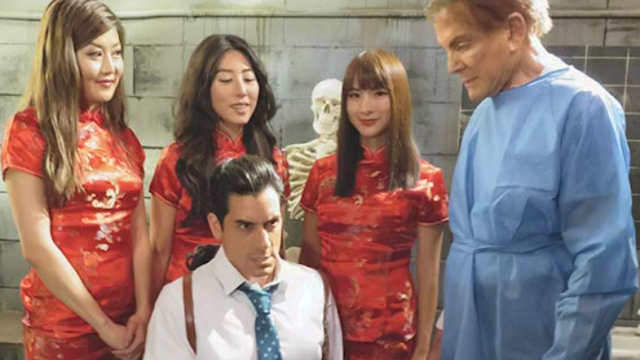 The anthology style is a good way to go as it keeps the film from getting stale and the stories are just different enough to not feel like the film is repeating itself. Each segment takes place in a different location and time period such as present day Bavaria, 1910 Switzerland, 1948 Los Angeles, and 1957 Transylvania with each featuring a different version of Dr. Frankenstein. To compare, Buddy Daniels Friedman’s Gregore is a more sympathetic take while someone like Mel Novak’s Dr. Mortality is obviously a more vile and demented side of the often shunned doctor. The film feels reminiscent of other anthology flicks like Creepshow and Tales From the Darkside as the segments aren’t always necessarily horror with a fair share of comedy splashed in, but there’s a consistent tone and flow that brings cohesion to the overall project.

Now, that’s not to say that there aren’t any horror aspects to Tales of Frankenstein either. While the film may not be “scary,” it doesn’t shy away from the spectacle and violence that horror fans have come to know and love. As previously mentioned, the film is low budget so you shouldn’t expect amazing gore or creature effects but what is here is effective in its own right. There’s plenty of killing and cold-blooded murder to go around as each offshoot of Dr. Frankenstein work to achieve their goals. The death scenes aren’t overly brutal but are shot well so that viewers won’t be taken out of the film. The monsters themselves are usually done relatively well but do vary a bit in terms of effects. In the opening segment, “My Creation, My Beloved,” Gregore’s creation is pretty simple but certainly works for that specific love story version of Frankenstein. Then, there’s something like Dr. Karnstein’s monster that shows off some of the film’s most impressive creature effects with a more ghastly design. 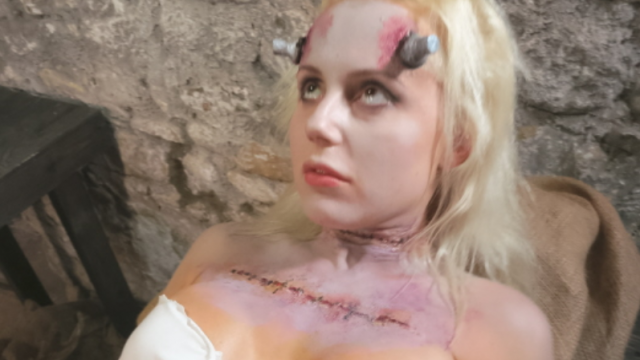 Now, we have to state that Tales of Frankenstein isn’t going to turn anyone onto Mary Shelley’s original novel, the 1931 film, or any other well-renowned interpretation of the tale. Glut’s film is more of an homage and love letter to it that fans of Frankenstein should be able to appreciate. The film is basically a collection of short films paying tribute rather than being a uniquely original take on the source material. Again, Tales of Frankenstein is admittedly low budget so no one should expect to be blown away by it. There are some iffy CGI effects at work especially on the disembodied hand in the second story, “Crawler From the Grave.” However, there’s definitely an appeal to the film that should satisfy both classic horror lovers and B-movie fans.

It should be no surprise that Tales of Frankenstein won’t be considered a classic in the horror genre but that doesn’t mean that it doesn’t have merit. Donald F. Glut’s appreciation of Mary Shelley’s story and the work of all the Frankenstein filmmakers that came before him is evident. What Glut seems to aim for with his film is fun. Tales of Frankenstein is a fun take on an oft-adapted tale that allows him to work outside of what most already know about Dr. Frankenstein and his horrific creation. Frankly, the possibilities with this approach are endless and if Glut wanted to make a sequel anthology, he could easily do so. Crafted in the vein of films like Creepshow, Tales From the Dark Side, and Trick ‘r Treat, Tales of Frankenstein is an entertaining and commendable spin on a timeless horror story. With its effectively charming B-movie feel, Frankenstein fans should give this one a look.

*Tales of Frankenstein is currently streaming for free on Amazon for Prime members. Check out the trailer below.*