For the second time in as many days, we’re getting into that “not for everybody” territory. Sometimes there are films that know full well they’re not for mass audiences. However, they’re very well done and have a special something that certain people will like. Surrealist icon David Lynch has pretty much chiseled out his entire career based on being weirder than the norm and has influenced a generation of filmmakers with his work. Writer/director Patrick Picard certainly channels his inner Lynch with his debut feature, The Bloodhound, streaming exclusively on Arrow Video. Capturing the anxiety riddled thrills of Lynch’s work, The Bloodhound manages to command attention despite not offering up as much explanation as it maybe could have.

The film sees old friends reunite as Francis (Liam Aiken) visits the wealthy and reclusive Jean Paul Luret AKA JP (Joe Adler). JP’s father has recently passed away and his sister, Vivian (Annalise Basso), is a shut-in who JP shields from any outsiders including Francis. Despite all the money in the world and everything he could want, JP craves human interaction in between health scares and private performances of various sorts. Francis, who’s somewhat strapped for cash, endures JP’s strangeness while also being tormented by things that go bump in the night. Francis receives eerie visits from Vivian in the middle of the night along with the haunting presence of a humanoid creature with a burlap sack over its head dubbed the Bloodhound.

If this sounds weird, it’s because it is. The Bloodhound is a very weird film but not a bad one. There’s a lot of questions and mystery surrounding the plot and its characters. You’ll find yourself wondering what exactly happened to the Luret family to make them all so unhinged and why would Francis, a seemingly normal individual, be willing to cope with all the eccentricities during his stay. Who or what is the Bloodhound and why does it spend its nights crawling back and forth between the river and Francis’s closet? Again, there are just so many questions and, unfortunately for those who like their cinema explained for them, don’t expect to get most of the answers you seek here. 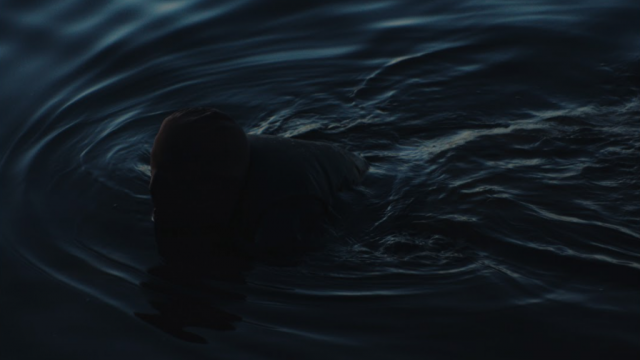 What viewers do get, though, is a batch of unforgettable characters. While it’s true that Picard doesn’t really let you in on all the dark secrets between them, the small, but talented, cast makes up for it. Liam Aiken’s Francis is the character that the audience is meant to identify with and Aiken does a good job in this regard. Although most people would’ve ran screaming out of JP’s house after night one, Aiken’s Francis maintains a sort of morbid curiosity. Like the audience, Francis is out to discover what’s going on despite the nightly warnings from Vivian. Speaking of which, Annalise Basso definitely deserved some more time as Vivian. As possibly the most intriguing mystery in the film, it feels like there isn’t a ton of payoff for her character by the end despite Basso being solid in her limited screen time. Joe Adler is the biggest standout of the film as the enigmatic JP. You just never seem to know what he’s thinking or what his intentions are. It’s hard to get any kind of read on the character as to whether he’s just a victim of circumstance or if he’s the figurehead of this bizarre house of horrors that he’s confined to. Adler gives a very strange performance and, in terms of The Bloodhound, that’s exactly what was needed.

Coupled with the strangeness of the cast is the weirdly hypnotic atmosphere that Picard creates in his debut feature. Every interaction between JP and Francis is stilted and awkward and yet there’s a sort of comfort between the two. At times, tempers flare between the two but they always seem to even out shortly after. Then, there’s the house itself. It has a modernly elegant, but not overly fancy, look to it. The environment feels sterile but also lived in. Even though everything’s easily recognizable, there seems to be an otherworldly aura to the house. It’s kind of hard to explain but there seems to be a type of haze that hangs around in every scene. Perhaps the inhabitants of the house don’t really choose to be stuck there but are somehow drawn to it instead. Again, there are a lot of questions that will cross your mind during The Bloodhound but you’ll receive very few answers. 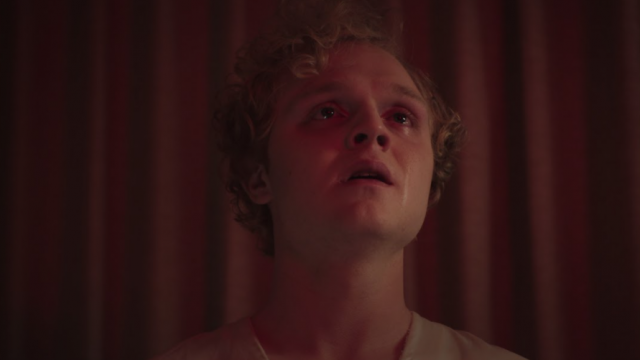 This is also the biggest detractor with The Bloodhound. With all of the buildup and suspense across the film’s brief 72 minutes, there just doesn’t seem to be enough here to fully satisfy. There are some long sequences where you expect the story to really pick up and then it just returns to a deliberate pacing. Every time emotions start to run high, they’re immediately brought back down in the next scene. The film is very reminiscent of David Lynch work like Twin Peaks and Lost Highway without some of the wild payoff that those titles have to offer. It’s unsurprising that Adler actually had a role in Lynch’s Twin Peaks revival back in 2017 as the character of JP feels like something straight out of that world. When it comes to The Bloodhound, there’s a very bleak and compelling final message but, overall, it feels like there could’ve been a little more here as well.

Because of this, the film is a very hard one to recommend to casual film fans but, for those who enjoy the surreal, The Bloodhound could be the film for you. Fans of David Lynch should certainly go ahead and check this one out because it certainly has an appeal. The tense buildup is undeniably fascinating at times and viewers are going to want to know more about these characters and this uncanny world that Picard has built. The unfortunate part of this is that viewers aren’t always allowed to know more. In a way, you simply have to take things at face value and get lost in the weirdness of it all instead of understanding why it’s weird. Ultimately, The Bloodhound needs to be judged on a per-case basis. Some are sure to love it while the more casual audience may not be able to get into it.

*The Bloodhound is currently available for streaming on Arrow Video’s monthly subscription service. Check out the trailer below.*