Over the past few years, filmmaker Miles Doleac has been no slouch in terms of putting out content. Along with landing minor acting gigs in titles like American Horror Story, The Magnificent Seven, and HBO’s Watchmen, Doleac has been pumping out new films at an insane rate. Since the release of his feature length debut, The Historian in 2014, he has written and directed four additional features and a handful of short films as well. For his newest feature, Doleac returns to the horror genre once again after releasing Demons in 2017 and Hallowed Ground last year. Though a bit tepid at the start, The Dinner Party crescendos into a wild tale of bloody rituals and violent pasts as a couple seek to break bread with the societal elite.

The film opens with married couple Jeff (Mike Mayhall) and Haley Duncan (Alli Hart) arriving at the luxurious home of renowned surgeon and culinary enthusiast Carmine Braun (Bill Sage). Jeff is a playwright who aims to make an impression at the party as his newest work is to be funded by Carmine and his guests. Among the dinner guests is the mystical sage-like Sadie (Lindsay Anne Williams), aristocratic smooth talker Vincent (Doleac), carnal author Agatha (Kamille McCuin), and the opera loving Sebastian (Sawandi Wilson). As the party commences, it appears that maybe Carmine and the others aren’t as interested in Jeff’s plays as once thought. Instead, they seem to have more sinister intentions in mind for the couple as the evening continues.

To avoid spoiler territory, much about the plot will be kept vague but most genre fans can expect what happens next. After all, this is a horror movie. Though, for almost the entire first hour of the film, it doesn’t feel like one. While it’s true that Doleac does build some creepy atmosphere with the museum-like house and off-kilter personalities within it, there’s not much else to latch onto in the film’s first half. If you’re a horror fan looking for constant thrills, The Dinner Party likely won’t do it for you. Here, the pacing is deliberate to a fault as you’ll find yourself frequently checking the time as characters drone on and on. It’s sometimes hard to pay attention just because you wish something more was happening. 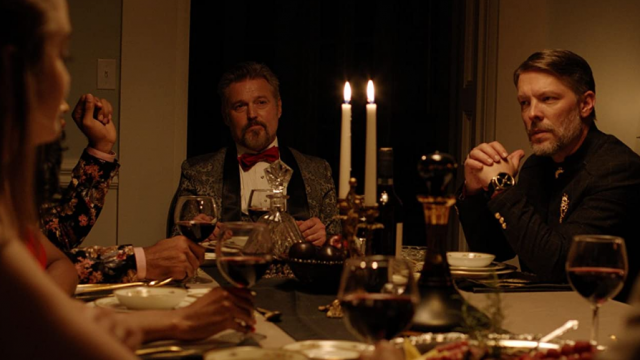 Luckily though, things do happen and, once they start, there’s no going back. For as tedious as the first half of the film can be, the second half is full of intrigue and more of the things horror fans love about the genre. There’s plenty of blood, gore, and the macabre to disturb longtime genre fans and reinvest them into the sometimes meandering story. Everyone involved on the effects team deserves praise for their work on The Dinner Party as all of the effects are extremely well done. There’s probably only one scene where some obvious CGI is used for dramatic effect around the halfway point and even that is done pretty well. As the turning point of the film, it snags your attention and leaves you craving for what’s next to come. When the film kicks into gear, it’s almost like a mix of Rob Zombie’s House of 1000 Corpses and last year’s surprise horror hit, Ready or Not.

Coupled with the solid effects work is some wonderful cinematography. The house and its lavish rooms never feel like film sets. It feels elegant, yet lived in, and the warm hue of the film is inviting for viewers. This also helps to maintain some semblance of logic for the characters of Jeff and Haley. The house isn’t some huge, empty mansion with no inhabitants where they decide to spend the night. They’re treated like guests but the company they currently keep is foreign to them. They aren’t part of the elite. They’re just a normal couple who are hoping they lucked into the chance of a lifetime. Additionally, the costuming is outstanding especially for an indie film. Lindsay Anne Williams not only plays Sadie but also doubles as the costume designer and does an amazing job. Each of the dinner guests have costumes that feel unique to them and they all pop off the screen in the best way possible. Things like Sebastian’s gold paisley jacket and Haley’s bloodstained yellow dress will be difficult to forget for viewers. 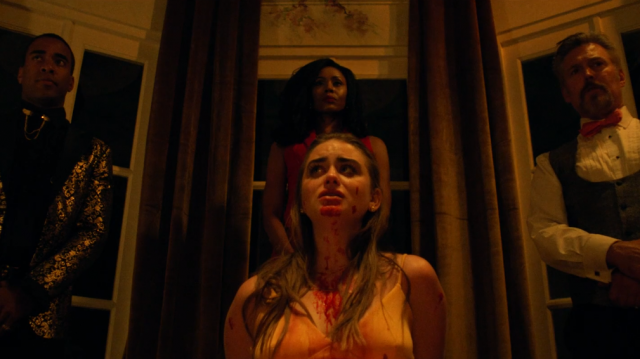 Speaking of being hard to forget, the same can be said for all of the characters in The Dinner Party. They’re what help you soldier through some of the film’s more dull moments and keep you on your toes during its best ones. Every cast member is on their game for this film and each one deserves praise. However, we’re going to focus on the few standouts here. With a personality as gaudy as his jacket, Sawandi Wilson’s Sebastian shines bright in every scene. Whether he’s being difficult, explaining stories from his favorite operas, or satisfying his bloodthirst, he’s arguably the most entertaining character in the entire film. Meanwhile, Miles Doleac also leaves a lasting impression as Vincent. His quiet menace keeps you guessing where his loyalties and intentions lie. Then, there’s Alli Hart as Haley. While not initially the main character, she’s clearly the more relatable between her and Jeff. She’s an emotionally deeper character and refuses to sit idly by as the dinner guests pick her apart. She’s not quite the heroic bad ass like Bruce Campbell’s Ash Williams from The Evil Dead or Samara Weaving’s Grace from Ready or Not but she’s in that same vein.

Due to a very slow and overly long first half, The Dinner Party has to be docked a few points. The second half definitely makes up for some of the boredom in the first though. All of the characters are unique and you legitimately would like to learn more about them. They keep you invested in a story-less and drab hour long first act which is impressive to say the least. It’s in the film’s second half where things really pick up and viewers will be excited to see what kind of sick and twisted events lie ahead. Though The Dinner Party isn’t the easiest watch for horror fans, those that stick with it will likely be satisfied by the blood splattered final product.

*The Dinner Party is currently available for rent or purchase on video-on-demand platforms like Amazon, Youtube, Google Play, and Vudu. Check out the trailer below.*