One of the great things about independent filmmaking is being able to see some less than typical locations being featured prominently onscreen. With cities like Atlanta and Kansas City stealing business away from the usual Hollywood and New York City locales, we’re living in a much more diverse time when it comes to setting. Given the access to more affordable and quality technology to indie filmmakers these days, it only makes sense that smaller cities would also want to reap some of the rewards. For his debut feature, Union Bridge, writer/director Brian Levin effectively spotlights a small Maryland town even though the film’s story leaves something to be desired.

The film focuses on a young man named Will Shipe (Scott Friend) as he returns to his hometown of Union Bridge, Maryland, after running a bit too hard in the big city. Will, whose family business is a staple in the community, is welcomed upon his return but he soon begins hanging out with an unsavory crowd much to the chagrin of his mother, Jeanie (Elisabeth Noone). His old friend, Nick Taylor (Alex Breaux), becomes obsessed with digging for a lost treasure while Nick’s cousin, Mary Burke (Emma Duncan), turns to particular religious practices for guidance. Meanwhile, Will is plagued by some cryptic dreams that seem to be related to Nick’s actions. It seems that maybe Will’s hometown has some secrets that are aching to be uncovered.

Categorized as a southern gothic thriller, it’s hard to categorize Union Bridge as the latter two descriptors. Other than some confusing ancestral flashback scenes, there’s nothing that can really be described as gothic. Additionally, there aren’t a whole lot of thrills throughout the film either. There’s a little turmoil between characters like Will and his mother along with Nick against seemingly everyone he encounters. The ancestor characters seem to frequently be at odds with one another as well. Though, it’s hard to say that any of these relationships or events between them are especially thrilling. For the most part, the story simply focuses on Will’s return and how he interacts with the people he had previously left behind. 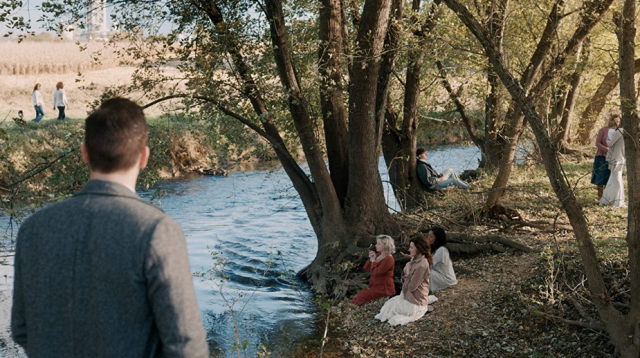 While the plot may seem like a potential mystery/thriller in print, there really isn’t much going on for most of the film’s runtime. Because of this, Union Bridge feels painfully long despite a standard 90 minute runtime. Again, there are a lot of scenes that basically consist of Will just interacting with others. In a typical three act structure for a feature film, you normally understand the character conflict and motivation by the time you’re seventeen minutes in. You should surely know by the time you’re thirty minutes into a film. With Union Bridge, you’re not really sure what anyone’s motivation for almost the whole film. There’s a lot of wasted time in scenes where Will and Mary inexplicably feed animals or when Will communicates with other townsfolk who don’t seem to have a purpose in the film other than to pad the runtime.

The biggest shame in this is that you may really find yourself wanting to be invested. It boasts some intriguing characters that just don’t get a chance to carry the full load due to the convoluted, yet mostly absent, story. Scott Friend is a fine leading man as the returning hometown boy, Will. There’s an air of mystery to the character as he clearly has past issues that he hasn’t faced. His backstory is kept vague which piques interest in the character but also lacks payoff. Emma Duncan’s Mary is the same as Will’s mother, Jeanie, believes there’s some bad juju surrounding her. Once again though, there’s no real payoff for her character and Duncan comes off rather charming for most of the film. Alex Breaux’s Nick probably has the most complete character arc and he does a great job building the film’s few truly suspenseful moments. Nick is a misunderstood character who the town has chewed up and spit out. As a viewer, you feel for him but also are never too sure of what he’ll do or what’s going through his mind. 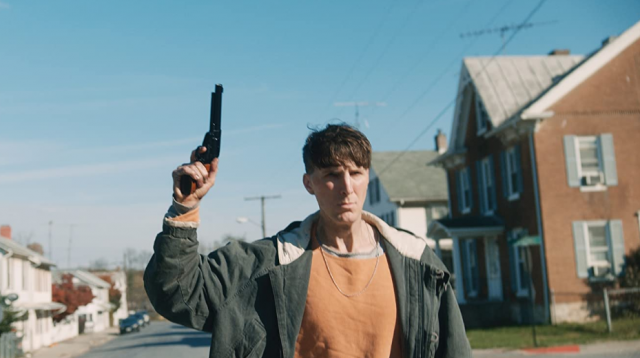 While Levin’s story will mostly have viewers left wanting, his accomplishments as a technical filmmaker should not. Levin puts together a fantastic looking film with the efforts of his Director of Photography Sebastian Slayter not going unnoticed. The small town feel is captured perfectly as viewers are shown small bars and diners, shabby homes, barren farmland, and an industrial oil refinery over the course of the film. The town feels like a place that anyone other than its inhabitants have long forgotten. In this respect, viewers see the town in all its stark beauty as if through Will’s eyes. Even though it’s difficult to get invested in the story being presented, you’ll find yourself fantasizing about all the history and heartache that potentially lies within this little town based on its appearance alone.

There’s something here with Union Bridge but, overall, writer/director Brian Levin just can’t seem to pull it all together into one cohesive narrative. For this story in particular, a short film probably would’ve been a better route to go than stretching it out into a full length feature. Still, it’s hard not to anticipate Levin’s next project given the amount of talent that’s on display in this film. Not only does the film look great and ooze personality but Levin and his cast bring these characters to life despite them not having a whole lot to do at times. While Union Bridge may not be a masterpiece of a debut, it provides a nice foundation to build off of for a talented filmmaker. Levin’s best work feels like it’s still to come.

*Union Bridge is currently available to rent or purchase on video-on-demand platforms like Amazon, Google Play, and YouTube. Check out the trailer below.*