So, if you even sort of follow this site regularly, you’ve probably read, “this film isn’t for everybody,” quite a few times over the course of 2020. After all, what can you really expect in a year that has been mostly devoid of summer blockbusters, fall Oscar contenders, and holiday smash hits? To be frank, the year 2020 isn’t really for everybody either but here we are. That being said, this has not been a bad year for film with so many independent filmmakers and smaller productions filling in the void left by mainstream Hollywood. It’s been somewhat refreshing to watch most of these titles as it feels like they’re actually made by filmmakers with vision as opposed to something simply getting pumped out as an easy cash grab at the box office. If you haven’t guessed by now, Black Bear, the new film from writer/director Lawrence Michael Levine, is another solid 2020 film that “isn’t for everybody” that also provides commentary on gender, public perception, and social niceties.

The film follows Allison (Aubrey Plaza), a filmmaker looking for inspiration, who rents a room at a lake house hideaway. Upon her arrival, Allison strikes up a friendly relationship with Gabe (Christopher Abbott) as the two seem to share a similar worldview. Gabe’s pregnant girlfriend, Blair (Sarah Gadon), is a different story. Her attempts at being nice to Allison are mostly phony and a jealousy quickly develops as the similarities between Gabe and Allison are abundantly clear. Meanwhile, the differences between Blair and Gabe reach a fever pitch. However, that’s when the film throws a curveball and, suddenly, roles are reversed in surprising, yet effective, fashion.

To delve any further into the film’s simple, yet bizarrely complicated, plot would be going into spoiler territory. Obviously, we’re not going to do that here. Before we proceed, just be forewarned that if you don’t like 180 degree plot twists, then Black Bear isn’t going to be a film for you. To be honest, the turn isn’t all that necessary either. The film hits a very intense stride and, although not wholly original, it grabs your attention and doesn’t let go. That is, until it basically starts fresh on you. Yet, it does the same thing again as it re-sparks interest and keeps you hooked until the credits roll. The film isn’t far off from something like, say, David Lynch’s Mulholland Dr. but likely more accessible.  It’s truly a tale of two films but both “parts” do have an overall flow and critique on human interaction. 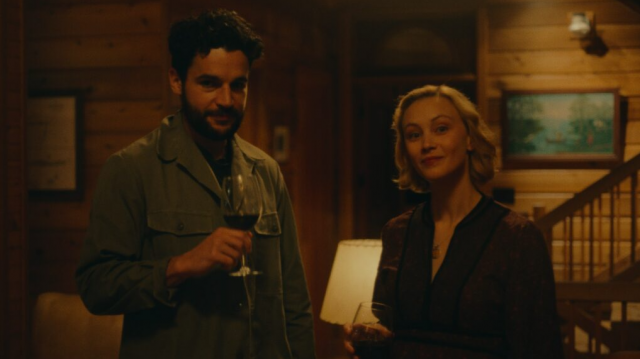 Before getting into the message and commentary of Black Bear, let’s get into the characters. Aubrey Plaza is phenomenal as Allison. She was creepily great in 2017’s Ingrid Goes West and quite good in her turn as Karen Barclay in the satisfactory Child’s Play remake but Plaza is on another level here. She has a lot of tough, carefree attitude when dealing with the drama of her hosts but also perfectly plays a woman scorned in the film’s later moments. Both Christopher Abbott and Sarah Gadon are great as a couple at odds as well. They have the most cringeworthy communication people in a relationship can have where every topic and sentence can spark an argument. Both play their roles so well that viewers will actually be annoyed by their incessant banter because of how recognizable it is from real life. We all know those couples who truly hate each other but are still together for whatever reason and that’s exactly how Abbott and Gadon play Gabe and Blair. The three leads are also tasked with pulling double duty as their roles do change throughout the film. Again, to avoid spoilers, that’s all we’re going to say about that.

Now, we get to the real talking points of the film. Black Bear begins simply enough with Allison meeting the couple from whom she’s renting her room from. There’s an immediate connection between Plaza’s Allison and Abbott’s Gabe as the two discuss Allison’s film career. We soon discover that Gabe identifies as a professional musician despite not having quite the career he’d maybe like. Their struggling artist backgrounds aren’t the only similarities as the two share a pessimistic, but perhaps more realistic, worldview than Gadon’s Blair. The differences between Blair and the other two is obvious from the start. After a exchanging some hollow compliments with Allison, Blair contradicts nearly everything that either Allison or Gabe say. For instance, Blair scoffs at the idea of the breakdown of the nuclear family and the gender roles within being a negative to modern society. Though Gabe tries to frame his argument in a way that isn’t sexist or chauvinistic, Blair argues for women’s rights and the universal “truth” that no woman was happy in their said role within a family. Of course, she does so without ever really trying to understand the point her boyfriend is trying to make. 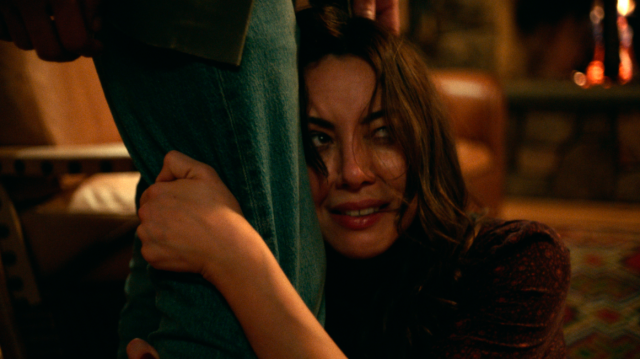 The character of Allison is almost a devil’s advocate type of character and tends to fuel the fire between the feuding couple. This, and many of the other social issues debated throughout Black Bear, is compelling as these are the types of conversations going on in contemporary America today. These are also the problems as most people only focus on two sides of an argument. There’s only black and white with no shades of grey. There isn’t constructive discussion and understanding as opposing opinions often turn into arguments. The film only devolves from there as jealousy, rage, and lust are explored over the course of the film’s runtime which maybe only feed into the generalizations that the characters tend to make. The film’s characters manipulate and emotionally wreck each other time and time again. The scariest thing about the film, though, is how real it feels. These are everyday problems between people and, in many cases, couples and the toxicity of some relationships is simply frightening. As a viewer, you may not wish harm on any of these characters specifically but it’s apparent that they also don’t belong together. They’re all playing their roles as expected but the phoniness and vacuity of their words and actions speak loud.

Lawrence Michael Levine’s Black Bear is a film to discuss in 2020. With a country and world so divided, this is a film that brings said divisiveness back down to a personal level. Essentially, everyone’s problems start at home. If we can’t be real with the people closest to us while also throwing around fake niceties to perfect strangers, what hope does anyone really have of moving forward in life? In addition, the characters in Black Bear can’t even be true to themselves half the time. Another thing that’s really strange is that the film is kind of a comedy as well. The fake relationships and collateral damage type of characters in the film’s second half will often lead to some amusing interactions throughout. While there are plenty of topics to discuss and debate in the film, its real focus seems to be on point of view though. It’s about seeing things from a different perspective and truly putting yourself into someone else’s shoes. Black Bear isn’t here to push an agenda or sway your opinion but it is here to make you see things in a different way.

*Black Bear is currently available for rent or purchase on video-on-demand platforms like Amazon, Google Play, Vudu, and YouTube. Check out the trailer below.*