As this COVID-19 situation extends into April and movie theaters remain shut down, film studios are coming up with new ways to get their titles out to viewers. Films like The Invisible Man, Emma., and The Hunt hit video-on-demand services a few weeks ago. Meanwhile, Eliza Hittman’s critically acclaimed Never Rarely Sometimes Always is set for VOD release this coming Friday. Elsewhere, Disney has been doing things their own way as they’re wont to do. Originally scheduled to hit the Disney+ streaming service in June, the studio decided to release Frozen II early due to the recent outbreak. In what was no doubt a smart move to boost subscribers, Disney had another tough decision to make with their most recent collaboration with Pixar. On March 20th, Disney-Pixar’s Onward hit VOD services in an attempt to recoup some of their box office losses due to the coronavirus.

Unfortunately for Disney and Pixar, Onward had just hit theaters in the United States on March 6th and, frankly, never had much of a shot. The pandemic had begun and moviegoers were already staying away from theaters. The film’s opening weekend fell short of expectations with Pixar’s previous two releases, The Incredibles 2 and Toy Story 4, debuting at well over $100 million each domestically. Even their last original release, 2017’s Coco, opened to over $50 million while Onward topped out at $39.1 million on its debut weekend. To date, the film has grossed only $104 million worldwide against a budget of $175-200 million. However, the film has had some success as a VOD title and is set for early release on Disney+ on April 3rd.

The film follows two elf brothers, Ian (Tom Holland) and Barley Lightfoot (Chris Pratt), in a world inhabited by mythical creatures who have become lazy due to the rise of technology. Magic has become mostly obsolete and all of the creatures go about their now mundane lives as humans do today. On Ian’s 16th birthday, his mother, Laurel (Julia Louis-Dreyfus), gives the brothers a gift from their long deceased father, Wilden. They receive a magical staff that allows them to resurrect their father for one day. Unfortunately though, the magical spell only half works as the Phoenix Gem in the staff disintegrates and Ian is able to conjure only his dad’s legs. This sets Ian and Barley, a known history and role-playing game fan, out on a magical quest to find another Phoenix Gem and fully resurrect their father before their time together is up.

Even though Pixar has never done this type of fantastical before, the plot is pretty familiar given their penchant for family-centric coming-of-age tales. They also interject a lot of road movie qualities into the film as well. Ian and Barley work towards their destination as other characters constantly try to thwart them. During their travels, the characters learn things about one another which make them value their relationship moreso than before. The film doesn’t really have a true antagonist so the road movie approach was probably the best way to go. It also adds a sense of urgency as Ian and Barley are in a race against the clock to see their father one last time. 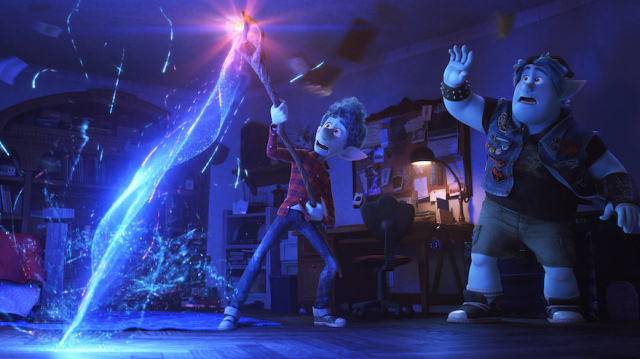 The characters themselves are pretty good overall. Tom Holland’s Ian is a standard protagonist who you feel for given the fact that his father died when Ian was young. He’s also shy and lacks confidence which makes him a bit of a loner at school. Chris Pratt is probably the star as Barley, the lovable, misguided oaf who’s constantly on the lookout for adventure. He has a heart of gold but lacks direction and is an outcast because of it. However, you could argue that the faceless, voiceless pair of legs that make up Wilden give Pratt’s Barley a run for his money. The supporting cast is pretty solid with Julia Louis-Dreyfus as the boys’ mother, Laurel. She’s dating local police officer Colt Bronco (Mel Rodriguez), a bulky centaur, who’s your typical tough guy but complacent in his career. Octavia Spencer voices The Manticore, a lion/bat/scorpion hybrid, who has an important role in the film but doesn’t appear as much as you’d think. Of the three main supporting characters, Rodriguez’s Colt Bronco probably has the most time to shine.

As is always the case with Disney and Pixar, the film looks great. From the very first Toy Story on, Pixar has maintained their signature style and perfected it as time has gone on. The vibrant color scheme and satisfying character models always keep an element of fun in the film. They’ve always excelled at wanting the audience to absorb a relevant message from their films but also have a good time doing it. Like always, Pixar succeeds here with Onward. There’s a lot of visual comedy in the film from Colt Bronco slapping his own backside when he rears up and runs off to the half-resurrected Wilden’s best Weekend at Bernie‘s impression for the majority of the runtime. Basically, it’s everything viewers have come to know and love about the animation studio. 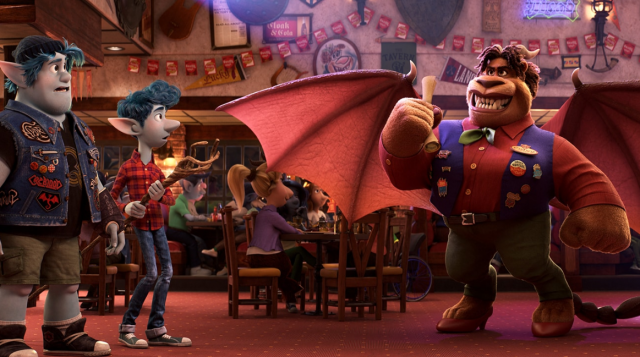 Then, we have the film’s overall message and execution. Previous films like Inside Out and the aforementioned Coco have covered some of this territory prior to Onward and have done so better. In that regard, Onward isn’t necessarily Pixar’s biggest achievement. Still, Pixar has done something over their history that not many animated films have been able to do and that’s relate to audiences at a human level. Even though the characters are cartoons, their emotions and the world around them is created to reflect modern day society. People have become content and comfortable with having everything at their fingertips. There’s no need to go out and learn how to do something because there’s some kind of technology that can do it better with far less effort. Ian and Barley live this way until they realize that they only have 24 hours to spend with their father before the moment is gone.

Ultimately, Onward is another perfectly fine film from Disney and Pixar. We’ve said it before on this site that Pixar doesn’t make bad films and that remains true here. Yet, it does lack the magic of some of their biggest accomplishments. Again, films like the Toy Story series, Inside Out, and Coco just have that little bit extra that this film seems to be missing. It probably doesn’t help that Shrek exists as that film goes all in on mythical and fairy tale characters while this one doesn’t. That’s the problem though too. This type of story didn’t necessarily need to be mythical creatures. They could’ve used anything. Even without the current pandemic, it’s possible that Onward wouldn’t have been one of Pixar’s top drawing films just because others have done it better. It’s certainly still worth a watch as another rock solid addition to the Disney-Pixar library though.