Horror isn’t always about blood and guts as many casual viewers think it is. Things like shock value, gore, and body count have long been tropes of the genre that fans have enjoyed but also reasons that some other moviegoers have written off horror. It’s too bad because there are a ton of films that have a lot to offer in terms of social and political commentary, religion, and family. With Relic, the debut feature from Natalie Erika James, not only does family play a pivotal role but so do other real-life worries like aging, mental illness, and mortality.

Though the film is James’s first feature, it’s not her first go-round as a writer and director. Prior to Relic, James spent much of the past decade working on short films. 2011 marked her debut short, Tritch, which was followed by 2013’s Burrow. She released Drum Wave in 2018 but it was the previous year’s short horror drama, Creswick, that served as direct inspiration to what was to come in Relic. In Creswick (which can be watched here), a woman’s fear of her childhood home is brought to light when her aging father acknowledges some kind of presence in the house. It’s not the exact same story as James’s feature length debut but you can see the obvious parallels. The seeds were sown with Creswick for James to expound a more in-depth tale of aging and its effects on a family.

Relic picks up with an old woman named Edna (Robyn Nevin) disappearing without a trace from her home in the woods. Her daughter, Kay (Emily Mortimer), and granddaughter, Sam (Bella Heathcote), arrive at the house after hearing from the neighbors that they haven’t seen any activity in quite some time. Upon arrival, Kay and Sam see that Edna has been acting strange on her own. There are new locks on some of the doors, cryptic notes scattered around the house, and a black mold growing in various parts of the house. After a few days though, Edna reappears without explanation but with erratic mood swings.  Kay and Sam fear that Edna may have dementia but there are other strange happenings in the house as Kay suffers from a recurring nightmare and Sam is left to discover the mysteries of the house. Ultimately, all three women must figure out whether there’s an explanation for everything going on or if there’s something more sinister afoot.

Like many of these modern day horror films we spotlight on this site, Relic isn’t your typical genre fare. In essence, it’s a slow burn haunted house movie with a chilling atmosphere and potential scares lurking in every dark corner. However, the film doesn’t exploit this. Instead, it leaves viewers waiting in anticipation for what’s to come but rarely does it deliver on this. In the case of Relic, this isn’t a bad thing. It’d be easy for James and company to have things popping out at you every few minutes for cheap jump scares. The most eerie aspect of the film though, is its ability to almost toy with the audience. There’s a mysterious, and almost ghostly, feel to the film which the smooth and patient camerawork will convince you to diligently scan the background of every shot. You’re given a chance to explore the house along with the characters and feel a certain presence looming. Mysteries are abound and viewers know only what the characters know. 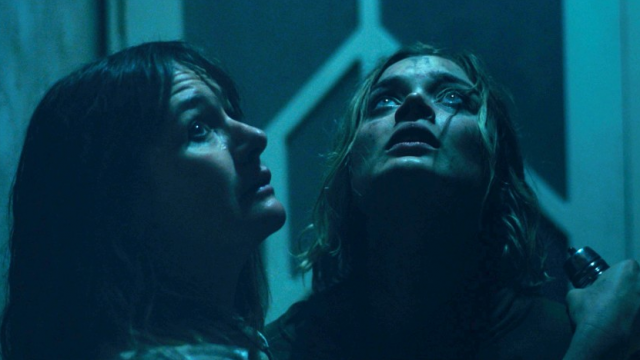 Speaking of the characters, the small cast of Relic is very, very good. Three generations of a family are explored through Sam, Kay, and Edna. Bella Heathcote as Sam is probably what most people expect in a horror movie character: a young woman who’s victimized by the horror source but, ultimately, comes out on top in the end. Yet, she’s not really that. While it’s true that Sam is often the one who experiences some of the more supernatural occurrences throughout the film, she’s a loyal and understanding granddaughter who wants to aid her grandmother in any way she can. She doesn’t spend all her time running away from a masked killer or monster. She’s constantly confronting the issue, in the form of Edna’s mental health, head-on. Emily Mortimer as Kay is kind of stuck between a rock and a hard place as she also wants what’s best for Edna but maybe isn’t willing to put in all the time necessary. There appears to be some kind of sordid history involving Kay and her parents and maybe a lack of the understanding that Sam has. Robyn Nevin’s Edna is mostly a source for horror. Though, as an elderly woman suffering from dementia, you also feel for the character. For those who may have relatives with this awful disease, Relic should really hit home with its characters. All three women play their roles perfectly in the film and keep you invested in all of them.

This brings us to the role that mental illness plays in the story. It’s hard to think of another horror film that focuses so heavily on the subject in this way. If one had to compare, Relic is kind of like The Babadook meets Hereditary in its depictions of mental health, family dramas, and overall haunted house tale. However, the success of the film does come by its own merit. While it does tease viewers with ghastly presences and unsettling imagery, viewers shouldn’t lose sight of each woman’s loosening grip on reality throughout Relic. All three suffer in their own ways, as do families when faced with diseases like dementia, and are torn on their particular circumstance. Kay takes a practical approach with trying to get Edna the help she needs while Sam goes the more humanistic and familial route by trying to take care of her grandmother herself. It’s a debate that affects almost all families at some point as people age and face their own mortality. James just adapts real-life horror into a cinematic version and does so with all of the emotion and confusion of a harsh reality. 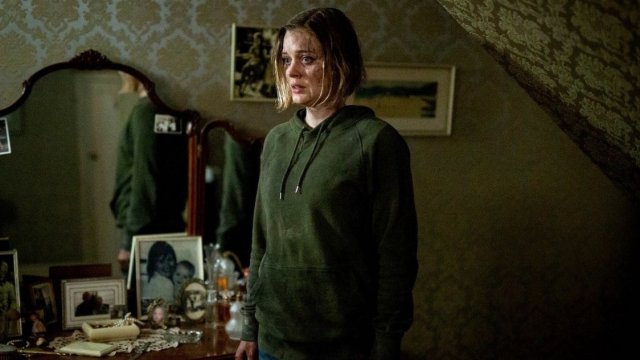 In this regard, if you’re a horror fan looking for everything to be spelled out for you, you may be disappointed. Relic is a film that largely succeeds by feel. The scenarios presented onscreen make you feel uncomfortable or creeped out. The inexplicable disappearance/reappearance of Edna and her eccentricities are bizarre and frightening just as they would be for someone dealing with this in real-life. The ending especially will catch viewers off-guard in that it’s just plain weird. Though, if you’re able to get past the weirdness, the overall message is kind of heartbreakingly positive. Of course, we won’t spoil the ending here so there’s not much more we can say on that.

As we previously mentioned, Relic isn’t your typical horror flick and it proves that over and over. Like 2018’s Hereditary, Relic is one of those films that’s a little hard to rank at first. There’s no doubt that it’s one of those that gets better with each viewing. There are so many subtleties scattered throughout the scenery that there’s no way viewers can get the full scope in one watch. While it doesn’t quite reach the psychotic horror heights of a film like Hereditary, Relic strives to be something different. It’s not all about body count and shock value. Relic is a film about people and the true horrors that they face in things like aging, disease, and, ultimately, impending death. For that alone, Natalie Erika James’s Relic is worth your time.

*Relic is currently available for rent or purchase on video-on-demand platforms like Amazon, Google Play, Vudu, and YouTube.*