With most movie theaters still closed at the time of this writing, we’ve reviewed quite a few strange and quirky titles on this site as of late. However, it’s been a few months since we’ve checked out a truly surreal acid trip type of film so let’s scratch that itch right now. The feature length sophomore effort from writer/director Amy Seimetz, She Dies Tomorrow, hit video-on-demand services this past Friday and has already been certified fresh on Rotten Tomatoes. This is somewhat shocking as the mind-bending psychodrama is capably put together by Seimetz but perhaps remains a little too ambiguous for some viewers.

Amy Seimetz is a name that some film buffs may recognize but moreso for her acting. Appearing in theatrical releases, television, and short films since the 2000’s, her biggest roles have come in the past few years. Seimetz had a recurring role in the final two seasons of AMC’s, and later Netflix’s, crime drama, The Killing. After that, she appeared in and even directed a number of episodes of the anthology series, The Girlfriend Experience. In 2017, she had a role in Ridley Scott’s Alien: Covenant before landing another television role in Netflix’s smash hit, Stranger Things, in a small role. Seimetz also starred in the most recent big screen adaptation of Stephen King’s Pet Sematary opposite Jason Clarke. Her filmmaking career began around the same time as her acting debut in the early to mid 2000’s. Beginning with short films, Seimetz wrote and directed her first feature, Sun Don’t Shine, in 2012 before following it up this year with She Dies Tomorrow.

Seimetz’ new film follows a young woman named Amy (Kate Lyn Sheil) who’s a recovering alcoholic that’s harboring a deep secret. Her friend, Jane (Jane Adams), calls and congratulates Amy on the purchase of her new home when Amy convinces Jane to stop by. During the visit, Amy insists that she’s going to die tomorrow. Jane is unnerved by the conversation sparked by Amy’s apparent relapse and returns home. It’s here that Jane all of a sudden begins suffering from the same visions and fears of dying that Amy had exhibited. Seeking solace, Jane passes along Amy’s contagious fears to her brother, Jason (Chris Messina), and his wife, Susan (Katie Aselton), among others. The film explores each character’s anger, sadness, dread, and acceptance over the supposed final day of their respective lives. 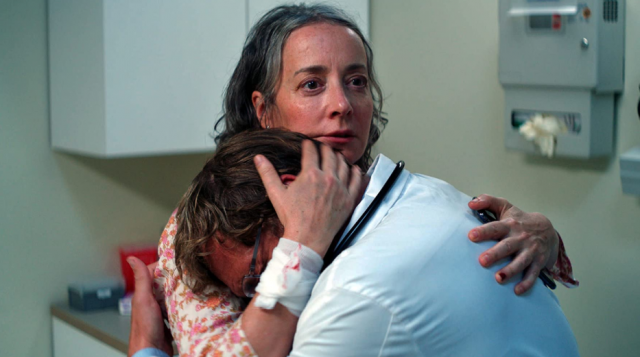 From the plot alone you can tell that She Dies Tomorrow is something of a fever dream of a film. There’s an obvious David Lynch vibe that many films of this ilk seem to have but it also doesn’t feel like a ripoff of his work either. Honestly, there are a number of titles that She Dies Tomorrow could be compared to. The wonderful usage of color and vibrant surreal imagery will bring to mind films like The Neon Demon or The Cook, the Thief, His Wife & Her Lover. Then, in addition to the striking color palette, there’s the creepiness and sinister feel of something like Brandon Cronenberg’s Possessor which was recently reviewed on this site. Lastly, in keeping with the horror vibe, there’s the transmitted death sentence as there is in a film like in the insanely underrated It Follows which we also covered here. Despite all the similarities She Dies Tomorrow shares with these other titles, it still feels quite original and will have you speculating until the credits roll.

Unfortunately though, the film does suffer from the same things that make it a worthy watch. With these surrealist films, they sometimes delve too far into the weird and not enough into the story. This only happens some of the time with She Dies Tomorrow. The opening of the film sort of drags on and sets the table for an agonizingly slow burn but, as soon as Amy passes along her fears onto Jane, the pacing picks up quite a bit. That is, until it starts to drag again when it fixates on Jane for a bit too long. The film is very much a stop-and-go at times where it piques interest before whiling it away again. You’ll never completely lose interest in what’s going on but it’s easy to get distracted during some of the film’s slower moments. In addition, there are flashbacks during the film so, if your mind does start to wander, you can expect to be confused when you get sucked back in. 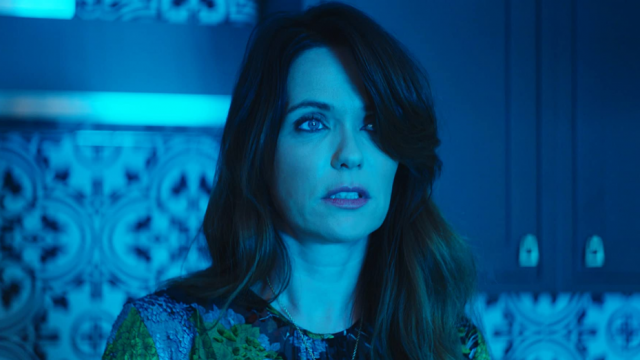 However, the film remains quite the conversation piece as you ponder what it’s actually about. Make no mistake, She Dies Tomorrow is definitely about something despite some of its meandering weirdness. There are a lot of takeaways and discussions viewers can have about the film as nothing is concrete and interpretation is probably best left to the audience. At various times, the film is about love, loss, happiness, and sadness. There’s always a constant fear that drapes over the partially fleshed out characters. The audience is allowed to put themselves into the shoes of these characters and consider their scenarios. If you were to die tomorrow, would you feel as though you’ve wasted your life or would you accept that it’s your time? Do you want your life to mean more in death or would you be content in being made into a human leather coat as Amy requests? The existential and fatalistic nature of the film stokes further conversation within oneself on the purpose of death. By far, this is the most impressive takeaway and where the film best challenges its viewers.

While She Dies Tomorrow doesn’t leave as lasting of an impression as some of our favorite films of this strange year, Amy Seimetz still displays a ton of artistic merit and deliberation in her sophomore feature. It’s one of those films that may be best interpreted over multiple watches. It’s also obvious that the film may sit better with some people than it does with others. In summation, She Dies Tomorrow is kind of whatever you make of it in that acid trip/fever dream type of way. For some, its questions about mortality will invoke a deeper appreciation for what Seimetz is doing with the film. For the rest, we’ll see what gets to them first: the boredom or the weirdness.

*She Dies Tomorrow is currently available for rent or purchase on video-on-demand services like Amazon, Google Play, Vudu, and YouTube. Check out the trailer below.*