In recent memory, there have been quite a few quality feature length debuts from young, up and coming filmmakers in the horror and thriller genres. Ari Aster launched onto the scene with Hereditary and followed it up with an equally tense and surreal effort in last year’s Midsommar. Robert Eggers released an intense slow burn of a film in the form of 2015’s The Witch and Alex Garland thrilled audiences with his superb science fiction drama, Ex Machina. Of course, both of those filmmakers achieved more success with their sophomore releases as well with The Lighthouse and Annihilation respectively. With such a solid track record for these young directors and their stylish thrillers, moviegoers may want to turn their attention to Carlo Mirabella-Davis for his uncomfortably bizarre feature length debut, Swallow.

Prior to his work on Swallow, Mirabella-Davis got his start mostly on short films. His debut came in the form of 2009’s Knife Point for which he won Best New Director at the Brooklyn International Film Festival. From there he co-directed the music documentary, The Swell Season, with two more shorts following that. Last April, Swallow had its world premiere at the Tribeca Film Festival after which IFC Films picked up the distribution rights. Despite being released back on March 6th, Swallow kind of flew under the radar as that was pretty close to the time the United States got hit with the COVID-19 fiasco. The film seems to be picking up a bit of steam though. It was tied for the highest grossing film during the week of April 17th and has grossed over $33,000 domestically and $267,000 worldwide.

The film focuses on a young woman named Hunter Conrad (Haley Bennett) who lives a comfortable life with her successful husband, Richie (Austin Stowell). However, the posh lifestyle and Richie’s often apathetic regard for his young bride have her walking on egg shells. When Hunter becomes pregnant, she starts to feel like she’s losing some control over her own life. To cope, she picks up a bizarre and dangerous habit where she consumes increasingly more dangerous items in an attempt to regain some kind of control. In addition, her shocking habit may also have ties to her own deep-seated and unspoken issues. Obviously, this doesn’t go over well with Richie and his parents, Michael (David Rasche) and Katherine (Elizabeth Marvel), whose stifling ways only push Hunter farther and farther into her strange addiction.

The plot, like so many we’ve covered lately on this site, is relatively simple. The film feels somewhat reminiscent of 2016’s Raw from Julia Docournau, another first time solo feature length filmmaker, as both films center on young women with unhealthy addictions. Though, Docournau’s film is more horror while Swallow goes the dramatic thriller route. The film also delves into family drama and even has some mystery elements at times. Hints about Hunter’s youth are dropped in scenes with her therapist but viewers will remain largely in the dark about them for most of the runtime. The film does a good job leading up to the reveal while constantly building suspense with Hunter’s exceedingly dangerous acts of defiance.

The film’s constant suspense and tension is easily the best thing about Swallow. In this regard, it’s a lot like John Cassavetes’ 1974 film, A Woman Under the Influence. Haley Bennett frequently channels her inner Gena Rowlands as a kind hearted, yet seriously disturbed and delusional, woman who can’t seem to cope with her issues in healthy ways. Of course, Bennett’s Hunter is much more destructive to her body than Rowlands is but there are some definite similarities in their mindsets and insistence that they no longer need help. Both films excel at building suspense and discomfort for viewers. In Swallow, every time you see the new item/trophy that Hunter intends to consume, you can almost feel it in your own body. Needless to say, the film will certainly give viewers anxiety and may not be for the squeamish.

In terms of characters, Mirabella-Davis does an excellent job fleshing them out and making them feel real. We’ve already mentioned Bennett channeling Gena Rowlands but she’s also much more defined than Rowlands’ Mabel Longhetti. As the film continues, much more about Hunter’s past is revealed and you can see how she maybe develops her impulses. This isn’t to say that Bennett puts in a better performance than the Oscar nominated turn by Rowlands but  she does a great job as the troubled, young Hunter nonetheless. While most of the other characters serve as antagonists to Bennett’s Hunter, there really aren’t any true villains in the film. As was the case with A Woman Under the Influence, Swallow is populated with characters that just don’t fully understand each other and their respective actions. Austin Stowell is rock solid as Hunter’s self-absorbed husband, Richie. Though he appears to enjoy Hunter’s company, he’s inattentive to her wants and needs. His actions (or lack thereof) directly contribute to Hunter’s issues. Denis O’Hare also has a small, but memorable, role in the film and, as is usually the case with O’Hare, leaves a lasting impression. 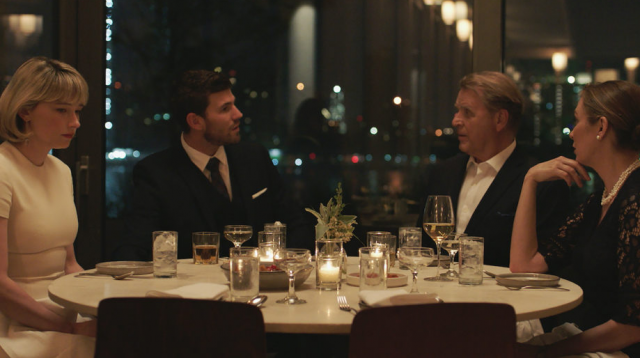 When it comes to issues with Swallow, there really isn’t too much to complain about. The film clocks in at a brisk 94 minutes which is plenty of time for Mirabella-Davis to tell this story. There are inciting incidents and reasons for Hunter’s behavior that get explored throughout the film and there’s a concrete conclusion to the story. One thing that sort of sticks out, though, is how quickly Hunter falls into her new swallowing game. It’s as if maybe she has had problems with this in the past. Viewers could theorize and search for potential clues about this but the film seems pretty set on Hunter’s addiction being new. This wouldn’t be a bad approach either if her swallowing these dangerous objects didn’t feel like an extreme response to some of the trivial issues she has. Yes, she often has a right to be upset about some of the things happening to her but, again, swallowing something like a thumb tack may be considered something of an overreaction.

Nitpicking aside, writer/director Carlo Mirabella-Davis strikes gold with Swallow. Bolstered by great performances and a satisfyingly uncomfortable story, Mirabella-Davis showcases his talents as a filmmaker with a beautifully shot film. He crafts a perfect world for a couple with a perfect facade. It’s only when you peel back the layers of these characters that you see what’s beneath. This is especially true for Haley Bennett who gives probably the best performance of her young career as Hunter. Like his contemporaries, Mirabella-Davis stands out as a filmmaker to watch moving forward. If Swallow is any indication, the sky’s the limit for him.

*Swallow is currently available for rent or purchase on video-on-demand platforms like YouTube, Google Play, and Amazon.*