Due to the success of films like The Exorcist, the horror genre became much more graphic and shocking as the late 1970’s and 1980’s approached. This brought about the rise of the “body horror” sub-genre. Body horror can be described as anything pertaining to the altering or destruction of the human body. Films like Ridley Scott’s Alien, John Carpenter’s The Thing, and Sam Raimi’s The Evil Dead all displayed this through gory practical effects. However, there is arguably no film that represents body horror better than David Cronenberg’s 1986 masterpiece, The Fly.

Over the years, Cronenberg’s name has become synonymous with the sub-genre due to his films like The Brood, Scanners, and Videodrome. His films tend to center around mutations of the human body through mutilation and disease. While Cronenberg’s work is often quite gruesome, it isn’t without purpose. His characters tend to be sympathetic and likable as they deal with their respective situations. Often, it’s the monster inside that manipulates the human form as opposed to having inherently evil people be the monsters in his films.This is exactly the case in The Fly.

The film stars Jeff Goldblum as Seth Brundle. Seth invents a teleportation system that he expects will change the world and human travel as we know it. He decides to show his “telepods” to a journalist named Veronica, or Ronnie for short, played by Geena Davis. The only downfall of the system is that Seth hasn’t mastered how to teleport animate objects. After the two begin a romance, Seth does learn how to teleport live subjects and tests it on himself along with a housefly that, unbeknownst to Seth, is in the telepod with him. The telepod fuses Seth’s DNA with that of the housefly and Seth gains new abilities and physically begins to change into a fly. 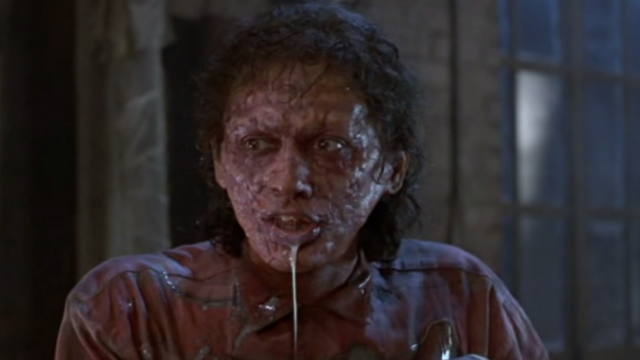 The film was adapted from a short story by George Langelaan and is actually a remake of a 1958 film of the same name that starred David Hedison. While the plot may sound bizarre and maybe even a bit comical, it’s anything but. The physical transformation that Seth continuously undergoes is more shocking with each time he’s seen onscreen. As his body changes, he becomes increasingly mentally unstable as he becomes more beast than man. His only remaining link to the outside world is through Ronnie who is tormented nonstop throughout the film. Cronenberg plays Seth’s situation as seriously as possible as the effects of a debilitating disease.

The Fly is quite possibly the best Jeff Goldblum has ever been in a film. He’s immediately likable as the geeky, but charming, Seth Brundle. Following his successful teleportation, he goes from being psychotic and powerful to woeful and frail. Eventually, he realizes that the monster has taken over and there’s nothing he can do to stop it. He develops insect traits along with twitchy, physical tics as well. Goldblum’s performance is so haunting and tragic that it’s equally as impressive as the special effects themselves.

Along with Goldblum’s performance, there’s the script itself. There are a few instances where the dialogue is so ominous and doom-ridden that it can also be considered a highlight. Seth has a monologue towards the end of the film where he’s speaking to Ronnie and it’s as if it’s his final premonition. The dialogue reads, “I’m an insect who dreamt he was a man and loved it. But now the dream is over and the insect is awake. I’m saying (pause) I’ll hurt you if you stay.” To not get goosebumps during that scene alone is inconceivable. 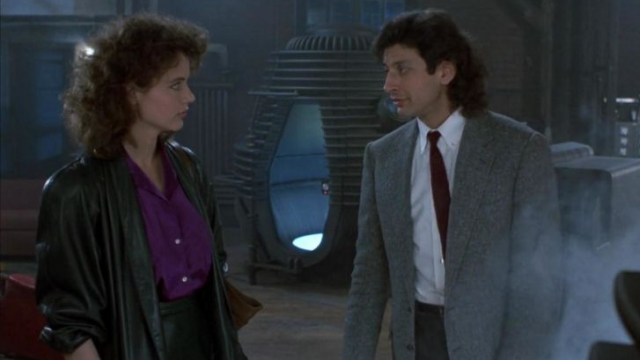 Speaking of the special effects, they are absolutely astounding. Never once does it feel like what you’re seeing isn’t real. That’s a testament as to how practical effects will trump computer generated imagery every single time. Cronenberg’s gross-out effects used for Seth are some of the best seen on film. In fact, the film won an Academy Award for Best Makeup. It’s a rarity for horror films to be nominated in general let alone win the Oscar. The final transformation is possibly the most frightening scene of all and it must be seen to be believed.

There’s so much that can be said about The Fly but, essentially, it’s the perfect horror film. It features a tragic character, amazing special effects, an excellent score by Howard Shore, and plenty of gore to sate any horror fan’s appetite. The only downfall is that it slightly dates itself with the clothing and hairstyles of the film. Though, that issue is so minor that it’s impossible to fault it for that. This is simply everything that a horror film should be. So many are such schlock these days and they focus heavily on body count and gore. The Fly relies solely on the transformation of a human being into an unintentionally self-created monster. Every scene is delivered with purpose and the sorrow that you feel for Goldblum’s Seth Brundle is what truly makes this film one of the best in the horror genre.