In the past, we’ve given glowing reviews to a number of “micro” short films on this site. Films like Denial, H-24, and Bill have all made the most of their limited runtime to engage, entertain, and relay their brief stories in satisfying ways for viewers. Today will apparently be no different as we cover Sean Meehan’s new film, Camera Test Subject.

The film offers a peek inside the mind of an actor in the throes of something truly terrible: a camera test. That’s the official synopsis and understandably so. Basically, the Test Subject (Timothy J. Cox) is directed and filmed by an unseen person leading the camera test. During this process, we hear the Test Subject’s inner monologue as his insecurities and paranoia come to the forefront while fulfilling his duty.

There’s not much else to say about the plot of the film. It’s basically a sort of “stream of consciousness” brand of storytelling as the Test Subject shares some anxiety throughout the shoot while often bordering on the mundane. Thoughts of being allowed to buy a keychain or magnet from street peddlers and naming off state capitals become commonplace during the shoot. There’s also something almost torturous about the experience as the Test Subject is always left to wonder what exactly the person behind the camera is looking for or what kind of “game” he/she is looking to play. It’s unclear if this is all just in the Test Subject’s head or if there’s maybe something more sinister afoot. 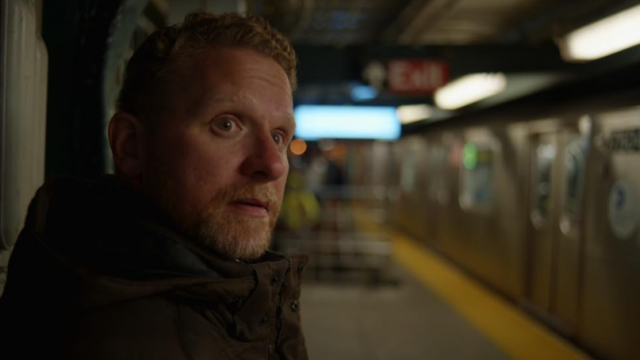 Of course, what really sells Camera Test Subject is its wonderful performance solely from Timothy J. Cox. We’ve praised the actor numerous times on this site and his work on this film really demonstrates his range and talent.  While we do hear Cox’s voice during the character’s voiceover, it’s really the facials that give life to this character. Even if you’d strip away the voiceover, to which Cox also gives a believably annoyed, bored, paranaoid, and even creepily satisfied performance given the character’s mood at the time, the actor’s face tells most of the story. Cox has an electricity onscreen and brings an energy to what must’ve been a challenging character to portray in the span of three minutes. Overall, the film feels slightly reminiscent to Jim Carrey’s voiceover scenes as Joel Barish in Michel Gondry’s Eternal Sunshine of the Spotless Mind.

The other highlight of the film is Sean Meehan’s one man filmmaking smorgasbord. His sharp and vibrant camerawork shows a sort of hauntingly beautiful side of New York City. Bustling city streets and common NYC locations are avoided to instead show the Test Subject in a sort of isolation from the rest of the city. It’s interesting to see the city depicted in such a creative way and really shows off the impressive eye and vision of Meehan as a filmmaker. The editing, also by Meehan, is also perfect as it shares a wealth of emotions as Cox’s Test Subject navigates through the shooting. Something like this can really feel pieced together and jumpy but, between the locations, dialogue, performance, and somber piano soundtrack, there’s a smooth overall flow to Meehan’s editing of the film.

Camera Test Subject is a completely satisfying, entertaining, and expertly made “micro” short film. The performance by Cox is superb and entirely fits the tone and mood that Meehan is going for with his script and visuals. In addition, it captures the understandable feelings, questions, and unavoidable mind wandering that may take place in a performer’s head while waiting for direction or cues. In the end, there’s just nothing bad to say about the film. Camera Test Subject boasts another outstanding role from Timothy J. Cox and also shows off Sean Meehan’s penchant for filmmaking of the absolute highest quality.