In filmmaking, it’s not always an easy task to establish characters, tell compelling stories, and/or deliver a message in general. While feature length films have about two hours on average to do these things, short films begin with a disadvantage in this regard. They have far less time to hook an audience and weave their tales. While we’ve covered plenty of great ones on this site, we’ve never had one that clocks in at a brisk three minutes. However, Misti Dawn Garritano and Mackenzie Barmen’s rapid-fire short film, Denial, is not only extremely brief but also well told and quite entertaining.

The plot centers on a man named John (Timothy J. Cox) and his Wife (Garritano). In the middle of transporting laundry, the Wife passes John in the doorway to the bathroom. Here, she discovers that there’s something wrong with the toilet handle causing it to not flush. The Wife calls for John who heads back upstairs to fix the toilet but ends up spending quite a bit of time in there. This leads the Wife to check on her husband to see what could possibly be taking him so long.

As previously mentioned, this film is only three minutes long so we’ll cut the description off there to avoid any spoilers. Regardless, the plot is simple, yet effective, overall. It’s not something that’s overly original as there have been films and TV shows that have toyed with the same ideas portrayed in Denial. However, this short still excels due to its playfulness and amusing interactions. 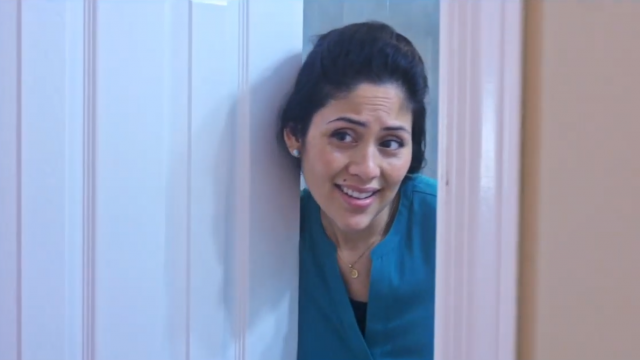 Much of this has to do with Denial‘s two rock solid performances. Timothy J. Cox has been a staple of the short film reviews on this site and with good reason. He always puts in excellent performances no matter the size of the role. As John, he plays a seemingly happy-go-lucky husband who wants the best for him and his wife. Though, you soon discover that there’s something underhanded about about his character in this film. Writer/co-director/co-star Misti Dawn Garritano does a great job alongside Cox as well. She’s ridiculously charming and the two have an onscreen chemistry that shines through despite the short runtime.

When it comes to the technical aspects of the film, Denial is solid there too. It lacks some of the breathtaking cinematography of previously reviewed films like Here Lies Joe or Slapface, but it’s also a different kind of film than those. The house shared by John and his Wife doesn’t feel like just a set. It feels lived in and, for that, is convincing for the film. Most likely, it’s actually one of the cast or crew members’ home. The camerawork is smooth throughout and the shots are sharp. Then, there’s the lighthearted musical woodwinds from Tessa Dolce which feel like something from an old cartoon or a Tom Waits album. Either way, it’s the perfect soundtrack for the events of this film.

Clocking in at three minutes, Denial is a surprising “micro” piece of cinema. It hits all the beats you need for an intriguing story and looks and sounds good doing it. It maybe doesn’t have the staying power of some of the longer or more heavy handed shorts but it’s sure to entertain in its limited time. The best thing, by far, are the film’s performances and both Cox and Garritano should leave viewers wanting to maybe see more of these two in the future. If you have a quick three minutes to spare, Denial is worth your time.