Sometimes in film, it’s alright to just have fun. Additionally, it’s alright for a filmmaker to have fun and still have something to say. This is exactly the case with Zachary Lapierre’s short film, Dirty Books. For the film, Lapierre serves as the director, co-writer (along with Ian Everhart), sound mixer, and sound/music supervisor. Throughout its sixteen minute runtime, Lapierre shows off a style and feel of his own in this playful romp of a short film.

The film opens with high school student, David Burrough (Noah Bailey), being informed by the principal, Dr. Bailey (Timothy J. Cox), that the school paper would be shut down at the end of the school year. David, editor-in-chief of the Prichard Hall Gazette, doesn’t take the news lightly. Despite being told that he’d be allowed to run a school blog, David shoots down the notion and accuses Bradley of killing the printed word. In an attempt to save the paper, David begins pulling anonymous pranks around the school and covering them in the Gazette to boost readership.

This kind of a story should sound familiar to most at this point. In this day and age, social media and technology in general has surpassed physical media at this point. While newspapers, magazines, and books still exist, it’s much more common to find someone getting their news online or enjoying a novel on an e-reader. Even other forms of media like movies and video games are now streamed and downloaded instead of being bought at a store. As technology advances, it’s much more cost efficient and convenient to move on from a physical product. Yet, for some of us, there’s something special about being able to actually hold something tangible in your hands as opposed to knowing it merely exists as data. For those in this category, you definitely understand David’s plight. 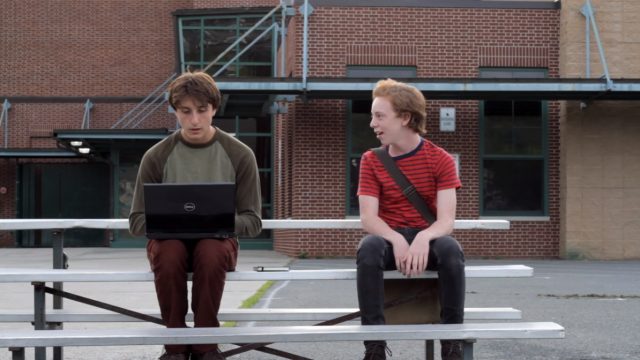 One of the best things about the film is its tone and overall look. The camerawork throughout the film is excellent. Even though many of the locations are pretty basic in general, the shots and editing make them feel more interesting. There are two sequences that see David delivering newspapers around his neighborhood and highlighting his shenanigans set to some perfectly fitting tunes (“Strange Ideas” by Beach Toys and “Blood Drinkers Only” by Beware the Dangers of a Ghost Scorpion!). Within the confines of a sixteen minute short film, both songs feel like they belong in their respective sequences and add to the film’s playful nature. Three other songs also find their way into Dirty Books but none of them ever feel shoehorned in and add flair to the film.

The cast of Dirty Books also does a great job all across the board. Timothy J. Cox is a standout as Dr. Bradley. He’s not your typical domineering authority figure like, say, Paul Gleason’s Richard Vernon from The Breakfast Club. He explains to David why the paper cannot continue and even gives him the option to maintain the blog. He’s not trying to cut David’s legs out from under him as is often the case. David’s lone confidante, Owens (Isaiah Lapierre), embodies a typical youth as his eyes rarely leave his laptop screen. Though, he does carry around a handwritten journal documenting all the goings-on at Prichard Hall as an interesting quirk. 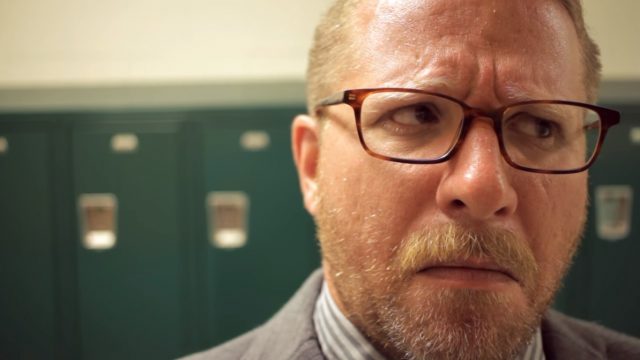 As for Noah Bailey’s David, he’s a bit uneven. Bailey doesn’t give a bad performance but the way the character is written is somewhat contradictory. Initially, David is distraught about losing the paper. As the film continues, he’s more concerned about his high school legacy than he is about the printed word. He wants to be remembered for the things he has done to stand out. Instead of his writing, it’s his actions as the Prichard Hall prankster that will make people remember. On top of that, he’s rather rude towards other people and it leaves you wondering why you should care about what happens to him. Again though, Bailey’s performance is solid but the written character leaves a little to be desired.

For the most part, Dirty Books succeeds as a short film. There are minor issues such as David’s hypocritical and pretentious nature along with a somewhat convenient plot twist that won’t be given away here. Yet, it’s hard to dislike the film. It’s witty, has a charm to it, and looks and sounds great. As a filmmaker, Zachary Lapierre displays such a knack for lively and spirited storytelling that it almost feels like Dirty Books is the first act of a potential feature length film. Despite its flaws, this is definitely one worth checking out.