One of the great things about filmmaking is how one can do so much with so little. Experimental filmmaking has long been a proponent of this. You don’t always need everything spelled out for you to enjoy and understand a filmmaker’s vision. It’s true that this can sometimes anger and confuse viewers, but there’s also something extremely stimulating when you come across a film that can be whatever you want it to be. In the case of Yassine Harbachi’s debut short film, H-24, you can either take the story at face value or you can go down the rabbit hole and interpret it however you see fit.

The film opens with the image of a man named Carl (Pierre Glénat) sitting in a plain, empty room. As he sits mostly expressionless, the narration from Carl explains that he has been harboring a deep secret in that he’s able to experience his future as visions. However, he’s only able to do so for a 24 hour period. Carl’s most recent vision was of his own death. From here, viewers are left to wonder if Carl’s vision is to become a reality or if it’s all in his head.

Like we did in our review of three minute short, Denial, back in November, we won’t delve deeper into the plot for H-24 which clocks in only at a little over four minutes. Like Denial though, the plot is simple but effective. The story is mainly told by way of an internal monologue based on existentialism and a perceived reality. Viewers only see the black and white (literally) of Carl’s current situation. You don’t see what Carl sees or even get clued in to the things he knows to be true. It’s basically left up to the viewer to question what’s real or fiction in Carl’s life. You’re dropped in without any previous knowledge and expected to create a reality based on Carl’s words. In a lot of ways, it’s almost an abbreviated version of Chris Marker’s 1962 film La Jetée in terms of its content and even its aesthetic. 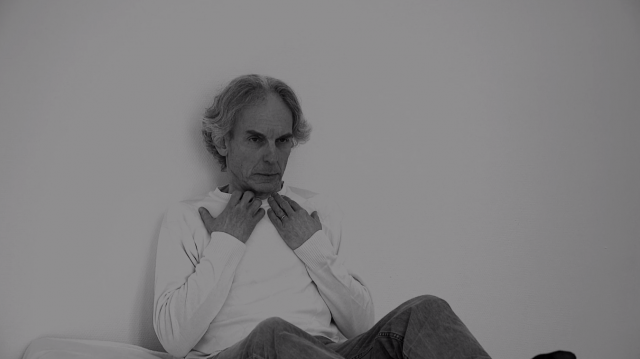 When it comes to the look of the film, it’s very basic and uninteresting but in the most interesting way possible. The monochrome color scheme just seems to fit and it makes Glénat’s Carl pop off the screen. The resolution of the images is fantastic as you can see every line on Carl’s face, the pattern on his plain, white sweater, and even the texture of the same colored wall behind him. While it’s true that there’s not much to catch your eye at first glance, you’ll find yourself looking deeper into the image as you hear/read Carl’s words. It’s a hypnotic combination of audio and visual with a mind bending subject at its core. To reference La Jetée once again, that film takes a similar approach with its black and white visuals being accompanied by calmly intriguing and somewhat damning dialogue. Though, La Jetée relies almost solely on still images, it wouldn’t be hard to see H-24 done in a similar visual style.

However, that’d be an injustice to the performance onscreen from Pierre Glénat’s beautifully subdued portrayal of Carl. Initially, you’re not even sure if it’s Carl that’s providing the film’s narration. At times it seems as if Carl is reacting to someone else’s tale of visions. The subtleties of Glénat’s performance keep the character strangely interesting. Whether it’s an eye movement, a furrowed brow, a slight smirk, or even a blank expression, there seems to be meaning behind each of Carl’s movements as he reflects on his life and death. Perhaps Glénat didn’t have a very physical task for this role but there’s a perfectly haunting tranquility to his performance.

Frankly, it’s hard to find anything negative to say about Yassine Harbachi’s debut short. The lone criticism, as is the case with so many short films, is that it’s not longer. There’s potential here for Harbachi and Glénat to delve further into this character and take viewers on a journey through the mind of someone with the ability to have these fatalistic apparitions. Of course, then the film may lose some of its mystery. Regardless, it’s a story that could potentially be enhanced upon in the future. As it stands, H-24 is intoxicating as the interpretations of Carl’s story are boundless. Definitely give this one a shot if you’re looking for a film that will challenge and intrigue.