In our current COVID-19 stricken world, filmmaking has largely been put on hold, especially in Hollywood, and everyone’s just in wait-and-see mode. Theaters are losing money hand over fist with very few theatrical films being released due largely in part to a fear of low returns. Yet, there are others who are still trying to move forward and make the best of the situation that we’ve all been handed. For today’s Short Film Review, we’re doing something a little bit different. We’re actually not reviewing a short film at all. Instead, we’re reviewing a one act virtual play recorded over Zoom. Steve Blackwood’s production of Private is a bit cliched but still tells a compelling story regardless of the limitations of the medium.

The play opens with narration from Killarney Traynor setting the stage for viewers. On a hot August night in 1949 Detroit, Sally Danforth (Ally Looney), a chorus girl turned socialite, enters the office of Jim Calloway (Blackwood), the two-bit private detective she’s hired. The purpose of the meeting is for Calloway to relay his findings on Mrs. Danforth’s husband’s mysterious murder. As the two converse, they realize that they may have a little more in common than previously believed as morals and ethics remain the only hurdle left between them.

Firstly, it should be stated that, again, this is a virtual play performed over Zoom. Because of this, we’re not going to criticize audio/video quality or aesthetics. A static stereotypical detective’s office is featured as the background for the play and, even though it’s not ideal, it’s a nice mood setting touch. The same can be said for the monochrome color palette. Upon first glance, viewers will identify Private as a film noir type of tale and, in that regard, the simple visual touches do their job perfectly. 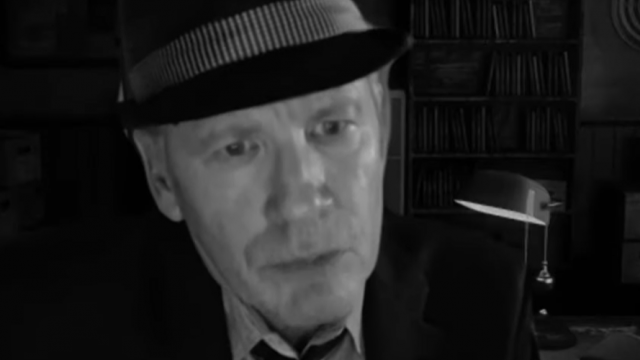 Obviously, Private is a total performance driven piece and it doesn’t disappoint. We’ve praised writer/director/actor/everything Steve Blackwood in the past for both his filmmaking and acting abilities in his previous work on films like Meet the Author and Stuck. Here, of course, it’s his acting that warrants attention. In his aforementioned short films, Blackwood used comedy to help define his sometimes irritated and sometimes aloof characters. With Private, he takes a different approach with his one-step-ahead detective. Calloway knows there’s more to the story than maybe Mrs. Danford has let on but he uses his charm and even his underwhelming reputation to get the answers he seeks. Ally Looney is also quite good as Mrs. Danford. She’s another sort of stereotypical, yet sympathetic, character and both Looney and Blackwood perform well off of each other. Normally in this type of film noir piece, Looney would play a more obvious femme fatale but this story does stray a little from standard noir. While Looney’s Mrs. Danford still has some of these qualities, they’re not always at the forefront of the character which is a welcome change to set Private apart.

While Private does boast an interesting story with convincing acting from both of the performers, it’s hard not to notice that it’s also somewhat cliched. It’s a standard detective story with the same type of dilemmas that you’d expect from film noir. Just by the title and poster image alone, viewers should know what to expect from the play. This isn’t necessarily a bad thing as the performers do a great job selling the story but Private isn’t going to change anyone’s perception. It also felt like there may have been a few spots where the actors stumbled a little bit but nothing too glaring. There were one or two lengthy beats between lines that threw off the pacing ever so slightly which is the only thing that made them noticeable. Again though, it’s hard to get down on the play due to the limitations it faced.

What Private really ends up being is a fun experiment. Conducting a one act play solely on and video conferencing application is a bold move but it pays off for Blackwood and company here. The will to create trumps mostly everything else and it’s awesome to see filmmakers and talent getting thrifty and resourceful to continue their craft. As previously mentioned, Private isn’t going to change the world but it has a relevant story and convincing performances that allow viewers to forget about its clear limitations.