There’s something that just feels so timeless when it comes to period piece gangster films. It’s a well that has been gone back to countless times that filmmakers and audiences alike are still able to drink from. A director like Martin Scorsese continues to return to his past successes and reinvent himself with every new gangster epic he releases from Goodfellas to The Departed to his most recent achievements with The Irishman. Films about the mob aren’t limited to features by legendary filmmakers either. Last year, we reviewed Joe Benedetto’s short film, Hide the Sausage, which boasted nice visuals and an interesting and likable lead character. Now today, we have Gabrielle Rosson’s visually stunning short, Salvation, which boasts a simple and effective story that’s bound to leave audiences satisfied by the end of its twelve minute runtime.

Set in the 1950’s, the film follows Salvatore (Kris Salvi), a mobster tasked with finding a colleague who has gone missing. Salvatore does so in quick fashion as he finds Santo (Justin Thibault) hiding out near the ocean. The two reunite and discuss the lives they’ve lived and the things they’ve done. With the men now on opposing sides of their profession, both need to find a way to justify and be at peace with themselves and their past choices in life.

Adapted by Rosson from an original story by Kris Salvi entitled “Fink,” Salvation is a simple and effective tale of friendship, betrayal, and retribution. The story isn’t unlike any we’ve seen in the gangster or film/neo-noir genres before and it’s a little unspectacular because of it. However, it’s the execution that really drives the familiar plot home. From top to bottom, Rosson puts together an impressive piece of short cinema with a talented cast, great camerawork, and striking visuals. In our correspondence with the writer/director, she stated that she began making films just over a year ago after studying screenwriting. Given how polished and well made Salvation is, it’s shocking that this is only Rosson’s second effort after spending many years as a musician.

The first thing viewers may notice about Salvation is its look and feel. The film opens like numerous classic noir flicks in beautiful black and white accompanied by bluesy original music from Ian Rashkin. Then, a warm toned color palette is slowly introduced as the room comes more into view. From here, the film does stray slightly from its classic feel as beach and ocean take center stage with wonderful camerawork and framing making every shot feel unique. Rosson, who also handled the film’s production design, boasts a wonderful eye for detail throughout every shot. Partnered with cinematographer Manx Magyar, Rosson’s vision for the film remains familiar but original, consistent but unpredictable. Additionally, 50’s era cars and even a legitimate Massachusetts diner help maintain the noir feel long after the black and white imagery fades away.

The small cast is also a major highlight in Salvation. Kris Salvi, who we praised previously in Christopher Di Nunzio’s short film, I Am a Rain Dog, is excellent here again. Salvi’s Salvatore is gruff, to the point, but also fair when dealing with Santo. He doesn’t mince words and is basically there to do his job. You can tell he doesn’t always enjoy his line of work but also understands that some decisions aren’t his to make. Still, he never lets his compassion get in the way for what needs to be done. Justin Thibault’s Santo is the more emotional of the two lead characters. Essentially, he’s that compassionate piece of Salvatore that the latter doesn’t let see the light of day. Santo feels remorse for the things he has done and wonders aloud if things could’ve gone differently. The dynamic between the two characters is interesting in that they’re two sides of the same coin. Differing viewpoints and opinions still landed both men in the same place. 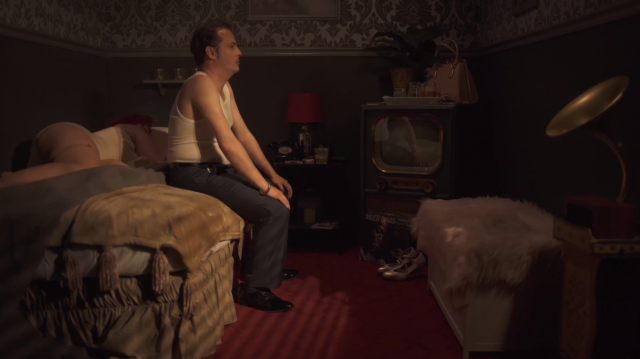 The one spot that Salvation sort of falters is in its faithfulness as a period piece. For the most part, Rosson and company do a fantastic job throughout. As previously mentioned, the film is consistent in tone while still keeping viewers on their toes. Yet, there’s a strange recurring musical choice in the form of Sennid’s track, “Brain Food.” The swanky tune is used multiple times throughout Salvation and it works in a sort of Baz Luhrmann type of way. That being said, it’s the only part of the film that feels like it’s not trying to be a period piece. In that regard, it’s a questionable choice of song despite actually fitting the look and feel of the film overall. It’s kind of like Luhrmann’s The Great Gatsby when the film starts out wild with all kinds of modern music before slipping firmly into a period drama by the end. There’s nothing wrong with “Brain Food” itself. It’s just that Rosson seems dedicated to a period piece before interjecting with something oddly contemporary.

Gabrielle Rosson’s Salvation is definitely a triumph for a budding filmmaker. With some great performances, a clear vision, and natural filmmaking prowess, Rosson has worlds of potential going forward. With only two films currently under her belt, it’ll be exciting to see what she does next. Luckily, viewers may not have to wait long, depending on if the pandemic has any say, as she’s already working on her next film, Dessert. With Salvation, Gabrielle Rosson proves her talents as a filmmaker are numerous in quantity and we can’t wait to see how far said talents take her.

*Salvation is currently playing on the film festival circuit. Check out the trailer below.*