There’s a reason that folktales are a common go-to for storytellers of all kinds the world over. Every country, region, religion, race, etc. have their own persisting stories and storytellers love to put their own twists and turns on legends of old. Of course, film is a perfect medium for doing this and folktales and folklore have been put on the screen basically since the technology was invented. Silent films like Nosferatu and Faust from the 1920’s are some iconic early examples while films like The Curse of La Llorona and Gretel & Hansel are more recent, albeit less quality, instances. These types of adaptations aren’t limited to features either. In the case of Callum Windsor’s filmmaking debut, The Erl King is an atmospheric short film based on German writer Johann Wolfgang von Goethe’s 1782 poem, “Erlkönig.”

The film focuses on a woman named Julia (Louise Elliker) and her young son, Alfie (Lewis Hyman). Alfie recently lost his father (Simon Victor) to a car crash that also left him scarred in the process. Unfortunately for Julia, she must deal with the fallout of the crash as Alfie claims to still see and interact with his father. Mother and son fail to reconnect following the accident and, during a holiday festival, Alfie acquires a strange book after coming across a strange entity in the woods. Ultimately, the visions that Alfie suffers from may not be of his father but of something more mystically dangerous.

The plot of The Erl King isn’t an exact reproduction of Goethe’s poem but more of a “re-imagining” as Hollywood would say. The poem centers on a father transporting his young son on horseback, potentially to receive medical aid, as the boy suffers from delusions of the mythical Erl King. The boy’s condition worsens during the journey only for the father to discover he has already perished as they arrive at their destination. Written by Marisol Suarez, Charlie Parkin, and Windsor himself, the short film strays from the source material. Obviously, the father has already passed away as the focus turns to the relationship between mother and son. Though, Alfie still suffers from delusion perhaps in a PTSD kind of way. Regardless, the film does a good job honoring Goethe’s work while also aiming to tell its own story as well. 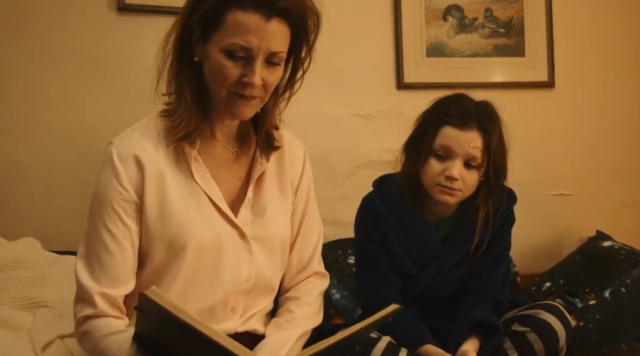 Despite their relative acting inexperience, both Louise Elliker and Lewis Hyman do solid work as The Erl King‘s two leads. As Julia, Elliker does a good job trying to be a loving mother while also being concerned about her son’s mental state. Julia tries to maintain some semblance of normalcy but struggles to keep it together. Hyman’s Alfie is innocent and seems often unaware that anything is off-kilter with his delusions. He goes about childhood as usual in between cryptic meetings with the Erl King. When there is cause for concern, his facials do most of the work in relaying his feelings to the audience. During the introductory car scene especially, viewers can see that something is amiss as a look of confusion mixed with fear crosses Alfie’s face. The mother/son combo doesn’t quite reach the combustible heights of Amelia and Samuel from Jennifer Kent’s The Babadook but they put in admirable performances nonetheless.

Where The Erl King really succeeds though is in its atmosphere. Every scene is crafted to highlight the sense of loss and emptiness of the family. From Julia’s perspective, they’re haunted by something they can’t even see or acknowledge. There’s a bleak look to the film that only ever lets up in one scene. The holiday festival has life to it but it’s also followed up by one of the most eerie scenes in the entire film. We won’t spoil anything here but it’d be effective in pretty much any big budget horror feature. Here, it serves as one of the film’s greatest highlights. Additionally, the film has an excellent original score from co-screenwriter Charlie Parkin. Its ending emotional swell is pitch perfect and provides a nice cherry on top of a satisfying short film experience. 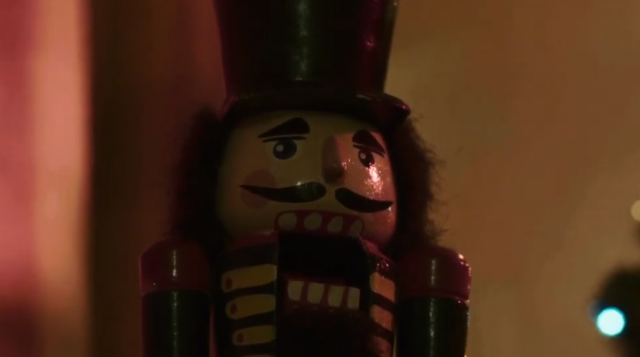 That being said, there are a new nits to pick. The film is classified as psychological horror but, other than the one scene, it’s a little lacking in the horror department. It’s more of a dramatic thriller than anything. This brings us to the next issue though. While the film functions quite fine as it is, the story of “Erlkönig” may leave viewers a bit underwhelmed with what they get with The Erl King. The idea of a child being tantalized by rewarding visions only to be taken by force at the end leaves the option for a ton of creative scenarios. Unfortunately, we don’t really get those in this film. Perhaps budgeting and practicality played into a more realistic approach but there’s definitely a question of what could’ve been. This also could’ve helped to add in some more horror elements. The final minor issue is with Lewis Hyman’s final monologue reciting the Edgar Alfred Bowring translation of Goethe’s poem. With the emotional theme playing over it, it’s kind of hard to decipher Hyman’s words. It’s a great ending to the film but something could be done to clean that up a little bit.

Still, The Erl King is a win for everyone involved. Callum Windsor crafts an excellent short film that would trump most features of this kind. The story is very intriguing and provides a nice twist on Goethe’s original poem. Sure, there are some things that could done a little better with a greater emphasis on some of the missing elements of “Erlkönig” but what is here is fascinating. If this is what this cast and crew has for a debut film, whatever comes next should be an absolute treat. For those interested in folktales, Goethe, or just well crafted short films in general, The Erl King is a must watch. If you’re not familiar with the original poem, definitely give that a read as well.