Today, we’re doing a little bit of a throwback and looking at a film from 2010. Writer/director Sy Cody White has been pumping out short films for a solid decade now, of which many have been related to video games. White has made shorts based on Until Dawn, The Last of Us, and the Uncharted series throughout his career. He hasn’t always dabbled in work based on video games though. His film career began with his impressive $350 crime/drama/thriller, The Watchers.

The film centers on John Porter (Jeff Moffitt), a man who has been through a recent rough patch in his life. He regularly meets with his therapist, Dr. Orwell (Timothy J. Cox), and tries to patch things up with his wife, Marcie (voiced by Nikki Flanagan). Though, he’s unsuccessful with the latter and often spends his time leaving voicemails. John notices that a number of different people watch him as he goes through his days. They know his name and claim to be waiting for him. John begins to unravel as he tries to figure out who the watchers are and what they want.

One of the first things you notice about The Watchers is the video quality. It was originally released in 2010 which was a little before the standardization of high definition. It’s shocking to think of media in this light especially since Unsane, a film shot entirely on an iPhone, was just released in theaters a few weeks ago. In 2018, The Watchers isn’t going to visually dazzle anyone. However, that’s not necessarily a bad thing here. In a film like this, it almost feels like a choice of style reminiscent of films like Pusher or Trainspotting. Aesthetically, they’re not polished but there’s still a gritty realism to them. There’s also a late 70’s vibe to the look which reminds you of films like Taxi Driver. 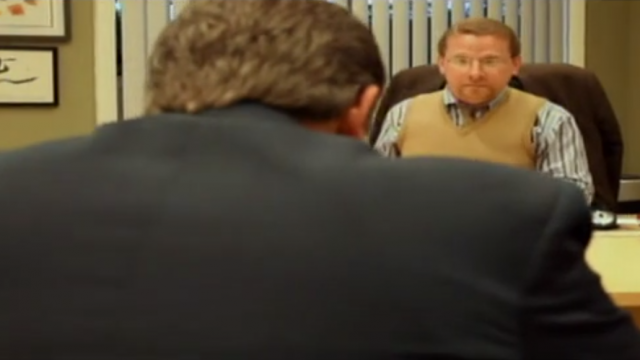 When it comes down to The Watchers’ influences, there definitely seem to be many. Among others, there are certainly similarities to The Machinist, Secret Window, and Memento. All three of those films involve their respective main character being psychologically tortured by mysterious assailants. Specifically, the usage of Post-It notes in The Watchers hearkens back mostly to The Machinist while John’s paranoia and mental degradation is a trait of all three of these films. In addition, does anyone else get a Ghost vibe from The Watchers? There’s just something about John’s appearance, job, and his trip to the subway station that hint at the Patrick Swayze-led classic.

Despite its potential influences, The Watchers still feels like it has its own identity as well. Jeff Moffitt does a great job as the main character, John. He feels like a downtrodden outcast while still trying to put the pieces of his life back together. Timothy J. Cox probably has the most screen time next to Moffitt and makes an impact as he’s wont to do. The delightfully schizophrenic soundtrack makes quite an impression as well. It jumps from suspenseful horror-esque tunes to Danny Elfman-like whimsy and then all the way to some electronic club music during the credits. To some, it may feel like a bit much but it does fit with the deterioration of John’s mental state and his increasingly erratic actions. 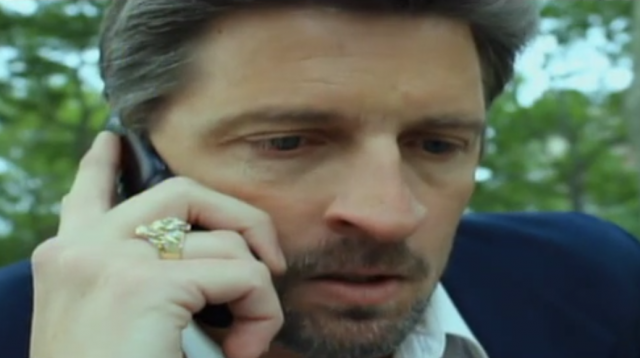 If there are any negatives about The Watchers, it’s that it doesn’t entirely dig deep enough. We’ve mentioned a number of films that feel similar to it tonally and in terms of story. Again, while it has these similarities, it actually does feel like its own entity. That being said, though, it doesn’t do quite enough to completely separate itself from any of these films. It takes bits and pieces from them and uses them effectively but it also feels like we’ve seen many films like this one before. It doesn’t blatantly rip anything off but it doesn’t distance itself either. In that regard, The Watchers is sort of a double edged sword. Many of the aforementioned films are good company to be in which is why this is only a minor setback though.

On the whole, The Watchers is worth your time. Sure, it tends to remind you of a slew of other films but, as previously mentioned, it shares good company and still feels original enough. Its aesthetic qualities don’t stand up compared to other previously reviewed shorts like Here Lies Joe, The Ball, or The Story of 90 Coins, but you’re engaged with the tension filled story every step of the way regardless. The New York City backdrop is interesting to look at in many of the scenes. You can easily tell that that’s where the story takes place even if you didn’t know beforehand. Even through some of its minor setbacks, The Watchers commands your attention and keeps you guessing until the very last frame.

The Watchers from Timothy J. Cox on Vimeo.