In the past, we’ve reviewed two films from French filmmaker, Kévin Mendiboure. Both his 2017 feature, The Follower, and early 2020 short film, The Mannequin, were wonderfully shot and boasted unique horror atmospheres. Though The Follower had its faults story-wise, The Mannequin was a concise and eerily effective tale that showed growth for Mendiboure as a filmmaker. Mendiboure also released a second film on Halloween in 2020 that sticks with a similar formula as The Mannequin. For his newest film, Under the Bed, Mendiboure and his writer/co-director, Vincent Darkman, maintain a straightforward approach to storytelling while also seemingly channeling a legendary film and character in 1922’s Nosferatu.

The plot revolves around a young woman (Alexia Zahedi) being haunted by something in her bedroom. As she tries to sleep through the night, strange things continuously wake her up as she’s preyed upon by a creature that she used to see when she was young.

That’s really all there is to say about the plot. Like with The Mannequin, everything is kept simple and effective with Under the Bed. There are very few things that are more terrifying than being stalked at home in your own bed, as evidenced by films like A Nightmare on Elm Street, and the duo of Mendiboure and Darkman do a good job conveying that here. Everything from the ominous creaky floorboards, the shadows moving across the room, and all the way to the blankets being moved and ripped off the bed, it feels like the woman is being toyed with and hunted. As was the case in his other films, Mendiboure clearly has an understanding and appreciation for the horror genre and pays homage to some classic horror tropes with his films. 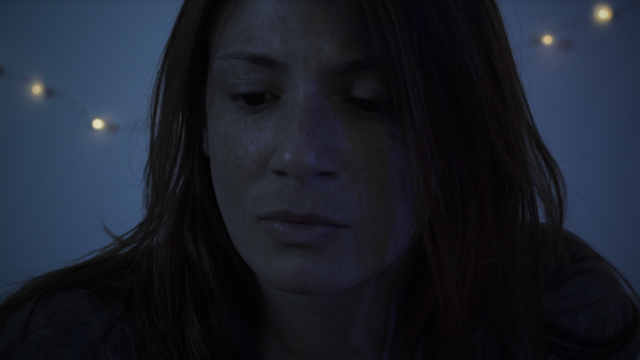 Another thing that Under the Bed has in common with The Mannequin is its star. Alexia Zahedi returns for another non-speaking role as the unsuspecting victim. Zahedi was quite good in The Mannequin as she showed some genuine fear while being tormented by a supernatural force. In Under the Bed, the threat is a little more physical and is something that she’s apparently experienced before according to the official plot description. Here, there’s a definite presence in the room and, at times, she actually is able to see it. While this role isn’t totally unlike her previous one, Zahedi is given a little more to do and reacts appropriately to her attacker. She’s great at playing a woman in distress while still having the courage to soldier on through the night instead of running out of the house screaming.

While the simple and effective approach is always welcome instead of overcomplicating things, one could argue that Under the Bed is maybe a little too simple. The film comes off as predictable and maybe slightly uninspired. While nighttime fears are certainly a thing, a lot of what happens in Under the Bed feels cliched and pretty standard for this type of story. This certainly doesn’t mean that this is a bad film by any means. Mendiboure and Darkman’s execution is excellent. It just seems like there could’ve been either more or something a little more original to set Under the Bed apart. Similarly, we have to commend the film for its obvious nods to F.W. Murnau’s 1922 silent film masterpiece, Nosferatu. Specifically, the first reveal of the creature is reminiscent of Nosferatu’s iconic rise from his coffin and there’s also the scene of a shadowy hand reaching for blankets that reminds of the classic stairway scene in Murnau’s film. However, the creature effects in Under the Bed are also a little too much like that of Max Schreck’s Nosferatu character. There’s no mistaking that the character was an influence on Under the Bed‘s creature upon that initial reveal. Speaking of the reveal, it does seem slightly out of place in the film and wasn’t really necessary at that exact moment. There’s a much more satisfying look at the creature shortly after that would’ve served just fine.

Even with its minor issues, Under the Bed is still a satisfying little slice of horror. As we’ve stated before, Kévin Mendiboure has a wonderful understanding and passion for the genre and, along with his writer/co-director Vincent Darkman, puts it on full display once again here. While Under the Bed has a few more criticisms than The Mannequin, it’s still very much on par with Mendiboure’s previous output. With its classic horror tropes, quality lead actress, and its spooky atmosphere, Under the Bed is another short horror flick that should satisfy genre fans.