Stop me if you’ve heard this one. Socially awkward man is looking for love. A both friendly and gorgeous woman moves in next door. Man becomes enamored with said woman and works his way towards building a friendship with her. Man makes his true intentions known even though the woman may not necessarily be welcoming to the advances. Confusion and humiliation take over. Horror ensues. This general plot outline would be accurate when referencing a lot of horror/thrillers and, for the most part, this is exactly how Marc Cartwright’s new short, We Die Alone, is laid out. However, this one is an exception because, even though the structure is similar, Cartwright’s film isn’t at all like its peers and that’s a good thing.

We Die Alone follows Aidan (Baker Chase Powell), the aforementioned socially awkward man, who spends his days working at a thrift store and his evenings arranging dates with women that he never shows up for. Unfortunately for him, the very thought of meeting a woman in person is terrifying and, instead, he routinely practices conversation in front of his mirror or a creepy faceless mannequin at his dinner table. The only female interaction he really has is with Elaine (Ashley Jones), an attractive friend and co-worker who seems to be into him. This is until a beautiful young woman named Chelsea (Samantha Boscarino) moves in across the hall. After locking herself out of her new apartment, Chelsea goes to Aidan for help. Immediately, Aidan becomes infatuated with Chelsea after she reveals they both share a fondness for puzzles. From here, the three characters become strangely intertwined with their differing perspectives on love and relationships.

First and foremost, we’re not going to delve much more into the plot. We’ve already said enough and we’re definitely not looking to spoil the experience that We Die Alone offers. The film starts out like an awkward drama with Aidan’s insecurities getting the best of him at every turn. Yet, there’s something sinister lurking beneath the surface in We Die Alone that you can just feel as you watch the film. Cartwright does an excellent job setting a mood not unlike Alfred Hitchcock’s Psycho where you know something is coming but not sure exactly what. 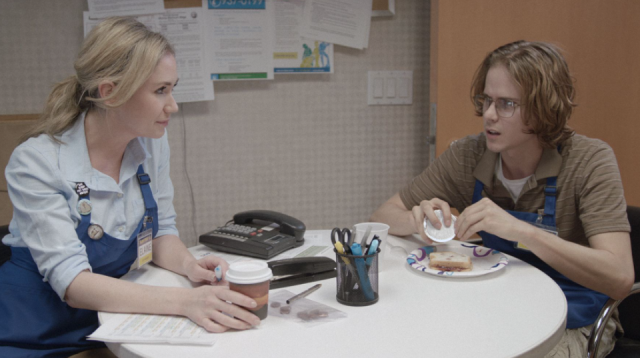 The look and sound of the film goes a long way in complementing the overall tone of We Die Alone. Cartwright’s environments appear lived in and paint a believable picture of humble middle class living. Much of the film is spent in Aidan’s apartment which is small and cozy while also feeling a bit claustrophobic and cluttered. It’s one of those films that explores every inch of its locations and, in doing so, never feels bland or underwhelming. There are so many little details scattered around that give these everyday locations some actual personality. Additionally, the music from David Williams is superb. As previously stated, it always feels like there’s something sinister lurking and the score perpetuates that. Even when the action onscreen feels innocent, eerie string sections slowly bleed in unnerving viewers.

The amazing trio of actors bringing We Die Alone‘s characters to life are the cherry on top of an already technically well made film. Baker Chase Powell is the star of the film as the impressively complex Aidan. On one hand, Aidan appears to be a very kind person who’s uncomfortable in his own skin. This, of course, attracts the attention of Ashley Jones’s tender-hearted Elaine who also falls into a similar category. Both Aidan and Elaine are characters looking for love but, while Elaine sees it in the person right in front of her, Aidan is apparently blind to her feelings. Instead, he opts for the modern day romance of online dating. His failures drive him to have a darker, perhaps more carnal, side of himself as he longs for true human interaction. Powell gives a perfect performance as someone you sympathize with but also kind of fear. The horror and thriller genres have molded these kinds of characters into sexually repressed monsters and Powell plays his part impeccably. Finally, Samantha Boscarino is fantastic as the cool girl next door, Chelsea. You can immediately see why Aidan desires her as she’s not only gorgeous and shares a particular interest but she also actually sees him. This gives him confidence and puts Chelsea in a tough spot following a certain interaction between the two. 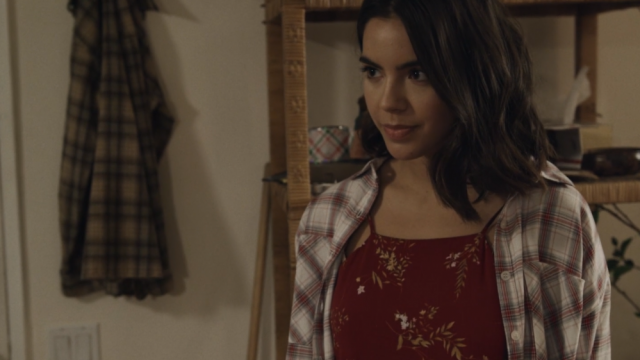 What really makes We Die Alone feel a step above the rest, though, is the film’s originality and subsequent shock value. Cartwright and co-screenwriter Cassie Keet put together an amazing script that contains all the familiar beats of horror/thrillers before defying expectations. Everything from the dialogue to the character actions keep you engrossed in the film so that, when the film decides to throw a curveball, you’re completely taken aback. It’s so refreshing to see a faithful genre film that’s also able to shock and wow. Kudos to Cartwright and Keet for crafting such a tight script full of familiarity yet originality all at the same time.

If there’s one complaint we have about We Die Alone, it’s that it’s not feature length. Yet, like Jeremiah Kipp’s Slapface, we can’t possibly fault the film for that. As is, it’s such a concise and wholly satisfying experience already. However, it does seem like there’s still a lot to explore here with the story and these characters that if Marc Cartwright ever wanted to revisit them, we definitely wouldn’t complain. We Die Alone is a flawless horror/thriller that will leave you clamoring for more. It fully embraces the common tropes of these genres while also having a few tricks up its sleeve. Simply put, it’s short cinema that you don’t want to miss.

*We Die Alone is currently streaming for free on Amazon for Prime members. Check out the trailer below.*