Do you see this picture of Kyle MacLachlan to the left here? Take a look. That’s how you feel after every single episode of Twin Peaks: The Return on Showtime. It’s unfathomable that a 26 year break in the series would lead to what amounts to be an 18 hour long experimental student film. Gone is the warmth and enjoyable mystique of the original series. Instead, we get more of the same perplexing storytelling from creator/writer/director David Lynch’s more recent film work.

We’re going to start this discussion off with a disclaimer. Anyone that has been reading Cinema Smack for any length of time knows that I don’t normally address myself personally in writing. However, it feels necessary before moving forward on this particular subject. David Lynch is a filmmaker with an extremely faithful fan following. In some peoples’ eyes, he can do no wrong. Personally, I like David Lynch and what he brings to the table. Films like Blue Velvet, Mulholland Dr., and Lost Highway are engaging and eerie experiences. Even Eraserhead has a spot in my movie library. That being said, this is about Twin Peaks. This isn’t about David Lynch being David Lynch. This discussion is coming from a viewpoint of what to expect from a show that shares a name with one of my favorite television shows of all time.

The story of Twin Peaks: The Return is relatively simple. Special Agent Dale Cooper (Kyle MacLachlan) has remained trapped in the Black Lodge for the past 25 years. His doppelganger, possessed by the essence of Bob (Frank Silva), escaped the Lodge at the end of the original series and he has also disappeared from the public eye. Meanwhile, strange occurrences begin in numerous locales such as Las Vegas, New York City, Buckhorn, South Dakota, and, of course, Twin Peaks, Washington.

It’s somewhat difficult to explain the full plot due to the avant-garde storytelling and excessive length of the revived series but, essentially, the real Cooper must escape the Black Lodge and stop his doppelganger. Along the way, much of the original cast is reintroduced in connection to this idea. Deputy Chief Hawk (Michael Horse) receives cryptic phone calls from the Log Lady (Catherine E. Coulson) and the murder of Laura Palmer (Sheryl Lee) 25 years ago begins to creep in along with the unknown whereabouts of Agent Cooper. FBI Deputy Director Gordon Cole (David Lynch), Agent Albert Rosenfield (Miguel Ferrer), Agent Tammy Preston (Chrysta Bell), and, eventually, Cooper’s unseen secretary in the original series, Diane Evans (Laura Dern), are on their own hunt to find Cooper. 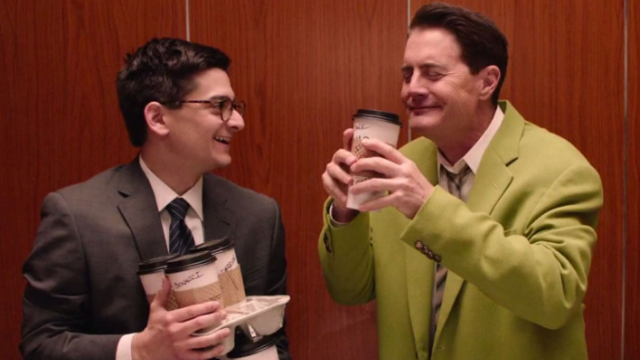 In its simplest form, the plot actually sounds pretty intriguing and it is. Though, it’s the execution that does the series a complete disservice. Before anyone lashes out with a “just because it’s different means that it isn’t good?” argument, let’s address that right now. No, just because it’s different isn’t a death knell for The Return. The problem is that this isn’t Twin Peaks. Sure, a good chunk of the original cast returns for the revival but they’re in cameo roles at best. Also, it’s so rare that the show remains in Twin Peaks that the town mostly serves a cameo role as well. Even Kyle MacLachlan as Cooper is a complete letdown as he’s actually not Cooper for most of the 18 hour runtime. Either he’s the evil doppelganger or in a near vegetative state as Las Vegas resident Dougie Jones.

Whenever we get a glimpse of the characters we love from the original, it never really amounts to anything. There’s never any payoff for their brief storylines or insight into what the last 25 years have been like for them. What happened between Shelly Johnson (Mädchen Amick) and Bobby Briggs (Dana Ashbrook)? Why is Dr. Lawrence Jacoby (Russ Tamblyn) a conspiracy driven madman? What’s going on with Audrey Horne (Sherilyn Fenn)? How in the world are Big Ed Hurley (Everett McGill) and Norma Jennings (Peggy Lipton) still not together? We don’t really get any of those answers (save for the last one) but we certainly get to watch Cooper (as Dougie) play slot machines for a long time. That “Got a light?” episode was sure something right? 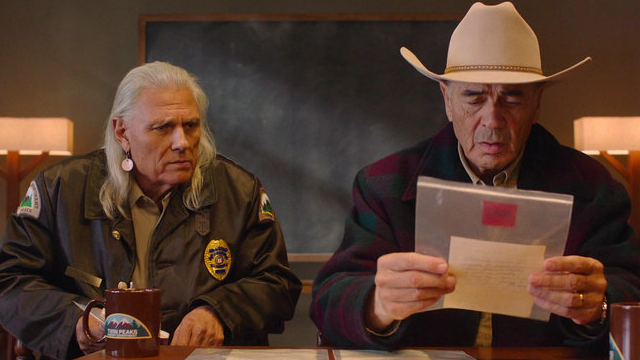 While Twin Peaks: The Return was a virtually joyless and maddening 18 hour experience, it wasn’t all bad. Any time one of the original characters makes an appearance, your interest is instantly piqued. The return of the real Cooper after about 16.5 hours is a welcome breath of fresh air. Even Sheriff Frank Truman (Robert Forster) was a nice addition to the cast as Harry Truman’s brother after Michael Ontkean’s decision to remain retired from acting. One of the coolest things about Twin Peaks: The Return is that nearly every episode ends with a musical performance at the Roadhouse. “The” Nine Inch Nails, Eddie Vedder (as Edward Louis Severson III), and Twin Peaks alumni James Marshall (as James Hurley) and Julee Cruise are all musical guests at one point. It was a unique way to cap off the episodes and a nice break in between parts if you’re binge watching.

Perhaps the most puzzling thing about this series revival is how many people have actually praised it. Again, David Lynch does have a cult following which is most definitely a factor but still. Many are saying that there’s nothing like this on television and they’re 100% correct. Though, it’s difficult to consider that a good thing in this case. Once more, it’s not bad because it’s different. This just isn’t Twin Peaks. It shares a name and has character cameos. Other than that, it’s an experiment. If you’re a Lynch fan who loved it or even an experimental film junkie who can appreciate it for what it is, then the more power to you. As a fan of the original show, Twin Peaks: The Return is a monstrous disappointment despite its massive intrigue. It’s a semblance of everything that was great about the original and it’s hard to care about any of the mysteries left in the woods this time around.