HBO has long been known as a pioneer for the modern age of television. Shows like The Sopranos and The Wire set the stage for the current trend of TV series becoming more cinematic. Now, the hour long non-stop thrill ride structure has extended to every conceivable network and across all genres. Perhaps unsurprisingly, HBO has continued to remain at the forefront of this television movement all these years later. With their most recent phenomenon, Game of Thrones, meeting its end last year and becoming the cable company’s most watched show of all time, HBO has been left with something of a void. After an unbelievably promising start, some may have tagged the science fiction/western drama, Westworld, as a worthy successor to carry the torch into the future. However, with the show’s third season wrapping up last night, it’s clear that Westworld has lost its way and could be too far gone to make a comeback.

Created by Jonathan Nolan and his wife, Lisa Joy, the show first hit living rooms on October 2nd, 2016 to huge success as it ranked as the most watched first season of any show on HBO. It’s an adaptation of Michael Crichton’s 1973 film of the same name about a western themed adult amusement park where guests interact with lifelike androids however they please. The first season is riveting episodic television with its stellar cast, abundant mysteries, alternating timelines, and an intriguing dialogue on consciousness and sentient beings. It’d be a year and a half before Season 2 premiered to much more middling results. While it starts out strong, the season begins to meander by its halfway point. Even though the main storyline revolving around certain sentient android hosts fighting for freedom is unique and thrilling, much of the story turns into nonsensical jargon by the season’s end. Characters die only to inexplicably return and new plot elements often go unexplained.

Unfortunately, Season 3 goes even farther down this convoluted rabbit hole. At the end of Season 2, Dolores Abernathy (Evan Rachel Wood) finally escapes the Westworld theme park, albeit in a host body of Charlotte Hale (Tessa Thompson). Dolores wastes no time manufacturing new bodies for herself and the other pearls containing host profiles she stole on her way out of the park. In 2058 Los Angeles, Dolores apparently sets out to infiltrate and put an end to human life. Meanwhile, Bernard Lowe (Jeffrey Wright) is set up to try to stop Dolores as he teams up with former Westworld head of security, Ashley Stubbs (Luke Hemsworth). Charlotte Hale, inhabited by an unknown host, maintains the illusion as the Executive Director of Delos Destination, Inc. while working for Dolores. Maeve (Thandie Newton), who Season 2 focused heavily on, is trapped in a virtual construct and must find her way out if she ever wants a chance at stopping Dolores as well. William AKA the Man in Black (Ed Harris) has a mental breakdown following the death of his daughter by his own hand while the mysterious Caleb Nichols (Aaron Paul) is targeted by Dolores to aid her in her plan.

In all honesty, most of the plot really doesn’t matter for Season 3. It’s such a God-awful mess most of the time that you’ll never really know what’s going on anyway. In theory, there should be a ton of intrigue behind which hosts are in what bodies and what Dolores’s master plan is. Despite her best efforts though, it rarely feels like there’s anything at stake prior to the final episodes. Sure, people die but death only ever follows the sentient hosts and nothing really ever stays dead in Westworld. Life tends to just carry on as usual for everyone else worldwide. Most of Season 3’s story is told through lengthy, drawn out monologues from each character. It’s not often that viewers are allowed to discover things through revelatory moments and it makes it extremely difficult to care about anyone or anything. 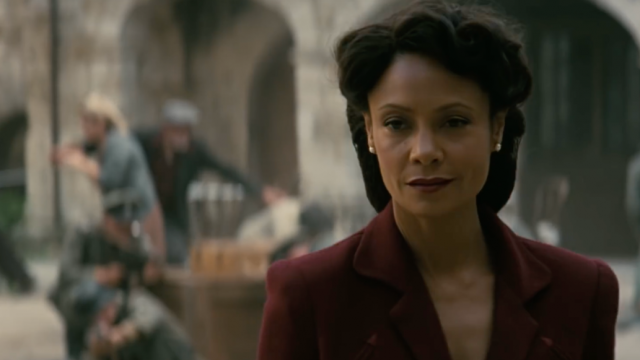 It’s a real shame since one of the biggest appeals of Westworld has always been the show’s characters. Sadly, these are not the same characters we’ve come to know in the previous two season. Quite frankly, there really isn’t a single likable character for more than a few fleeting moments throughout all of Season 3. Dolores has basically become a lifeless Terminator with a contrived twist ending at this stage of her character arc. She was so wonderfully written in Season 1 as someone in search of beauty in the world and for her kind. There’s hardly anything resembling that character for most of the new season. All of Bernard’s Season 2 struggles are largely forgotten here. In turn, this makes him much less sympathetic and relatable. Maeve and the Man in Black are often on the outside looking in for this go-round and usually inconsequential to the main plot except when it’s convenient. Tessa Thompson’s Charlotte Hale suffers from “Altered Carbon syndrome” as Thompson replicates a deceased character while portraying a different host in her body. All the confidence and swagger of Season 1’s Charlotte is gone. What’s left is another lifeless shell of a character whose motivations are never quite explained.

Then, we have the show’s new characters. Aaron Paul is the biggest addition to the cast as ex soldier Caleb Nichols. Unlike Paul’s iconic portrayal of Breaking Bad‘s Jesse Pinkman, there’s just nothing to latch onto. Suffering from memory loss and a splash of PTSD, Caleb is a mere pawn  in Dolores’s game whose role is never clearly defined. Eventually, his past is revealed by him talking to a disembodied voice for about two thirds of an episode. Believe it or not, it doesn’t really get you invested in his character arc especially since it takes seven episodes to get there. Vincent Cassel as Engerraund Serac is tabbed as a new series baddie of sorts. Though, he’s usually just wasted and it’s hard to say what he even wants most of the time. It’s just someone to root against in a sea of characters that also don’t know what they want. 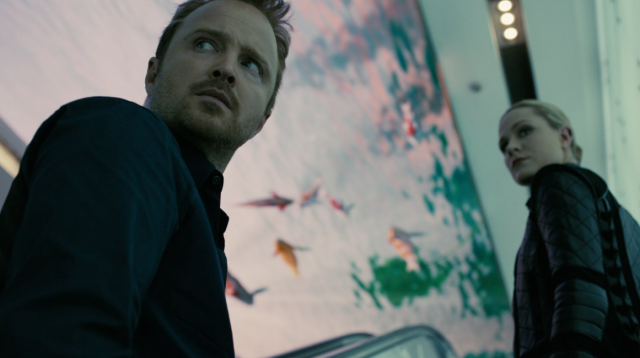 Now, it must be stated that these flat characters are not from a lack of effort. All the actors are into their roles and do the best with what they have. The cast itself is loaded with quality names from Evan Rachel Wood and Ed Harris down to Marshawn Lynch (yes, that Marshawn Lynch). It’s just that the storytelling is so bad. As previously mentioned, most of the show’s “big moments” are revealed during character monologues. When there are so many unreliable characters trying to tell a story, it’s hard to really side with anyone. Thandie Newton’s Maeve is probably the most likable but even that’s hard to say when she’s positioned as a sword toting henchman to Serac by the time Dolores is trying to see her plans through. When the show isn’t being long winded and wordy, it’s hitting you with nonstop action sequences. There’s an alarming amount of fist fights throughout Season 3 that it sometimes feel like you’re watching a John Wick or Matrix copycat flick. At least the action seems to lighten the mood a bit but, needless to say, Westworld never really touted action scenes as a selling point in the past.

That’s Season 3’s biggest problem in general. It just isn’t what we’ve come to know and love about Westworld. It’s not bad because it’s different. It’s bad because it’s bad and doesn’t resemble anything associated with its name. Even the park rarely makes an appearance so it shouldn’t even be called Westworld at this point. What started out as a humanizing, character driven, thought piece on freedom and sentient life has turned into an overly complicated sci-fi action drama. Gone are the sweeping fields and rolling hills of the old west and, in its place, is a sterile, futuristic metropolis devoid of anything real. You could call the stark contrast in locale a critique on humanity’s destructive, self-serving tendencies but what’s the point? We have films like Blade Runner for that and Westworld doesn’t even care enough to delve into those kinds of ideas for itself with this season. Who’s even the audience for Season 3? Judging by the show’s cratering viewership, which dropped over one million viewers between season premieres, whatever audience it has is dwindling.

While Season 2 had its role to play in alienating fans of Westworld‘s debut season, Season 3 may drive them away for good. When the show teases anything that remotely feels like Season 1, it immediately commands your attention. Then, it goes back to its sci-fi babble mixed with curious action and your brain clicks back off. In the past, the show was must see television where you couldn’t wait for the next episode. Now, it’s a challenge to even make it through one without shuffling off to grab a snack, play on your phone, or do something more constructive with your time. For the most part, Westworld Season 3 is just boring. When it’s not boring, it’s confusing. When it’s not confusing, it’s hitting you with fist fights, explosions, and gunplay. The show, which was once full of mystery and wonder, has become a chaotic mess and devoid of the emotion that originally made it so compelling. If this is what Westworld has become, maybe we’d be better off with all humanity being wiped out.