Ever since The Blair Witch Project was released back in 1999, the found footage shooting style has often been a trope of the horror genre. Of course, The Blair Witch Project was not the first film to use the style since films like Cannibal Holocaust were released years before it. However, it was a massive hit that revitalized the subgenre. Since then, we’ve had the Paranormal Activity series, REC/Quarantine, and countless other found footage films that have been released. In 2016, even the Blair Witch reboot would’ve performed well at the box office had its promotional budget been lower. It’s no surprise then that filmmakers continue to embrace the style. Most recently, German writer/director Daniele Grieco has done so with his film, UFO: It Is Here.

UFO is Grieco’s second found footage horror film. It follows his haunted castle sleeper hit, Die Präsenz AKA The Presence. The Presence gained popularity via social media as thousands of German fans voted for the film to be played in theaters in their respective hometowns. With UFO, Grieco looks to capitalize on the success of his previous film by sticking with the same filming style. It was shot in Germany, Belgium, and at rock formations in Luxembourg.

The film follows a group of five friends: Melissa, Paula, Leo, Erik, and Andre. They’re played by Laura Berlin, Olga von Luckwald, Dennis Mojen, Leonard Hohm, and Jan Walter respectively. Initially, they’re filming a documentary about a local zoo when they see what they believe to be a meteorite crashing to Earth. They abandon the zoo project and seek out the cratered meteorite instead. From there, they discover something not from this world and must work together to survive. 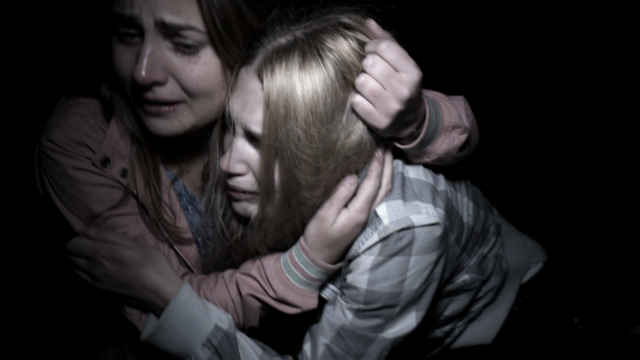 Firstly, it should be said that if you’re already not a fan of found footage, then UFO won’t change your opinion. While aesthetically it looks better than something like the original Blair Witch Project, it’s very much in the same vein. There are quite a few shaky cam sequences, glitches in the video, and characters responding to the camera. That being said, there are more quality shots in this film than in most others in the subgenre. The stunning visuals of a silhouette in the woods, a purple skyline, and a small, beautiful waterfall cascading over the rocks juxtapose the terror that the characters endure. In short, there is beauty mixed in with the horror.

The characters themselves are also relatively likable. While we don’t get to spend a lot of time with some of them, they are portrayed realistically given the situation they’re in. Paula doesn’t want to chase after the object that falls from the sky as she wants to finish their documentary. The male characters want to abandon the zoo project for something that they feel could be more interesting and profitable. Leo is so enthralled with the creatures they discover that he’s often willing to risk his safety for a better understanding. Though, he is protective of the females and is mindful of trying to keep them safe as well.

Perhaps the best thing about UFO is its usage of practical special effects. Unlike the aforementioned Blair Witch Project, there’s actually a decent amount of blood and gore in this film. Blood is scattered on a number of trees as a sort of warning to the characters. Also, at one point they find a cow that has seemingly been attacked and essentially ripped apart. It’s sort of reminiscent of the scene in David Cronenberg’s The Fly where a baboon is teleported and turned inside out. The alien effects are quite good as well. While we never get a full view of what they look like, there are some disgusting effects that give the aliens life and establish them as an imposing threat. These effects are more similar to Ridley Scott’s Alien which director Daniele Grieco has cited as his biggest influence. 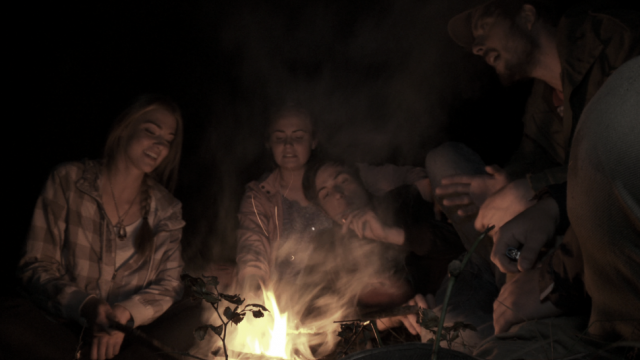 As with almost all films, UFO is not perfect by any means. What it achieves in terms of technicality and effects, it lacks in originality and creativity. Essentially the film is The Blair Witch Project meets science fiction. In fact, the first 30 minutes or so of the film is almost an exact copy of The Blair Witch Project. If that’s what Grieco strived to recreate with UFO, he definitely succeeded. The found footage style of the film works well enough yet it’s not hard to argue that maybe a more traditional method of filmmaking may have set this film apart from its contemporaries.

Again, UFO: It Is Here is not perfect but it does still have an appeal. The scenes that focus on the characters facing off against the aliens are tense and chilling. The practical effects work will make you squirm through gross out effects and erratic movement from the creatures. When UFO is at its best, it’s a lot of fun. Yet, sometimes you just wish that it was a tad more original. With UFO: It Is Here, Daniele Grieco has proven that he is a competent filmmaker. However, with some refining, his best work lies yet ahead.