It’s been quite some time since we’ve reviewed anything from our friends over at the artist collective, Count the Clock. Right before the national shutdown due to the pandemic, we reviewed a back-to-basics horror short called The Knock (which was excellent) and, prior to that, we had our first interview feature on this site with Count the Clock’s director/creator, Zach Lorkiewicz. Since our last correspondence and in the downtime from the pandemic, Lorkiewicz has tried something different with the most recent Count the Clock release, The Ghost House. Stylized as the ghost house, this new short film has a different feel from previous work by Lorkiewicz and company but maintains the unique boldness that Count the Clock is known for.

The film is an experimental/avant-garde horror short that focuses on the strange activity occurring within a house. Stationary cameras around the house catch unnatural movement and appearances from an individual that viewers will have to piece together their own backstory for. Is this person alive or dead? Cursed or just disturbed? What is the story here and how did it get to this point?

the ghost house is one of those films that’s sure to polarize viewers as you only take away what you choose to put back into the film. As a standalone narrative,  there’s not much to it. However, if you closely watch the action/reactions, background, visual clues, etc., there’s a lot to speculate on and brainstorm. Again, how did things get to this point? Is the subject of the film just crazy or is there something more menacing to fear? These are questions that aren’t specifically answered for the viewer but something that viewers will have to answer for themselves in their interpretation of the film. In this respect, the ghost house challenges its audience to delve deeper instead of simply telling them what to expect and think. 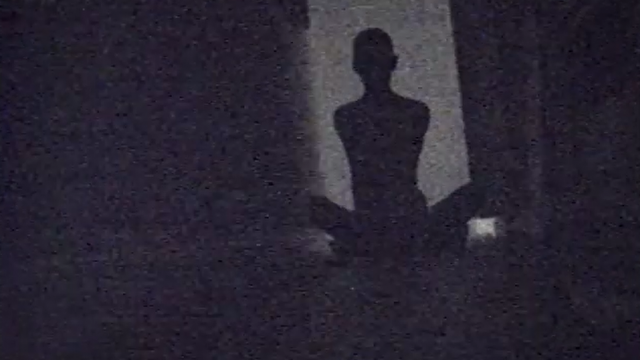 When discussing Count the Clock releases, the term “pop horror” is the most common go-to when describing the genre, aesthetic, and overall style of their work. In another big change from the Count the Clock norm, the ghost house is perhaps the farthest thing from pop horror. The visuals are dark and grainy instead of the bright, vibrant, and cotton candy-esque visuals of so many other films from the group. The film is stripped of the usual sinister fun of titles like The Ball and Bubblegum with only an uncomfortably disturbing viewing experience left behind. Watching the film is like monitoring home surveillance footage and being unable to explain anything you’ve just seen as you feel your skin crawl from start to finish. It’s as if you’re seeing someone live out their own personal nightmare on video.

Now, in saying this, the ghost house definitely isn’t a film for everyone. It’s missing a lot of what makes every Count the Clock production a must-see spectacle with its bare bones approach and ambiguous storytelling. Because of this, there are people who simply won’t get what Lorkiewicz is going for and others who may find the film to be boring. While it’s true that there’s not much going on here, it must be repeated that the ghost house is a film that depends solely on the viewer. If someone chooses to search for a deeper meaning or look to interpret what exactly is happening throughout the film, they’re going to love this new style. On the flip side of that, those looking for the simple, effective, and, zany stories they’re used to from the artist collective, this film will fall short of expectations.

For us, the ghost house falls somewhere right in the middle. This evolution from pop horror into avant-garde/experimental horror is a breath of fresh air and shows range from Lorkiewicz even if that uniquely distinct Count the Clock pop horror flair is greatly missed. Still, Lorkiewicz was smart to leave it out of this project because the ghost house is something different. Despite its experimental approach, it’s more in tune with traditional types of horror than its more zany Count the Clock contemporaries. Again, its shows range and maturity for the collective and its director and further proves that Zach Lorkiewicz is a bold filmmaker who’s not afraid of taking risks.