Are you ready to hear something absolutely crazy? It’s been a full two years since a Marvel film has been reviewed on this site. With Phase Three of the Marvel Cinematic Universe ending with 2019’s Spider-Man: Far From Home, moviegoers got a bit of a break from the unparalleled and seemingly never-ending superhero franchise. Of course, the COVID-19 pandemic played a hand in this as well but I digress. In that time, Marvel has made a successful return to streaming television with WandaVision, The Falcon and the Winter Soldier, and, most recently, Loki all landing on Disney+ for subscribers but little has been revealed about Marvel’s Phase Four outside of some new trailers for upcoming films. So, with all that time in between theatrical releases, a big, bombastic start to Marvel’s newest phase was clearly in order. This is why Marvel decided to launch Phase Four with Black Widow, a film about a character that surely isn’t going to be a part of the future of the MCU. Wait… what?

The film opens in 1995 Ohio with Russian undercover agents, Alexei Shostakov/Red Guardian (David Harbour) and Black Widow Melina Vostokoff (Rachel Weisz), fleeing from S.H.I.E.L.D. agents with their surrogate daughters after successfully stealing intel. Upon the family’s arrival in Cuba, the young daughters, Natasha Romanoff (Ever Anderson) and Yelena Belova (Violet McGraw), are taken by General Dreykov (Ray Winstone) to the Red Room where they’re trained to be Black Widows themselves. Fast forward to 2016 and Natasha is a fugitive on the run after violating the Sokovia Accords in the wake of Captain America: Civil War and flees to Norway. Here, she receives vials of a synthetic gas that neutralize the mind control agents given to the Black Widows from an older Yelena (Florence Pugh). The two soon reunite with the villainous Taskmaster in hot pursuit of the vials for General Dreykov who’s presumed dead after Natasha supposedly killed him years prior.

Let’s pump the brakes a little bit here to start. Going forward, we’re going to assume that anyone reading this is all up to date on the MCU. If you haven’t seen films like Avengers: Infinity War and Endgame, consider this a spoiler warning. On paper, the plot of Black Widow is all over the place but, in execution, it’s not too difficult to follow. Although the MCU timeline has never been a straight line through each subsequent release, it still feels strange to just drop the story of Black Widow right in between two of the biggest event films in the franchise. Yes, it’s the most logical place in the timeline for a story about this character but it’s still too little, too late as we already know Black Widow’s fate from Endgame. It’s even more maddening that this is the first film of Phase Four. Why? After Infinity War and Endgame, Phase Four feels like a proper reset point for the MCU to veer off in new directions. This film simply feels old and stuck in the past instead of showing viewers the future of the MCU.

Now, let’s talk about the character of Black Widow/Natasha Romanoff. Scarlett Johansson first debuted as the character in 2010’s Iron Man 2 and has been a staple of the MCU ever since. Despite being a fan favorite, Johansson’s Widow never received top billing until now and, again, it feels like it’s a one and done. Fans have long wanted a solo Black Widow film and for good reason. Instead though, Marvel wanted to give fans a different type of female hero and 2019’s abysmal Captain Marvel became the focus instead. Back in 2016, we published an editorial questioning Hollywood’s idea of strong female characters and heaped praise onto Johansson for her portrayal of Black Widow and this still applies now. Marvel clearly didn’t appreciate what they had in this character while trying to make Brie Larson’s Captain Marvel into the female Tony Stark to lead the way into Phase Four. This clearly didn’t work as well as they hoped and here we are with a throwaway Black Widow film after the character has already perished. 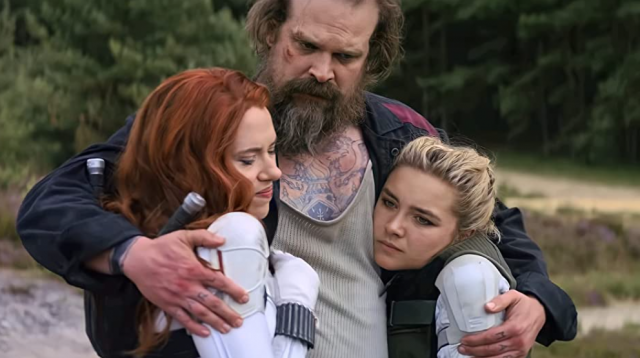 Alright, alright. We know that Marvel missed the boat a little with this solo adventure but that doesn’t mean that it’s bad. It’s actually a solid spy flick (as it should be) that shows that Johansson’s Widow could’ve been much more. Viewers finally get some backstory on the character and are also introduced to an endearingly dysfunctional family unit as well. Of course, Johansson is a welcome sight back in the role and the film doesn’t feel like it’s too big for someone who’s long been a secondary character in the MCU. Yet, the standout of the film may be Florence Pugh as Yelena. We’ve said before on this site that Pugh is an absolute star and she makes Black Widow a much better film just by being in it. Johansson and Pugh have chemistry as the surrogate sisters and it’s fun to watch them feud and bond all at the same time throughout the film. Then, there’s David Harbour’s Red Guardian who plays mostly for laughs but also has some touching moments with his “daughters” every now and then. Rachel Weisz isn’t quite a standout as Melina but she’s still solid and rounds out a nicely assembled group of heroes (for lack of a better term).

The same cannot be said for Black Widow‘s villains. Despite being the superhero juggernaut that it is, the MCU has sorely lacked memorable villains. Only a handful, such as Michael Keaton’s Vulture, Michael B. Jordan’s Killmonger, and, of course, Josh Brolin’s Thanos, have made any kind of lasting impression. The weird thing about Black Widow is that it hardly even has any villains. Sure, there are bad people doing bad things but they’re a complete afterthought. The Taskmaster is used as an average at best plot twist and the film’s actual villain, Ray Winstone’s General Dreykov, is barely even seen until the the very end of the film. In addition, the history between Black Widow and Dreykov is quickly glossed over and largely unexplained that it’s hard to even care about their final altercation. Winstone is kind of like this film’s version of Jeff Bridges’ Iron Monger from the original Iron Man but with even less to do. By now, it’s inexcusable that Kevin Feige and the Marvel executives haven’t made a bigger push for the MCU’s villains and Black Widow is a horrible offense in this department. 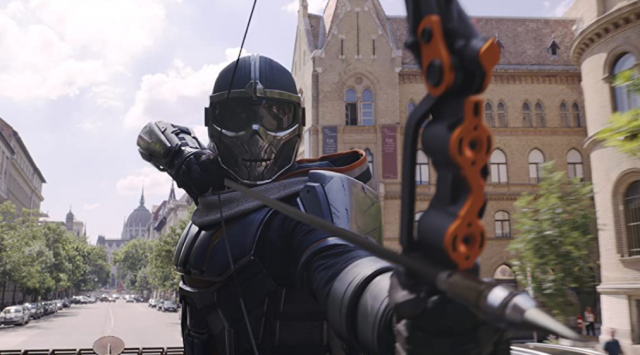 Even though much of this review has been spent dumping on it, it should be reiterated that Black Widow really isn’t a bad film at all. However, it does suffer from some of the usual Marvel issues as well as its belated release. There’s also another area where the film falters a bit and it’s with the filmmaker itself. Frankly, you’d be hard-pressed to find someone who knows who director Cate Shortland is. As evidenced by her IMDb page, she’s directed four features in the past 17 years with Black Widow being the biggest of them by far. Now, does this mean that Shortland’s not worthy or capable of the job? Absolutely not. What is easy to see, though, is that she’s clearly never directed an action film before because the rapid paced, shaky cam action sequences in Black Widow will make the Russo brothers’ heads both explode. Long have we criticized the ugly action in many of the Russo’s MCU installments but their efforts would be much more appreciated here over Shortland’s. Obviously, editing and camerawork have a role to play as well but Shortland’s inexperience in this department shows through most of all.

Once again, Black Widow is a fine film. It’s unlikely to be anyone’s favorite or most hated in the Marvel Cinematic Universe. It’s a film that’s just kind of there and, for the most part, it’s an enjoyable little spy film with some fun family elements thrown in. Yet, this is not the type of start desired for Phase Four of the MCU and it’s actually quite regressive. It’s a film that’s firmly set in the past and really has nothing to add to the MCU’s future. It was an inevitable film that seems to have been treated more as an obligation than a project with passion and vision behind it. For fans of the Marvel Cinematic Universe, Black Widow is alright. For those looking for the next great superhero flick, you’ll be waiting a bit longer.